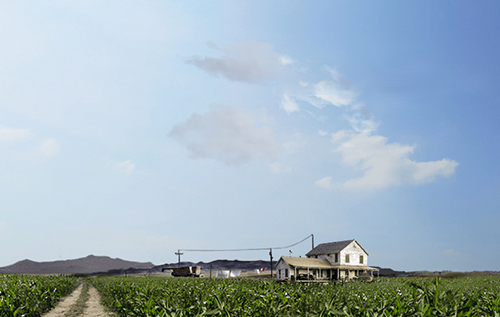 My apologies to Paul and the readers for the lack of a post from me on Wednesday. Now that I’m back from the family vacation, I’ve actually spent quite a bit of time on the interwebs today and noticed that a few trailers have debuted that definitely peak my interest. I dare say that some of them warrant a viewing in the actual theater! Woo hoo! By the way – the picture I’m using for the post today is from Christopher Nolan’s – Interstellar movie. Go to the website http://www.interstellarmovie.com/ and punch in this code 7201969,which is the date of the Apollo 11 moon landing, that will give you access to arguably one of the best trailers this year. (Will I see this? – heck yes I will!)

Huh?! So wait, the guy running the asylum is or should be a patient? What does Kate Beckinsale’s character do exactly? Is Jim ever going to do anything better than Across the Universe? Questions upon questions. (Will I see this? – rental)

I’m a big fan of the entire cast for this movie, but it seems like such a long shot for an actual wide release (in theaters) that I doubt it will come to my town. That said, it looks good. (Will I see this? – rental)

Not my generation and I still don’t get why it was ever a thing. I’m not sure what to say here – I guess I won’t have to do a “It Should Be A Movie By Now” post for this… Antonio’s kids must be super proud though, he does all these kids movies and they probably get a huge kick out of seeing their dad in them. (Will I see this? – nope)

Can someone please explain this to me? Or should I find this “graphic novel” and figure it out for myself. Hey at least the chic from Arrow is doing more with her talent I guess. (Will I see this? – rental, maybe)

Night at the Museum: Secret of the Tomb

I’d say that this was a shameful way of just going out for more money if none of the actors from the previous films showed up, but they did!? The first movie was original and fun but aside from that I must just be missing something. Do that many kids want to see this for it to be profitable enough to even pay the wages of all the actors in this? (Will I see this? – rental)

I’m a fan of Bateman for some odd reason. I think Bad Words was one of the more clever movies that he’s done in a long while. This looks to be not on the same level as that, but charming and possibly funnier than the trailer leads on. (Will I see this? – maybe)

I haven’t read the book and I don’t want to. I do however think this movie looks awesome. (Will I see this? – yes)

The Hobbit: Battle of Five Armies

Finally we’re going to wrap this trilogy up. I think that it would’ve been best at 2 movies but Peter Jackson saw it fit to allow it 3 so that he wouldn’t leave one single word out. At least the early response and speculation has been positive about it. The 2nd was better than the 1st so here’s hoping the 3rd trumps the others. (Will I see this? – yes)

Listen, if PSH says she can do it – then by god who’s to challenge what he says?! My wife and I eagerly await this and wish it wasn’t being cut up into 2 films. Hopefully the final one will blow our expectations away. (Will I see this? – yes)

I think I’ll have to place my trust in George Miller for this. I was never a fan of the first franchise of Mad Max films and I’m still on the fence for this one. Regardless, Tom Hardy is a big factor that entices me to want to see it.  (though, Charlize seems to be the main star if you were to go by the trailer) (Will I see this? – yes)

Air
https://www.youtube.com/watch?v=HxCw1n67jW4
I have no idea. Is this about Daryl and what he did before the Walking Dead happened? No really, can someone shed some light?  (Will I see this? – I have no idea)

Chalking this one up as this year’s dark horse. I think it’s nice to see Harry getting other work and some original stuff too. Looks promising and might very well be a contender.  (Will I see this? – yes)

Another teaser that really doesn’t tease enough. I know it’s supposed to be a musical and pay homage to the Grimm Fairy Tales so there’s that I guess. I’m crossing my fingers for this one and hope that it fares better than some of Disney’s past live action films (in the fantasy realm).  (Will I see this? – maybe)

There were also plenty of television show trailers that debuted this week that I would highly recommend. Such as Arrow, Gotham and the Flash just to name a few. Anyone going to go see GotG this weekend? Did anyone see it Thursday night at midnight? Well let me know what you thought of this week’s trailers and if you’re looking forward to any that I might’ve missed.

So I was about to write a list of “Once Great Directors Who Are Struggling” including, in my opinion, Steven Spielberg and Ridley Scott. over the last ten years or so But I remembered that…

httpv://www.youtube.com/watch?v=-UpxsrlLbpU Behold the Raytheon XOS 2 exoskeleton, the latest advancement in power suit technology. How cool is it? Cool enough that the company thought it wise to bring in Iron Man actor Clark Gregg (of…

I’ve written my official review of The Dark Knight Rises, and if you want to check it out, you can do so here where it was published an hour ago. Like most reviews, I tried…

The good students of CalArts character animation class had a very special project recently, to create Tron-ized versions of other Disney franchises after the release of Tron Legacy this weekend. The result is a pretty…