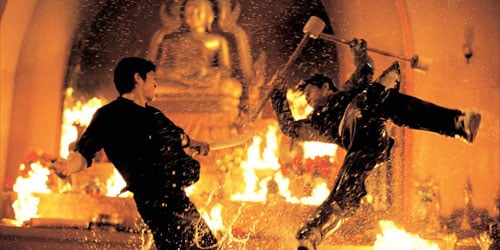 The other day, I wrote about the greatest one-man wrecking machines in movies. This article is similar, but kind of the exact opposite. Instead of one guy (or girl) destroying an army, I wanted to lay out what the greatest 1 v 1 match-ups have been throughout the history of cinema, complete with video evidence. Of course I a probably missed some, so feel free to let me know in the comments, as I’m know you will.

There were a million different Jet Li fights to choose from, but this scene from Fearless is the ultimate David v. Goliath scenario. And it’s probably a dig against American big-dick-ism as well.

Eventually the Black Mamba killed all of her snake-named counterparts, but it was this intial fight with Cottonmouth that was a memorable cavalcade of suburban destruction.

I subscribe to the philosophy that Tony Jaa could kick Bruce Lee’s ass if he was alive today. This fight against a steroids abusing henchman has some of sickest Muai Thai moves you’ll ever see in your life.

9) Gladiator – Maximus vs. Tigris of Gaul

His group fights may have been more entertaining, but it’s the tigers that make this fight unforgettable. You’re the only undefeated arena champion in history and you lose to a guy on his back with a 400 pound tiger on him, come on!

Honestly I forgot all about this movie until I was researching for this list, but after refreshing my memory I can safely say that this might be the most impressive display of swordplay I’ve ever seen on film.

7) The Bourne Identity – Bourne vs. Assassin

It’s brutal, it’s raw, and dude gets stabbed with a pen. Bourne had many fights like this throughout his three-film career, but this initial one was certainly the most memorable.

6) The Empire Strikes Back – Luke vs. Vader

Definitely among the most iconic on the list, it’s only rated this low because of the actual action. In terms of a scene, it’s phenomenal, but the swordplay leaves something to be desired. Slash. Talk. Slash. Talk.

Or more accurately, Jack vs. Himself. You would think after realizing you were the same person as the guy you were fighting, you’d be able to get a grip on yourself, but that’s not the case as Jack learns that the dominant half of his psyche can kick his ass all over the place.

Before Neo could fly and Agent Smith could make a million copies of himself, we had this subway platform brawl that featured some physics bending moves and some classic lines. “You hear that Mr. Anderson? That’s the sound of inevitability…”

3) Way of the Dragon – Bruce Lee vs. Chuck Norris

It was a tough decision between this and Bruce Lee fighting Kareem Abdul Jabbar in the same movie, but you have to go with the Norris here, am I right? Clean shaven (except for his chest), Chuck was a formidable opponent for Lee, until he got all of his bones broken.

He may not have won, but the road to get there was one of the most exhausting fights ever filmed on screen. Not just choreography and wires, this fight scene is brutal, bloody and stays with you long after the film ends.

It’s relatively simple really, but the comination of immediate danger, comedy and Indy himself makes for one hell of a fight. Sure Indy won because the other guy was an idiot, but that doesn’t make it any less badass.