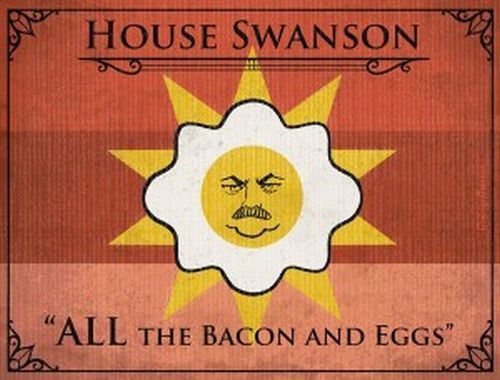 Sadly, this is not a full gallery of house sigils for Parks and Rec characters like we see above, but it is a funny quote from Amy Poehler. I don’t normally feature quotes alone as content, but I really did like this one.

Well, come on, I would be Khaleesi [Daenerys Targaryen], of course. Ben would probably be Jon Snow, because he’s so tormented. Ron would be Stannis Baratheon…And Tom would be…Uh oh, I hate to break it to Aziz [Ansari], but Tom would be, like, Theon Greyjoy, which is not good right now. Ann would be Sansa, April would be Arya, and Andy would be one of the dragons.”

That’s pretty perfect casting, and even though Parks and Recreation isn’t Community, I would love to see them do an episode like this. They mention the show all the time in relation to Ben’s nerdity (and every time my fiancce gives me a knowing look), so I say they go for it and do a full themed episode somehow.

Why do I do the things I do? Why do I willingly submit myself to horrors like Fox’s Dads, which may have one of the worst TV pilots of all time? Because I love you…

It’s hard to believe that there has only been 6 episodes of Ripper Street season 3 so far as so many major events have occured. We have had Susan descending into a corrupt political life…

What you’re looking at here is infamous Roman Emperor Caligula on the left, and infamous Ruler of the Seven Kingdoms Joffrey Baratheon on the right. The resemblance is uncanny, but the two have more in…

These days I feel as if it’s hard for me to get into a new show. I’ve discovered most of the worthwhile niche programs, and classic shows I’ve missed like Buffy or the X-Files are…