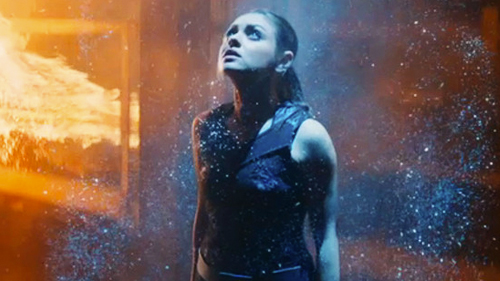 I’m telling ya, I’m so glad it’s Fall! I know I’ve already gushed about how TV and football have made their triumphant return but you know what else starts making the comeback – movies. Not just any movies, good ones that I’m more inclined to pay for an actual seat in the theater to see. Seems like it’s been a long time coming but the trailers are pouring out and we’ve got stuff on the way!

I’ve gotta admit, I’ve been rooting for the Wachowski brothers … er, siblings to find that ever elusive magic in the bottle again. Time and time again my expectations for what they turn out are let down. Maybe I shouldn’t look forward to another “Matrix” event… (Will I see this? – yes)

I’m always a sucker for comedies no matter how bad they might be. This one reminds me of Hitch combined with My Best Friend’s Wedding … kind of. (Will I see this? – maybe)

Finally – a worth while trailer that helps bring some insight into what will make people actually want to see this other than the big fluffy white guy. (Will I see this? – yes)

Who doesn’t like a good time bending movie? DayBreakers, I felt, was a fresh and inspiring twist on the vampire genre and I left feeling satisfied with that film. The simple fact that this stars the same guy and is by the same people as that leads me to believe this could be worthwhile. *side note, anyone else notice how Ethan Hawke is enjoying doing these “indie-esque” films lately? (Will I see this? – maybe)

Apparently someone has watched too much Jersey Shore and has decided to end it all. I think it looks awful but who knows, maybe there is some wit to it that I’m unaware of.  (Will I see this? – nope)

I don’t think that the term “spy” is something I would put together in tandem with Colin Firth. However, this trailer has me slightly intrigued. On YouTube it was said that it’s the 2nd trailer, though I hadn’t seen it till this week. Did I miss something a while back?  (Will I see this? – maybe)

James Franco with Seth Rogan – yes, yes and even more yes. (Will I see this? – yes)

the Taking of Deborah Logan

Looks scarier than the Conjuring (which I liked by the way) but not near as creepy or original. Anyone else tired of the horror genre using the “found footage” angle? (Will I see this? – nope)

the Tale of the Princess Kaguya (trailer #2)
https://www.youtube.com/watch?v=tM6hcHp0_kU
I really just wanted to post this so you could see a much longer take on the film rather than what the first “teaser” trailer allowed. (Will I see this? – rental)

No seriously … is this a joke or is this movie trying to actually be serious? I’m so confused. This trailer is not cool. (Will I see this? – nope)

This is a film that I would never have believed was directed by Tim Burton had it not been for his amazing use of color. Aside from that, it seems like an offbeat drama that has the ties in to a “true story” … maybe the reviews will prompt me to want to see it. (Will I see this? – maybe)

People love watching old people fall in love. Why not, it’s endearing and good for the soul. Yet, it’s so incredibly played out and never seems to be anything NEW! (Will I see this? – nope)

Elle Fanning is desperately trying to earn herself an Oscar but it just doesn’t seem like she is finding the right material to do it with. I think she has talent but not enough to make me want to see this one. (Will I see this? – rental)

Who here liked Smokin’ Aces? Not me. With that said however, I thoroughly enjoyed Crank and Crank 2. I might have a problem … either way, with the ensemble assembled for this one – it might be worth my time. (Will I see this? – maybe)

Why is it that I have this suspicious feeling that I’ve seen this trailer already? Back me up on this, wasn’t it released a while back …? Did it get pulled for some reason and then re-released? Either way, I was a fan of Crash and other movies that follow in the same wake/idea as such. Count me in. (Will I see this? – yes)

Out of 16 trailers I think I want to actually see 4 of them and possibly a few others. Needless to say that not all movies are big money makers – but they all deserve a shot right?

What do you guys think about this week’s trailers? Any of them peak your interest? Sound off in the comments below. Yeah, I actually want to hear from you. Any trailers I might’ve missed? Take care and enjoy your movie filled weekend!

They say in making a movie or play, casting is 90% of the job. Having been in theatre on both sides of the stage for the majority of my life I can tell you…that number…

Never mind Batman.  Never mind Iron Man.  Never even mind Captain freaking America himself.  Spider-Man is always going to be the hero that I return to time and time again, regardless of how many times…

Scores of cult films are pleasing to watch for all the wrong reasons. Like so many reality TV producers have figured out, everyone loves witnessing a good train wreck. Whether because of a…

Who are the most famous gunslingers in pop culture history? A few may come to mind as soon as I said that, and you will likely find many of them below in Luke Butland‘s “Gunslinger”…

httpv://www.youtube.com/watch?v=zEhtsgu6bJg As big of a badass as he is, it’s an inescapable fact that if you’re watching something with Sean Bean in it, he’s probably going to die. I guess that can be considered a spoiler alert…