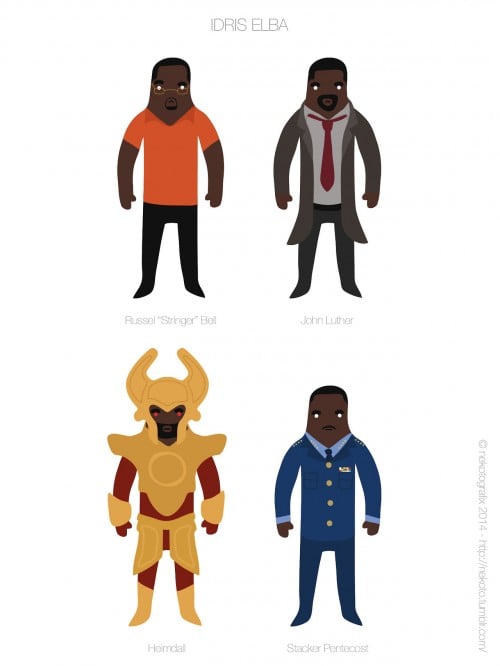 Even though Idris Elba didn’t win anything for his recent portrayal of Nelson Mandela, he’s had a hell of a year between that movie, Pacific Rim, Thor 2 and a new season of Luther. And obviously, before that, he was one of the quintessential characters on The Wire. Our own Jenni Wright explored that performance here.

This bit of art from Nekoto pays tribute to four of Elba’s most iconic roles, Mandela excluded. I guess the general who defeated the Kaiju is more important than that guy who defeated apartheid. To be fair, those Kaiju were pretty damn scary.

httpv://www.youtube.com/watch?v=yzPhpXLwL9Y Back in my day, Facebook didn’t even have a wall yet, so the main form of communication was through poking. No one was really sure what poking meant, but it was suspicious that hot…

As if Miley Cyrus being plastered all over my TV and internet wasn’t bad enough, now her trend of twerking has invaded the beloved Disney Princesses, and made me write a headline I never thought…

As a Downton Abbey reviewer, there’s been a Maggie Smith sized hole in my heart since the last episode.  Where was I supposed to go for the understated quip? Who was going to fend off…

The big news this week was the new Batman vs Superman: Dawn of Justice trailer: our first substantive look at DC’s followup to Man of Steel and that company’s answer to Captain America: Civil War.  Ever since…

Oh god yes. Frankly with the massive fan bases each have, I’m surprised this is the first time I’ve seen a Star Wars/Game of Thrones mash-up, but I’m sure it won’t be the last. From…