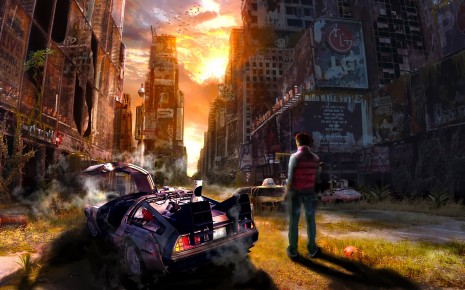 You’re kidding yourself if you think they’re not going to remake, sequelize or prequelize Back to the Future someday, as every franchise that was once popular is getting a resurgence in creatively bankrupt Hollywood in this day and age.

But what would such a film look like? Where would Marty travel to in a new film? One artist has an idea, and sends the time traveling lad to a dystopian future that looks like he’s about to meet Will Smith and his German Shepard.

The picture is actually a landscape originally drawn by Vladimir Manyuhina, and the DeLorean and McFly were added in later by an unknown party. Pretty cool.

So I was late for Harry Potter this weekend, and I missed every single preview, including the one for The Dark Knight Rises. I’m resisting hunting it down online because I would still like to…

Despite that fact that so much of film comes out of its scripts, its editors, and, of course, its actors, we still hold one position in the highest of cinematic esteems: the director. And within…

httpv://www.youtube.com/watch?v=yWpY9P9tzSw So this is one of the cooler videos I’ve seen in quite some time. It’s called Everything is a Remix, and it shows all the various films Quentin Tarantino drew on when filming Kill…

When you think of a bad movie poster do you relate it to a bad movie as well? More often than not a poster is so awful that it will prompt me to not even…

One of the lessons I took away from watching In A World…, the directorial debut of the supremely talented Lake Bell, is that stakes can be anything, as long as they matter.  Hell, there was…

Superhero movies are a dime a dozen these days, and despite a decade of their surging popularity, they don’t seem to be going anywhere any time soon. The truth is, after 80+ years of comics,…