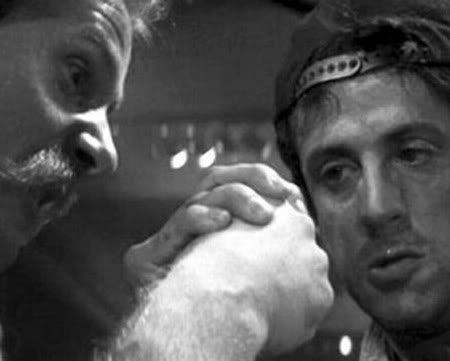 I’m not sure how I never mentioned this movie but boy was that a mistake.  When you’re talking cheesy 80s Sylvester Stallone movies Over The Top should definitely be a top five choice.   Here’s a quick little synopsis in case you haven’t seen the film.

Lincoln Hawk (Stallone) is a struggling trucker who’s trying to rebuild his life. After the death of his wife, he tries to make amends with his son who he left behind years earlier. Upon their first meeting, his son doesn’t think too highly of him until he enters the nation-wide arm wrestling competition in Las Vegas.

Ah and let’s not forget that his son was attending military school and is a complete brat.   And another thing.  His name is Lincoln Hawk!  I mean come on.  How awesome is that?  The movie is filled with ridiculous lines, scenes, and of course funny faces because of the arm wrestling.

Let’s just say you will be highly entertained as you might from seeing a cheesy Arnold Schwarzenegger film when Arnie was ginormous.  Anyway, the trailer is after the jump…..

Oh and I forgot a cheesy Kenny Loggins song is the theme song to this movie.

We’ve all been there: cruising the algorithm-based Netflix Watch Instantly page on any given evening, searching for something decent to watch. Let’s see, you’ve got your instant queue, filled with all the Fellini, Godard, and…

October means Halloween, and Halloween means horror, and horror? Well that means some damn good movies. I presume many of you are searching for a good horror flick to curl up with this month, and…

October 19, 2010 Tyler shut the door behind him as he entered his agent’s plush, cavernous office. Oversized movie posters adorned most of the room’s walls, trumpeting the success of his cinematic career. Tyler Perry’s…

httpv://www.youtube.com/watch?v=wMGxkb1uHPM This year, I was really looking forward to Lockout. Guy Pearce, sci-fi, what more could I ask for? But the reviews came in and told me to skip it, so I did, until this…

httpv://www.youtube.com/watch?v=MuZXoXKqtUk We’ve all been waiting a long time for this, and now the Green Lantern trailer has finally crashed landed on Earth. Watch it above if you haven’t already. I have to say, I’m really…

The term “dramady” has been around for a while now ever since Judd Apatow started injecting a bit of the “feels” into his slapstic R-rated comedies. Usually, they were just goofy with a heart, like…