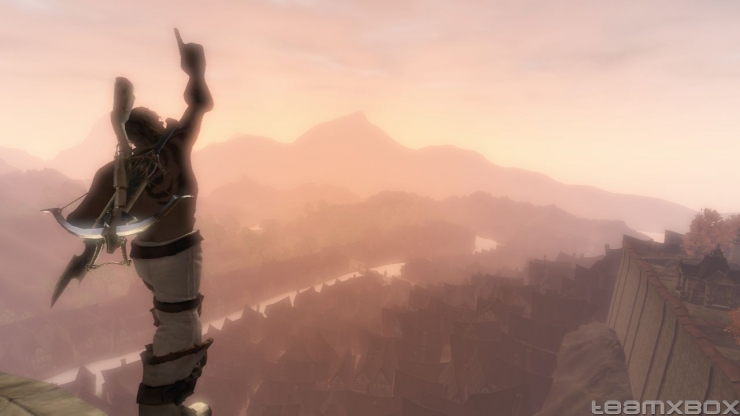 This week on Breaking Down the Best, I take on my own pick for game of the year, Fable II. Though I had a blast with it, I recognize that it does have deep, deep flaws, which I must pick out and ravage in hopes that Peter Molyneaux reads this blog and follows my every whim for part three. Most of these are relatively easy fixes, and I hope that they will be addressed in the inevitable sequel. 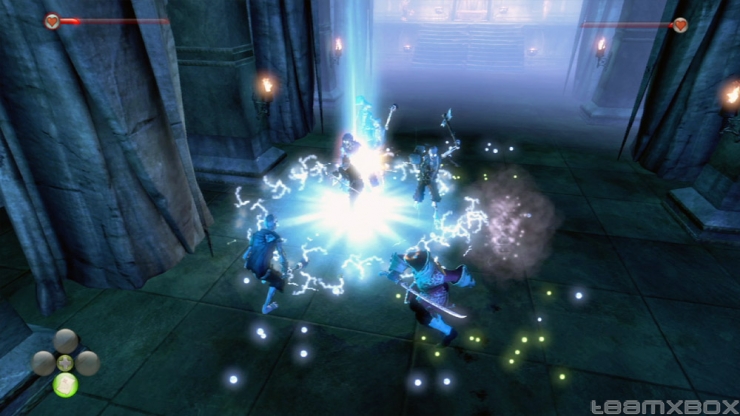 The only spell you’ll ever need to know.

The original Fable was probably one of the easiest games I’ve ever played. I danced through the game using only my sword and one spell that obliterated everything in sight. In Fable II, I also waltzed through the game the exact same way, only this time the game was much longer so it felt a great deal more fulfilling. But truth be told, I only died once the entire game, and that was just because I didn’t understand how to quickly use potions yet.

There are two issues that made the game insanely easy for me, and I’m assuming, a ton of other people. First is the Ghoul sword augment, which regains your life when you hack an enemy. But not a little life mind you, I’m talking a full bar in about five swings, which I’m surprised doesn’t have your enemies saying “oh come on!” out loud.

The second piece to the easy puzzle is the seemingly invincible lightning spell carried over from the first game. I charged it up, and upon release it instantly reigned death down on everything with in a five mile radius of me. Not only that, but as the enemies are standing paralyzed by the electricity, I hacked at them with my life-stealing sword. It was like an all you can eat buffet wherever I went.

Honestly, toning down these two abilities would make the game much more challenging. I didn’t even bother using any other spells, because well, why would I? And shooting? Please, I did it just because I got bored with endless amounts of shock and slash. 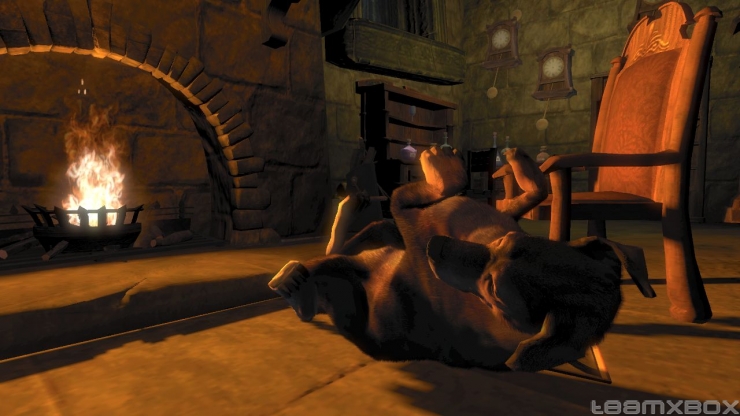 At least Chips loved me unconditionally.

I’m not going to lie, it’s kind of cool to make someone fall in love with you, propose, get married and buy a house, all of which happen in a game which is NOT The Sims or Second Life. But the problem with marriage is there is never a “why” to it. After the honeymoon is over, your wife becomes a nagging, sex-starved crazy woman who is constantly pleading with you to come home after every third monster you kill so you can buy her something or give her a roll in the hay. And if you blow her off too often? A divorce and 50 evil points were waiting for you.

The experience with my marriage was so bad, I was turned off from the prospect of having children. I could deal with having my wife hate me, but my kid yelling at me every time I came home until I handed her a doll? No thanks. This game already puts the guilt trip on me every time I eat a steak, and I can only handle so much scorn. The easy fix to this is simply to extend the amount of time it takes for your family to get super pissed that you’re not visiting. And also, having them show up with unique items every so often would go a long way as well. 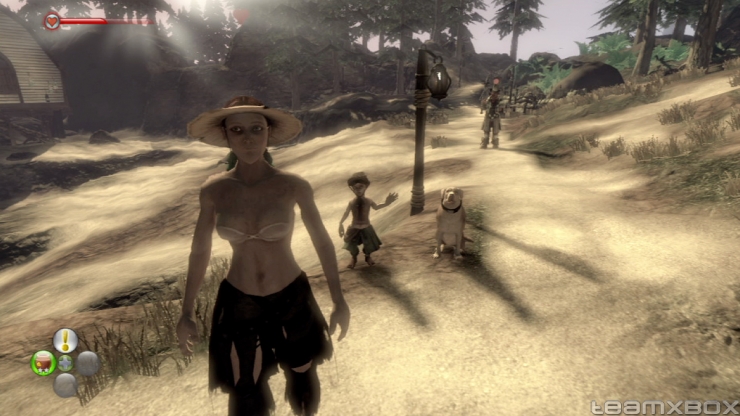 Where’s the “take your top off” expression?

I know there are limits when your hero can’t utter a word, but you know what, maybe that should be changed. I’m growing tired of games being too lazy to record voices for their protagonists, and ever since two years ago I hold all games up to the Mass Effect standard of social interaction. But Fable II is barely a step above The Sims inaudible squawking. Please tell me how it makes sense to kill half the guards in a city, then cheer all the townspeople up by holding a fart for ten seconds?

Fable II claims to be all about “choices,” but besides a few scripted choices that effect the broad landscape of the land, in the micro realm it’s far to easy to manipulate anyone into loving or hating you. How about a few NPCs you can actually identify with? Maybe the ability to pursue a girl who doesn’t look like a clone of every other girl in the city? It’s far too shallow a system now, and needs an overhaul to give the game a new layer of depth. 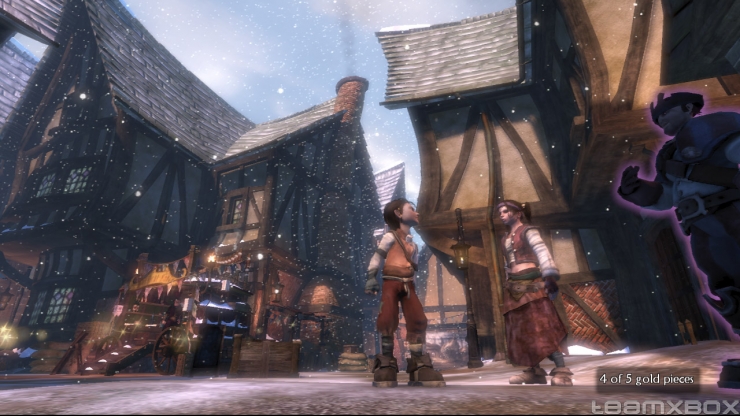 This is a mixed bag for me, because I love the jobs system to earn money to buy things, and I love how real estate gives you a constant cash flow once you start buying up all the property you can see. However, there is a point when you’ve bought about half the buildings in the world where the amount of money that starts coming in is just absurd. I was making $10,000 every five minutes for doing nothing, and once I bought everything everywhere, I had nothing to do with my piles of gold but bathe in it.

What’s even worse is that even when the game is off, this interest is still accumulating. Sounds like cool concept at first, very Animal Crossing and all that, but really, it only ramps up the game’s ease factor. After I beat the game, I turned it off for a week and when I rebooted I had a cool million in the bank, with unfortunately nothing left in the world to buy.

I think the solution to this is to either severely extend the length of real estate payments, or make a series of items or buildings that are so insanely expensive, you will have to save up for a month to buy them. But releasing a DLC well after the game is out that offers players an “evil” bribe of $10,000? I could make that much playing fetch with my dog for the next two minutes. 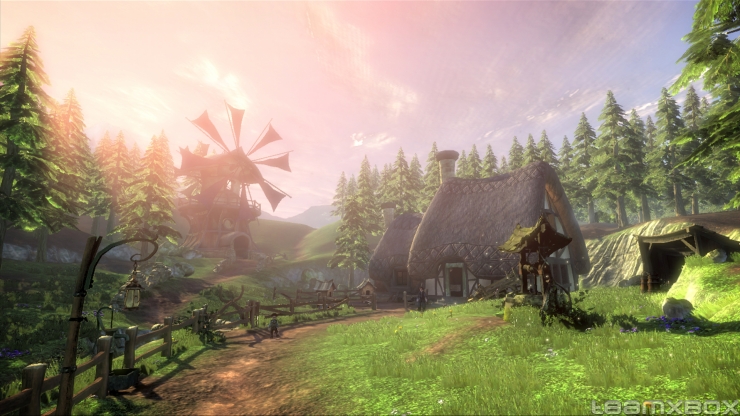 What, you were expecting a final dungeon with less sunshine?

There has been a lot of bitching and moaning about the end of Fable II, and rightly so. There is no final boss battle, not only that, but in the end scene, unless you know better, YOU’RE not even the one who exacts your revenge, something you’ve spent that last 20 odd hours plotting. Instead it’s co-opted by the most annoying NPC in the game, which makes for the cheapest of cheapest laughs, but mostly a whole lot of anger.

And killing the dog was a really lame move. You’ve grown so attached to the damn thing, of COURSE you’re going to pick that option, not to mention, there are a ton of important items you literally cannot find without his help.

I really liked the sublime death level, where you revert to childhood and have to figure out a way back to the real world, but that should have been followed by an actual end level and an actual boss battle. Something hard. Something epic that would make me try and beat it more than one time.

But for all its flaws, Fable II did do one thing right with the ending. It lets you keep playing after it’s over.