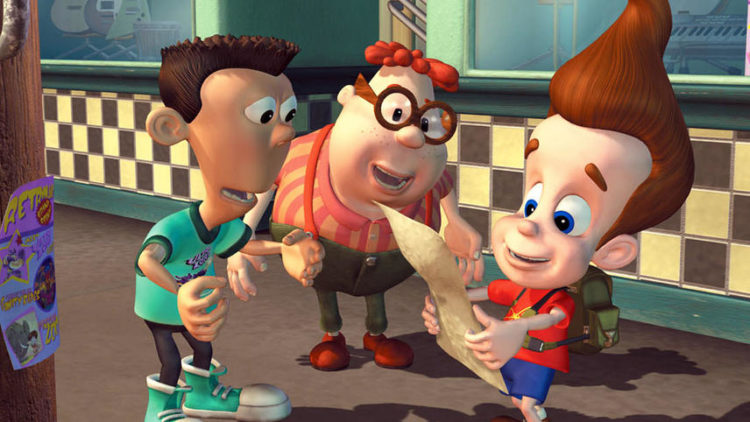 Jimmy Neutron refers a franchise started up by a computer-animated movie called Jimmy Neutron: Boy Genius in 2001, which was made by Nickelodeon Pictures in collaboration with a couple of other companies. In short, the movie was centered on the titular character, a schoolboy super-genius who had to take on a race of hostile aliens called the Yolkians. Due to an excellent marketing campaign as well as a number of other factors, Jimmy Neutron: Boy Genius proved to be a success with more than $100 million at the box office, which was in addition to it being the first animated movie from Nickelodeon Pictures to be nominated for the Oscar for Best Animated Feature until Rango came along in 2011.

As a result, it was natural for there to be further interest in the Jimmy Neutron franchise. However, it is interesting to note that Nickelodeon had already shown a strong interest in making both a movie and a TV show, with the movie having been made first so that the movie-quality assets could be reused for the TV show. Since Jimmy Neutron: Boy Genius was a success, it ensured the existence of its intended follow-up The Adventures of Jimmy Neutron: Boy Genius, which started up in July of 2002 and would continue until November of 2006.

For the most part, the TV show was received well enough. For proof, look no further than the sheer amount of Jimmy Neutron products that have been released, with examples ranging from specials to a surprising number of video games. Unfortunately, while work had started up on a fourth season of the TV show, said work was interrupted by the box office failure of The Ant Bully, which caused the collapse of the animation studio. Without the animation studio, The Adventures of Jimmy Neutron: Boy Genius couldn’t continue, which is why the main part of the Jimmy Neutron franchise came to a very sudden stop.

Is There a Chance for a Jimmy Neutron Reboot?

Some people might be curious if there is potential for a Jimmy Neutron reboot. If so, the answer is a qualified “Yes.” In short, it seems that the decision-makers at Nickelodeon still saw some potential in the Jimmy Neutron franchise as late as 2010, which saw the release of a spinoff called Planet Sheen. However, said spinoff met with a less than enthusiastic response, thus resulting in its cancellation following a single season because of a lack of numbers to sustain it. Besides this, the director of Jimmy Neutron: Boy Genius has stated in 2016 that he has a plan in mind for a reboot movie, but that he is waiting for the right time to move forward on it. Summed up, while the prospects for a Jimmy Neutron aren’t particularly great, past occurrences suggest that it isn’t wholly impossible at this point in time. For a lot of people, that should be more than sufficient cause for hope.

Is Now a Good Time for a Jimmy Neutron Reboot?

As for whether now is a good time for a Jimmy Neutron reboot or not, well, there are some reasons to think that it might be. For instance, a lot of the people who grew up watching Jimmy Neutron are now adults, which in turn, means a potential market that could be tapped into by playing into their sense of nostalgia. This is particularly true because animated works that appeal to both kids and older audiences have become more and more common in the North American market in modern times, thus making it easier to aim at said individuals without sacrificing the kids’ market altogether.

Meanwhile, the content of the Jimmy Neutron franchise isn’t a bad fit either. Certainly, the evidence suggests that there is an appetite for adventure mixed with soft science fiction shenanigans, particularly when comedy is liberally tossed into the mix as well. Moreover, the basic premise of the franchise is flexible enough to accommodate some adjustments to make it more compatible with modern tastes without tossing out core concepts. Something that should be that much easier with a reboot rather than a continuation. Of course, none of this is meaningful unless whoever takes charge of a Jimmy Neutron reboot can pull off the execution, though to be perfectly fair, that is true for all of the old franchises that are being rebooted left, right, and center.