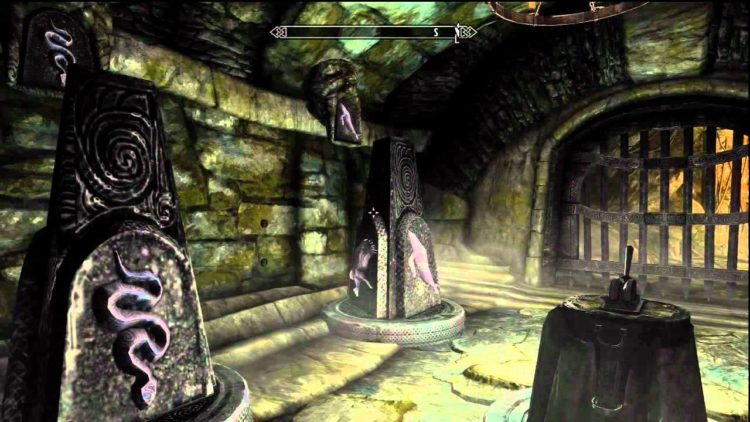 Skyrim is full of visually stunning and completely unique environments with challenging puzzles, but sometimes you just can’t seem to crack the code. The Saarthal Puzzle is one of those infuriating enigmas. Fortunately, you won’t have to go it alone. We’ll explain everything you need to know about Saarthal and the Saarthal puzzle so you’ll have no trouble getting through it. Better still, we’ll tell you exactly how to solve the Saarthal puzzle in Skyrim.

Saarthal is an ancient city, far older than most payers realize. The history of Tamriel is divided into six distinct eras known as the Dawn Era, the Merethic Era, the First Era, the Second Era, the Third Era, and the Fourth Era. The Dawn era is known chiefly through legends and myths from various cultures worldwide. The Merethic era is the earliest recorded history of Tamriel. The Atmorans and Aldmer came to the world, which already had primitive humans. However, these humans didn’t even possess a written language until the end of this early era. The Merethic is also sometimes called the Mythic era. According to The Unofficial Elder Scrolls Pages, “Saarthal was the first city built in Skyrim after the arrival of Nords from Atmora sometime in the middle of the Merethic Era… In the late Second Era, the ruins of the city were located by archaeologists near the modern city of Winterhold.” During the First Era, much of the early history of Tamriel was first written down and recorded. The Nords of that time were very warlike and conquered vast swathes of territory. They also founded great cities, and Saarthal was the Nordic capital, so it’s no surprise that this incredibly ancient place has a few hidden secrets. The Saarthal Puzzle is one of these mysteries.

How To Solve The Saarthal Puzzle

The Saarthal puzzle doesn’t have a single location because there are two puzzles to solve in different areas. However, finding them is inevitable since you can’t leave without solving both. The Saarthal puzzles both involve images on stone, but the solutions are very different. We’ll walk you through both below. To get to the Saarthal Puzzle, you need to join the College of WInterhold. It won’t take very long before you can start Under Saarthal, which is the second quest in the College of Winterhold questline. Once you have this quest, the puzzles are a part of the route, and you can’t miss them because you cannot leave without solving them. Reaching the puzzle isn’t as challenging as getting out again. As Wiki’s Elder Scrolls Fandom Page explains, you will “Help a fellow College of Winterhold scholar, Arniel Gane, to retrieve four enchanted artifacts from various locations in the ruins… the Saarthal Amulet is discovered. When the amulet is worn and a spell is cast towards the door, it opens to a burial chamber… If the location is visited before “Under Saarthal,” the door to the inner rooms remains locked.” Pro Tip: On this academic quest, you will be asked to find four items. Three are rings that are very small and can be tricky to find. However, if you get the rings first and save the Amulet of Saarthal for last, they will stay marked on the map, but once you acquire the amulet, the locations will disappear.

The first pillar puzzle is the easy one. After retrieving the amulet of Saarthal, you will have a battle and eventually pass into Saarthal proper. After a series of traps and a battle with three Draugr, there will be a door on the second floor near a broken coffin. This is where the first pillar puzzle is found. There are six movable pillars. Each pillar has symbols on it, and you can spin them all you like, but to find the correct position for each one, you need to get close. Look above and behind the pillars. The right symbol is on the wall. Each symbol should be facing the hallway where you’re standing, but once you have all six, you can activate the lever and move on. Pro Tip: Khajiit’s innate night vision spell will reveal the solution easily. If you aren’t playing a Khajiit, use Night Eye or Candlelight for a better view.

After you solve the first puzzle, the next room has a pair of ramps and a Draugr Deathlord, Wight, or Scourge at the top. If you can sneak or a good invisibility potion, you may want to use it to avoid this confrontation. Beyond the Draugr is some loot and an iron door with two rune traps. If you set off either trap, it will call the Draugr, and you’ll have to fight anyway. Walk around the first one and jump over the second to move on to the second Saarthal Pillar Puzzle. You can also move these pillars, but turning any of them will cause others to turn as well.

The Order For Moving The Pillars:

Pro Tip: Get ready. After you finish this puzzle, you are headed into the final battle for this quest, where you will fight the draugr-shape of Jyrik Gauldurson.

The Prize For Finishing Under Saarthal

Once you’ve finished battling and problem-solving your way through Saarthal there’s one thing left to do. You’ll need to head back to the college and locate Arch-Mage Savos Aren. Inform him of your discovery to get the Staff of Magelight. In addition to any other treasure you picked up along the way, the Staff of Magelight is a useful piece of gear. It equips in a hand slot and produces a ball of light lasting for one minute. The ball will stick to whatever it strikes. The only other way to get this staff normally is from the Blue Palace. There is one located in a large vase behind Elisif The Fair’s throne. Alternately, if you have the Dragonborn DLC you can create the Staff of Magelight staff by using the Staff Enchanter. However, Under Saarthal is still the best way to get it.