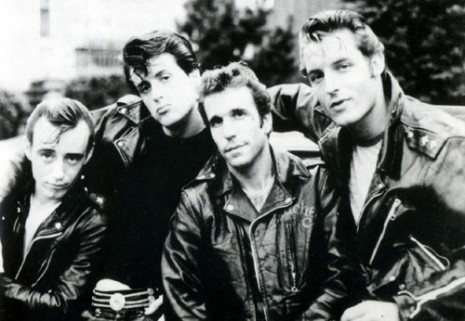 I honestly picked this movie because there are few movies that Sylvester Stallone has done that people haven’t really heard of.   The Lords of Flatbush is one of them.   Here’s a synopsis written by Paul Brenner.

“This low-budget independent film by novice directors Stephen F. Verona and Martin Davidson is a slice-of-life elegy from the leather-jacket, bobby-soxer era of 1957, set in a Brooklyn high school. The film stands out for the appearance of up-and-coming actors (circa 1974) Sylvester Stallone, Henry Winkler, and Perry King (even Armand Assante has a bit role). Stallone, Winkler, King, and Paul Mace are members of a local neighbor social club called “The Lords of Flatbush,” and they spend their time exercising their hormones, hot-wiring a car, playing pool, and quaffing egg creams at the local candy store.

The film finally focuses its interest on two of the “lords.” Chico (Perry King), owns a motorcycle and wheels over to see Jane Bradshaw (Susan Blakely), the daughter of an army colonel who, despite Chico’s motorcycle, gives him the brush-off. Then there is the muscle-headed Stanley Rosiello (Sylvester Stallone), who, like Marlon Brando in On the Waterfront, loves pigeons.

He also loves Frannie (Maria Smith), with whom he has bedded down under the boardwalk one too many times, and now finds that she is pregnant and wants to get married. Skirting along the edges of the frame are Butchey Weinstein (Henry Winkler) and Wimpy Murgalo (Paul Mace), who, as second bananas, go along with Chico and Stanley as they adjust their testosterone to adult living.”

Check out the trailer after the jump

Let’s talk a little about fan clubs for a minute.  Understandable when it’s for children.  A little creepy when you have people in their 20s, 30s and beyond organizing these things.  Hell, I might be…

Ever wonder what it could be like if you were hanging out in Cairo and you saw Spider-Man just hanging out on the bus?  Well, that’s what  Hossam Atef, a young photographer with a nice…

There are those people out there that many would consider to be “thrill seekers.”   Usually when we think of these people they are the types that might swim with sharks in a cage or go…

“Only room for one over-powered blue villain in this toy box!” I’m currently home for Thanksgiving, and in an effort to clean out the house, my mom is having me go through some of my…

If there’s one thing I can appreciate from a movie it’s a cool vehicle.   Like any other prop it can serve as a meaningful extension of a character.   In some cases though it can unfortunately…