Congratulations, fellow survivors! We made it through the latest apocalypse. I can’t say I’m all that surprised, of course; according to Wikipedia, I’ve endured no less than 40 apocalypses (apocalypsi?) since the day I was born. Now, I’m always skeptical when I hear whispers of yet another end-of-the-world scenario, but all that Mayan nonsense must have gotten to my subconscious lately, because I had the following Unreality-esque dream last week:

In my dream, the world was coming to an end due to some vague, meteor-based catastrophe, and the government was shuttling citizens out to space before the Earth was destroyed. (The escape pods looked sort of like futuristic fireflies as they jettisoned off in the background.) I was supposed to be on one of those shuttles, but stayed behind with my friends and family instead. Then I saw the meteor land far in the distance, and the mushroom cloud slowly rising up to meet us. The end was coming, and there was nothing left to do but watch as everything around me was enveloped by a warm, peaceful, otherworldly glow…

And what was I saying about cosmic collisions? Melancholia had one of those…

So yeah, these scenes might be responsible for some of that visceral imagery. And I’m no psychiatrist, but I’m pretty sure my brain somehow crammed plot points from all three movies into one semi-coherent narrative. It’s no Breaking Bad finale, but still.

Segue time: I feel I was inaccurately represented in my dream. Meteor strikes aside, I have tremendous confidence in my post-apocalyptic survival skills. If you find yourself in the middle of an alien invasion or zombie attack, the fact of the matter is this: I’m probably going to outlast you. I know, I know, this might sound a bit arrogant, but I’ve got all the training I need to survive certain versions of Judgment Day (at least for a little while). When the end comes, I’ll be the guy standing on top of a burning tractor with a machete in hand, waving everyone else goodbye. Here’s why: 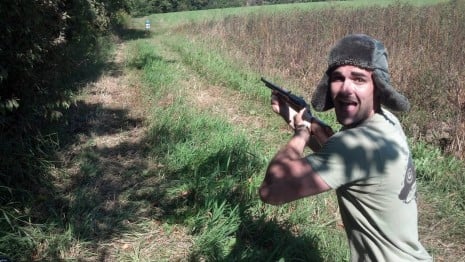 No joke, that’s me in a hayfield with a rifle. So obviously I can do gun stuff. Know what else I learned growing up on the Fink Farm? How to wield an axe. Start a fire. Drive a tractor. Operate gas-powered machinery. Clean up animal poop. Identify poison ivy. Butcher poultry. Cut my own hair. Grunt with authority. Fortify my immune system. Ride a bike. Use a chainsaw. Bandage wounds. Build stuff with wood. Run from animals that have horns. “Take it like a man.” Repair fences. Tie knots. The list goes on. Any character in The Hunger Games would thank their lucky stars to have these skills. That goes double for anyone in The Road. The Book of Eli, too, probably.

2)  I already know how to blend in with zombies 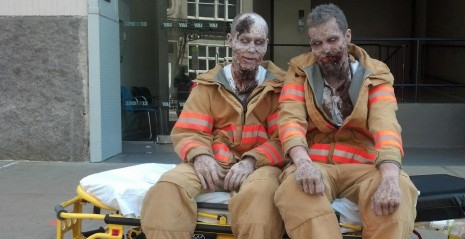 The number-one rule in any post-apocalyptic scenario is “know your enemy,” and if those enemies end up being zombies, I’ve got that shit covered; I know how they move, how they growl, how they grimace at small children. In fact, my zombie-ing knowledge landed me a part in this Walking Dead promotion last summer (I’m the taller paramedic at 0:21):

But my Year of the Undead wasn’t over yet. In October, I was zombified again for Bumbloods, a sweet miniseries that chronicles the misadventures of two dudes who clearly didn’t grow up on farms. 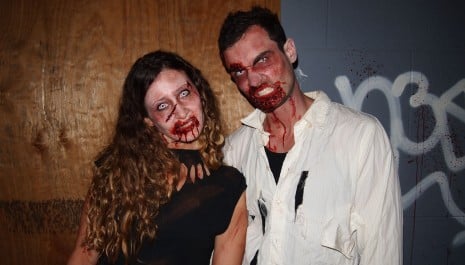 Nothing groundbreaking here. When attempting survival in a world that has fallen apart, you’re always going to be on the move. When you’re always on the move, your shoes will eventually wear out. When your shoes eventually wear out, you’ll need to replace them, and time wasted finding shoes that fit is time wasted not using those shoes to run away from whatever the hell’s chasing you. 10.5 is just a nice, average, easy size to find, is all. Heck, 10’ll do in a pinch.

They say the greatest evolutionary trait that humans picked up was the ability to adapt. There’s a reason we live in Siberia and Hawaii. Humanity can catch curve balls unlike any other animal. It’s pretty…

Tomorrow night is my favorite holiday, and very likely yours if you’re here. Most of the public may prefer Christmas for its crass commercialism and stable of timeless classic films and television specials or Thanksgiving… 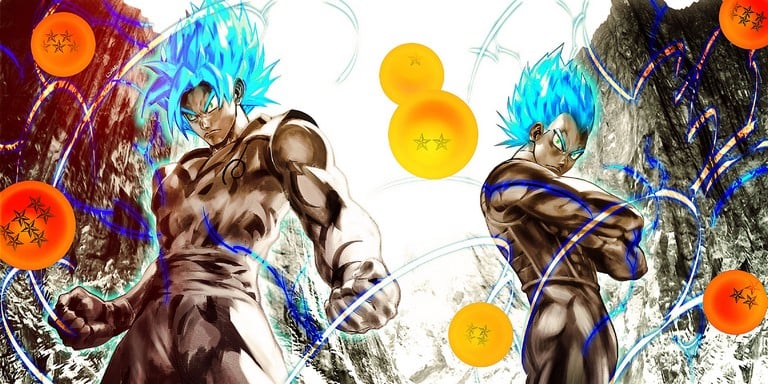 There’s always a time and place for a photoshop fail.  Those times and places are usually reserved for sites like this one.  We love to poke fun at people who clearly don’t know how to…

Life uhhhhh…..finds a way. Via

httpv://www.youtube.com/watch?v=Ca3Y8Ws3plI You know how Halo has had live-action commercial for the past few games that everyone ooos and ahhhs over? Well, they thought it would be a good idea to spend a relative ass-ton of…