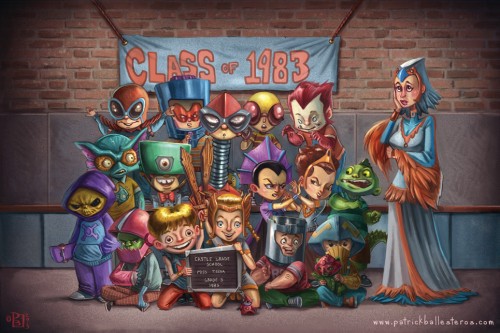 Before they were at each other’s throats, firmly classified as heroes and villains, the cast of Masters of the Universe all went to kindergarten together, at least according to artist Patrick Ballestros.

Well I mean, I’m pretty sure the kid with a skull for a head really didn’t have all that much choice in growing up to become evil. That’s a path you really can’t alter with a face like that. Though people have told me I have villainous eyebrows, so I don’t know.

Unless it’s the Big Game (I’m pretty sure I’m not allowed to use the words “super” and “bowl” together on a dot com in reference to that football game to end all football games), we…

httpv://www.youtube.com/watch?v=pE12H1HorUU We spend a lot of time talking about shows like Dexter and The Walking Dead these days, but as those shows start to wrap up for the year, we must remember our ultimate geek…

If there’s one thing I hate, it’s finding a spider in the bathtub.  Ewww.  If there are two things I hate, then the second one is a story that doesn’t have a good ending.  You…

(click to enlarge) I’m sort of in love with this Disney version of Firefly, like that’s any surprise. Artist Stephen Byrne has transformed the series into animated form, with nary a princess to be found….

It’s a rare thing for a creator to revisit and expand upon their existing work. We’re accustomed to the slew of modern remakes and reboots of cult films by now, but to have a director…

Another day, another rather hilarious re-editing of a popular show. I’ve seen Breaking Bad get a sitcom intro before, but now it’s been recut as a scene you might find in a show like Seinfeld….