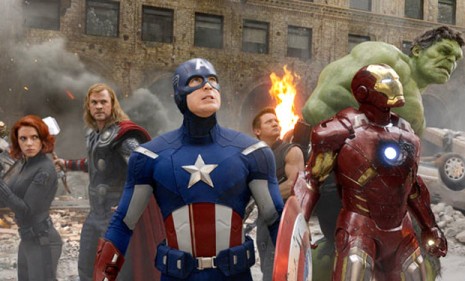 I’ve watched every Marvel film that has been released and had an enjoyable viewing experience throughout most of them. There is action, romance, some laughs, more often than not a betrayal of someone trusted by the hero, but the hero still manages to save the day. They all follow this standard format and that wouldn’t really be a problem if Marvel weren’t releasing two films a year. I used to watch the releases opening night but now I wait months with ease, sometimes I don’t even realize I haven’t watched it. I only recently watched Guardians of the Galaxy and it was a good film but I didn’t feel like I missed out on much by not having watched it earlier because it followed a storyline I was expecting.  Frankly it was the same as all other Marvel films.

Marvel is making bank so clearly the format is working for them right now but if they are hoping to release multiple pictures a year until the end of time then maybe they should change it up a little bit?  When watching a film I like to be on the edge of my seat, I want real shocks and by that I don’t mean the scenes they have after the credits, it’s been a while since they were a surprise. They should take risks with their films and actually stick by them, in my opinion some of the highlights of the films have been the supposed deaths of Agent Coulson, Loki and Nick Fury, watching their demises made me sit in awe for a bit. But then they were swiftly resurrected. The characters are fan favorites, and killing them off would probably annoy a truck load of people but it would also show that Marvel have balls, no one is safe in their Universe and could you imagine the repercussions of their deaths? We see it to some extent in The Avengers with Coulson, Captain America: The Winter Soldier with Fury and Thor: The Dark World with Loki but before we know it they are alive again, I wish the franchise would ride it out and see where the grief takes the other characters. Granted, Thor still thinks Loki is dead so that could possibly go somewhere.

The formulaic storytelling wouldn’t bother me so much if Marvel were willing to evolve in any other way, like stylistically, but the situation with Edgar Wrights Ant-Man shows that they are clearly not. Edgar Wright isn’t just a director for hire he is more of an auteur and does things his own way which lead to his films being ‘Edgar Wright films’, but Marvel wasn’t willing to let that happen, they weren’t willing to experiment when they already have a format that was successful. Maybe now that we are coming up to the end of original franchise actors’ contracts and we’re entering Phase 3 there’ll be a change, perhaps they’ll actual decide to kill off characters rather than retire them. Then again looking at how they renegotiated Robert Downey Jr.’s contract so he’d stay with them longer it looks quite doubtful. Like I said I do enjoy watching the films but I’m finding myself more of a passive viewer rather than a fan, I worry that one day I’ll just decide to give up on watching them all together. Anyone else agree or am I alone in this?

What’s better than good photoshop? Bad photoshop, and Paloma Nevada has delivered that in spades with her Disney/Game of Thrones mash-ups seen here. She’s taken characters from the show an inserted them into Disney movies…

I like biopics. I really do. I know they dramatize the elements of someone’s life, but I also find the stories (and even the skeletons of their stories) to be quite inspiring. Even if the…

When I read Paul’s review of Clash of the Titans yesterday, I wasn’t the least bit surprised to see that he thought – along with countless others –  that the movie was terrible.  Nowadays, my…

(click to enlarge) There’s a reason I’m posting this as the last official article of the week, because it’s probably going to take you all weekend (and then some) to figure it out. Primer is…

Let me start off by saying that I’m Jewish so my Christmas consists of eating Chinese Food and watching movies all day.  Now I’m not sure what all you Christians out there do but I’m…