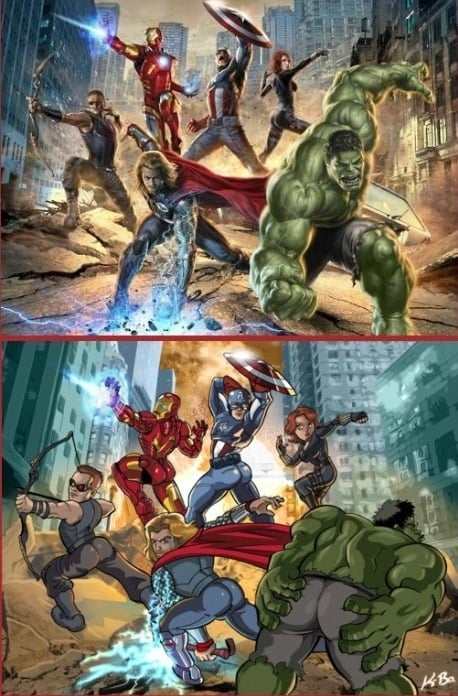 To say there’s a bit of a disparity between how men and women are sexually portrayed in comic books is a bit of a understatement, but now the trend has translated into their movies as well.

We’re all excited for The Avengers, but while the above promo poster shows the manly heroes in various heroic poses, Scarlett Johansson’s Black Widow is somehow twisted to perfectly show both her ass AND boobs in one contorted pose.

Below that, artist Kevin Bolk has imagined what it might look like if male heroes were forced to contort in such awkward ways, and result is undeniably hilarious.

Let’s face it folks.  He’s mean.  He’s weird.  He’s obnoxious.  He has a bigger ego than just about anyone in Hollywood.  But you can’t deny that Quentin Tarantino isn’t pretty awesome. And just as he…

There may come a time in the not-too distant future when man will be tested – when all of their mettle will be put on the line in the ultimate battle for survival.  Sometimes it…

(click to enlarge) I’m not sure what exactly this photo was taken for, presumably some magazine shoot, but I do know that it’s awesome, and I now want to try it. Wearing disposable clothes of…

I haven’t seen Superman Returns returns in probably over a couple of years, so my reason for writing this article is somewhat tangential.  I know that the consensus with regard to Bryan Singer’s Superman…

httpv://www.youtube.com/watch?v=GR3ywoc2Cp4 Alright, so what you’re about to witness is an interactive YouTube game that has the Joker dance battling Batman for Gothan street cred. You pick your dancer, and then must correctly match the other’s…

by Lucas Tetrault Does anyone else think that this generation and the generations to follow are getting cut short of awesome afternoon cartoons? What do they watch when they get home from school now-a-days…garbage called…