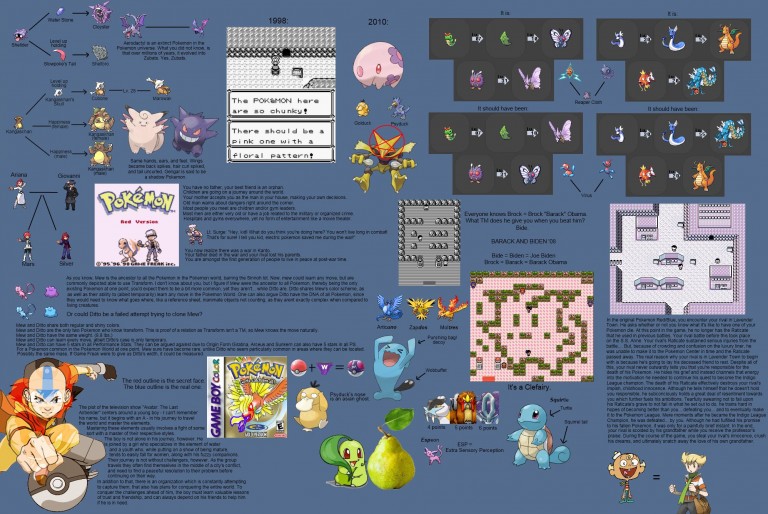 Are you a Pokemon facts junkie?  You’re not alone.  Over the years, the internet has taken it upon itself to explore Pokemon to such a degree that things have been uncovered about the series that even the creators probably didn’t intend. I’ve featured a few of them on the site here before, but this image shows all of the “obvious” Pokemon facts plus a bunch of new ones that you can read and have your mind explode.

My favorites are still “You killed Gary’s Raticate and are the villain of the story” and “Pokemon is a result of a post-nuclear devastated Japan where all the male adults are dead (unless they’re soldiers or criminals) and the animals have mutated.”  But that’s just the tip of the iceberg, and you can check out the full investigative report above.  Just make sure you click on the picture to enlarge it.

You know what really surprises me?  Considering the success of the show “Dancing with the Stars,” why haven’t the networks created more “with the stars” type shows?  I mean Biggest Loser has a franchise and…

With the introduction of technology, the workplace has changed considerably over the last 50 years. Offices have so many new pieces of equipment to make life easier and increase efficiency that it seems that it…

Dungeons & Dragons has been around for more than four decades. As a result, it should come as no surprise to learn that a lot of memes have sprung up around it, particularly since D&D…

Artist Andy McDonald decided to put basketballs in the hands of a select number of 80s cartoon villains.  Why did Andy do this?  We have absolutely no idea.  But like many of these amazing gems…

The first thing I thought of when I saw this picture was remaking the NES Classic “Paperboy” and putting it on like a PS3 or something.   One of the enemies you run into is the…