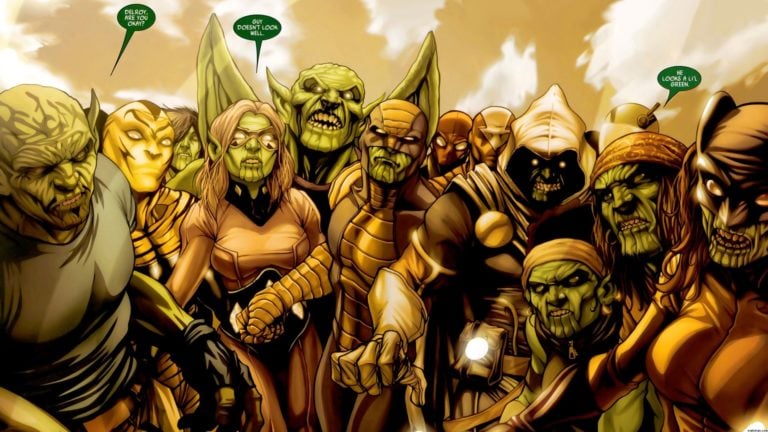 The Skrulls is a series that has generated a lot of excitement and mayhem, which fans dearly love. In case you haven’t tuned in yet, it’s an animated series that had its beginning in “The Fantastic Four” comics as a collection of space lizards with the ability to shape shift. They came to earth from a large empire deep in the galaxy. They constantly fight their sworn enemies, the Kree. Their modus operendum is infiltration and using subterfuge, and they are secretly trying to take over the earth. We’ve unearthed some interesting facts about the Krulls that viewers probably didn’t know.

1. The Skrulls were first introduced in 1962

This is probably news to fans who believe them to be a more recent creation, but Stan Lee and Jack Kirby first created them for “The Fantastic Four” comic #2. They had a different form back then and looked more like small goblins from outer space.

2. The original Skrulls existed in the form of three races

The Skrulls are ancient in their origins. The came from the Celestials who were keen on experimenting with genetics. They created three separate races of humanoids who were green in color and had lizard genes to boot. The three classes of Skrulls are Deviant Skrulls (shape-shifters); Eternal Skrulls (immortal) and Baseline Skrulls(capacity to evolve into Celestial beings).

We know that the Skrulls are in an all out war with the Kree, but the reason why hasn’t been made clear. While exploring the universe and seeking civilizations to trade with, the Skrull came across the Kree who were barbarians from the planet Halda. The war mongering Kree were in competition with the Coati, also native to their planet and in order to prevent them from moving ahead with Skrull space travel technology, they killed the Coati delegates. While they were at it, some Skrulls were killed too. They stole the space technology of the Skrulls and used it to become a force in the galaxy with evil intents. This is what sparked the Kree-Skrull War.

4. Marvel and Fox both have rights to Skrull movies

The Skrull are a popular race that has appeared in multiple Marvel comic books throughout the years. In addition, they’ve been in “Fantastic Four” cartoons so they’ve run the gamut in comics and television. Any Skrull films are the property of 20th Century Fox and Marvel Studios in a situation of co-ownership. Does this mean that we may be seeing a movie in the near future? The speculation is that it will probably happen at some point.

5. The Super Skrull is their hero

Many of you may not remember when the Super Skrull tried to beat the Fantastic Four. It was a long time ago, but this super popular warrior of the Skrull race is the equivalent of their super hero. He attempted to use brute force, but when he failed, the Skrulls reorganized and decide that a softer approach may be more effective. The Super Skrull takes on the character of both superhero and villain. It’s not easy to figure out which he really is, but through the decades, he has managed to get himself crowed as the emperor of the Skrull empire.

6. There are mutant Skrulls

Although it may sound odd, the Skrulls consider themselves to be a race with distinct features and characteristics. The Skrulls have also had the misfortune of accidental mutations within their race as well. A governmentally imposed program led to a large number of mutant births within the Skrulls. As in most societies, the mutants were shunned by non-mutants and hunted down. These are the Skrulls that sought the help of Charles Xavier for assistance.

7. Johnny Storm fell in love with a Skrull

This happened back in 1962. Johnny Storm, also known as the human torch, became involved with a lady named Alicia. The two are married despite the initial objections of Benn Grimm. A Skrull spy called Lyja takes Alicia’s place while Johnny’s wife is placed in captivity. Upon The Thing’s persistence, she admits that she is not Alicia, and helps Johnny and his superhero cohorts rescue Alicia. The problem with a happy ending is that Lyja is pregnant with Johnny’s child. Upon finding out, they grow closer until Johnny discovers that it was a lie and she is really carrying a Skrull bio weapon. She continues to stalk Storm as a shape shifter.

8. Vampires exist in the Skrull Empire

Skrulls also have their own version of our horror creatures. The Skrulls fear the Dire Wraiths in the same way that we do vampires and demons. Dire Wraiths are also capable of shape shifting, but their appearance is far more frightening and dastardly. They have long talens with hollow tongues that they use to penetrate skulls and suck the brains out of their victims. By doing so, they gain complete access to all of the memories of their victims. These beings were originally Skrulls that studied Black Magic and they evolved over time.

This is another thing that you probably didn’t know about the Skrulls. They’re hooked on old gangster movies. They prefer those that are set in the 1930s and feature lots of machine guns.

10. They posed as the musical group The Beatles

Most people don’t know that there was a group of Skrull agents that were sent into the UK on a secret mission. This happened in 1963. They took the form of the then popular rock band, The Beatles. At the time they were attempting to prevent the invasion of Earth by Martian hostiles.