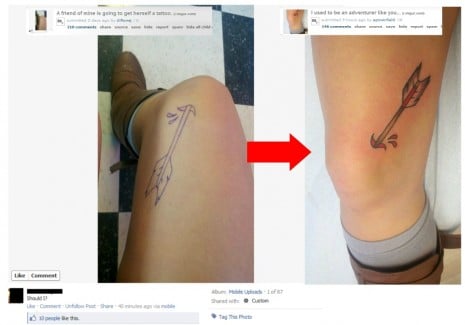 There are a lot of funny moments found within 200 hours or so of Skyrim, and I’m not sure why it is that the guard who says, “I used to be an adventurer, but then I took an arrow to the knee” is the one people walked away with.

Somehow it became an internet sensation, and then morphed into a plague, populating top YouTube comments and Facebook statuses everywhere, even by people who had no idea what a “Skyrim” was.

And now the joke is officially dead as someone has gotten it tattooed on their body as seen above. When a meme gets a tattoo or an awful parody video, you know it’s over. This one now has both.

We’ve featured some amazing Miranda Lawson and Jack costumes from Mass Effect 2, and I wondered who was going to be next. As it turns out, it’s someone just as sexy as those two, Garrus…

Alright, between this and Disney Sloth Princesses, it’s turning out to be a very strange day here, but I suppose our site IS called “Unreality.” To continue the idea that I’m trapped in a very…

Since there’s really nothing else to say to top that excellent caption, I’m going to use this space to share the news that there’s a new patch for Diablo II that was just released that…

I hate smoking, and therefore have an uncontrollable prejudice against smokers (you make my air smell bad and increase my health care costs), but I can’t deny that this video game inspired cigarette is a little bit…

You know, I fully understand honoring your favorite video game of all time with a spot on your body. I especially understand when it’s Zelda. I have a good friend who has actually done just…