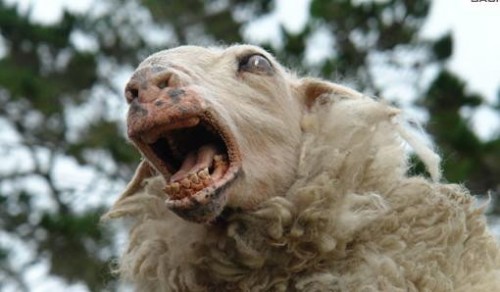 I loved dogs most of my life, until a pit bull locked his jaws on my hand and started dragging me into a corner to eat me. That sort of shifted my feelings about dogs, which is a shame, because they are wonderful creatures. Cujo didn’t help that fear, either. Yet, here I am, years later, ghost writing cute articles about dogs, knowing that fear was irrational. Yet anytime I see the movie Cujo, I whimper slightly. Because animals, even the cutest, sweetest ones, are still animals. Most are stronger than us and have really sharp teeth. A good horror movie producer knows this, and for that reason, we get animal based horror films regularly.

The problem is that there’s a very fine line when it comes to killer animal movies. On one hand, you have movies like Jaws and Cujo, that forever shift the way we think about the animal that film is representing. Yet on the other hand, we have movies like Night of the Lupine, about a bunch of killer rabbits, that end up being nothing, if not silly. And it can sometimes be hard to tell what “killer animal” movies fall into what category, so allow me to do some of the leg work for you. Here, in this writer’s opinion, are the best “killer animal” movies that don’t get enough love, listed in no particular order. 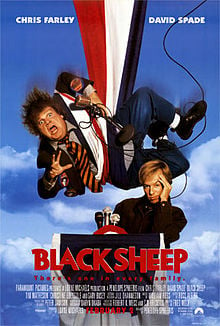 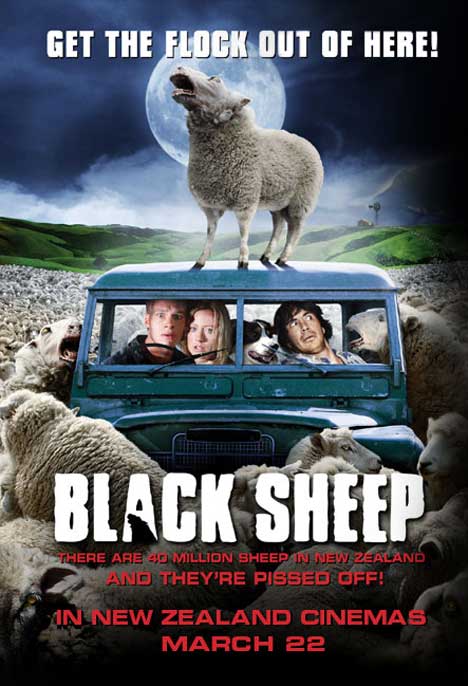 In this 99% society, the sheep are supposed to represent us rising up and defeating the controlling 1%. Just kidding.

This 2006 horror comedy hybrid is almost as awesome is Shaun of the Dead. Some people get mad at me for saying that, until they see this movie and pick up on the very similar sensibilities of gore and emotion mixed with some genuine lulz.

Black Sheep is about some genetic experiments on sheep that go terribly wrong, and turn the sheep into bloodthirsty monsters. While that idea may sound one-note, there are so many insane scenarios that end with more gore than is expected, as well as some genuinely hilarious moments,that it is hard not to walk away from this film an instant fan. The movie gets REAL points for using all practical effects and no CG,too, yet never skimping over the gore. Think Day of the Dead with sheep and you have a pretty good idea. Also, you will never look at a sheep in the road the same way.

The Ghost and the Darkness 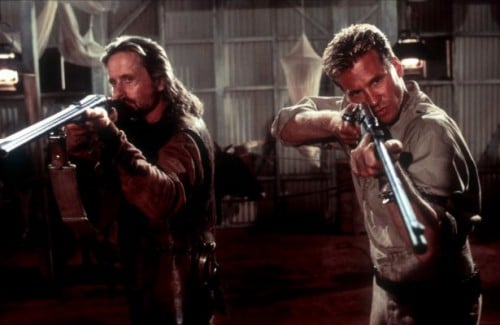 I like this one because it was true. I am a nerd, so I knew enough going in about the actual story to be excited to see how it played out, and honestly, it was good.

There is something unnerving about the idea of lions hunting humans, and for a small chunk of time in a Kenyan village, that is just what happened. Not only did the lions just happen to attack some villagers, but it became quite evident they were trying to hunt all the humans in the village, killing a few off for a time. Val Kilmer and Michael Douglas did an entertaining job as the two men cursed with having to take the lions down and end their reign of feline terror. It was well acted and well executed, and anyone who says lions are not stunning, yet terrifying creatures, has never seen Lion-O angry.

Funny side note, I should rewrite this movie as “Reign of Feline Terror”. That name sells itself. 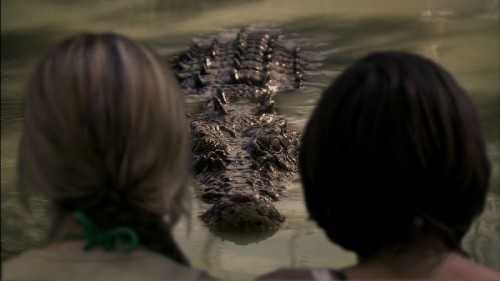 This croc is so talented, it can have two separate staring contests at once.

Another one based on a true story, this movie is why a piece of crap like Lake Placid is not on the list. Black Water is easily the creepiest croc (in this case, though gator in many others) film I’ve ever seen, and has a sense of realism utterly lacking from other attempts in the genre, like Primeval. This is easily the best of those three films, so we can put that (non-existent) debate to bed, finally.

Black Water is about a group of people on a fishing trip in Australia who get stuck in some mangroves and get stalked and hunted by a massive crocodile  Instead of just hammering scares at us, the film lures us in with a growing sense of tension that you can feel. They have nowhere to go, and this croc knows it, and is simply waiting for when the right time comes to pick each of them off, one by one.  It shocks me how few people have seen this. And most I recommend it to come back and thank me for it. The scene in the dark, illuminated by the lightening crashes, is unforgettable. 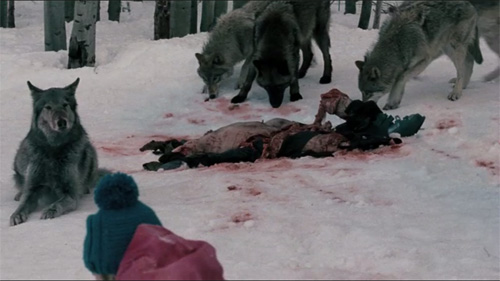 ” Hey casual wolf in front chilling, what you up to?” “Ah, nothing. Just wolf stuff.”

Okay, warning, right off the bat, Frozen is The Grey: light. It really is.

But Frozen deserves some REAL props for setting the tone first. Nihilist movie set in the snowbound wilderness that cast wolves as feral beasts that just wants to eat people for fun and nom noms. While wolves are not nearly as insane as they are portrayed in these two films, ( I know this because I have a wolf friend named Paco who says he feels greatly misrepresented by these movies) they are both still creepy films that get under your skin and stick with you long after you see them. Frozen is here because less people have seen it, though.

While this movie may not be as epic as The Grey, it set up “stuck in the wilderness at night with wolves” scenario nicely, and was an exciting spin on the killer animal movies we are all so used to up to that point. Did lose MAJOR points for snow boarding scene, though. Dafuq was that? Everyone knows wolves would just strap on snowboards and chase after you, grinding WAY more powder than you. Duh. 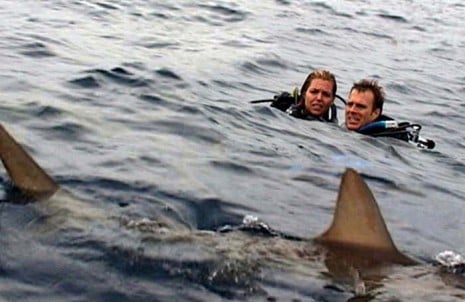 At that point, I would be trying to drown myself before the sharks got me.

Okay, odd confession time: Open Water is one of those movies that f*cked me all up. I just found the film to be extremely nihilist in a time before I was nihilist. Yes, it’s true, I haven’t always been this way. I am a product of my environment, but I digress.

Open Water was the (Slightly true and mostly glorified) story of a couple that went on a dive with a group while on an exotic vacation in Australia (why do so many of the films on this list take place in Australia? Because every deadly species of everything lives out there), and while underwater, were unintentionally left behind by the company holding the dive. By the time they realized it, the sun had set, and when they looked for the couple, they found nothing.

This film fills in the gaps of the story by having us waiting around with the couple while they are, inevitably, waiting around to be eaten by circling sharks. The sharks come and the sharks go, but we all know how it is going to end. It makes a very uncomfortable viewing experience, and one that made me as afraid of deep water as the generation before me was of shallow water. So Jaws fucked up my older brother, and Open Water fucked me up. Even though Jaws is based on a true story, too.

I will always remember what that naked homeless man I found in my closet told me: The ocean is the Devil’s playground. Man, he was right.

The Brotherhood of the Wolf 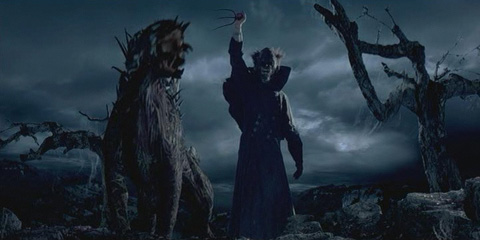 I will say it again, this new “edgy” Pokemon reboot actually looks like it might be good.

I love that this is on a list of movies about killer animals, yet people reading this list having never seen the film will think it is about wolves, and understandably so. And while there ARE killer wolves in the movie, the real “animal” I am speaking of from this film is something I won’t reveal here, but will say in all confidence, is one of the coolest on screen animal ever.

While I consider this french film from 2001, wonderfully directed by Christophe Ganz, too amazing a film to ruin, I implore you to see it, and see the beast I am hinting about in all it’s glory. A brilliant spin on a creature we have seen many times before, but never like this. Armored and ready for battle, it is the perfect final beast to leave you with as I bid you adeau.

So what is your favorite under appreciated on-screen beast? And no, Beast from X-Men doesn’t count. ESPECIALLY that whack ass Kelsey Grammer version. Actually, both of them sucked. 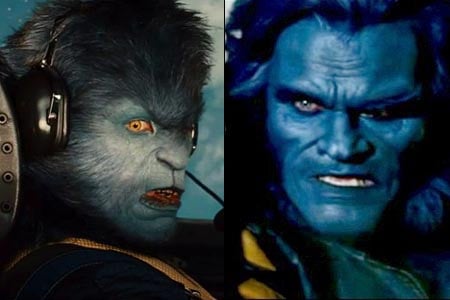 Dear Marvel (and Disney), Beast is a character that does not transcribe to film properly, so stop trying. Please!

In honor of Scream 4, out today, I figured I’d make this debate Ghostface’s central line in all the movies so far. I doubt that most people’s favorite scary movie IS Scream, but I just…

I originally titled this write up as “Underrated: Brad Pitt” but felt that it’s not necessarily that he’s underrated, but that he’s overlooked and still seen as the “pretty boy” rather than an amazing talent….

(click to enlarge) I’m not sure whether I’m still that upset about how dumb certain aspects of Prometheus were, or I just like watching people feel the need to vehemently defend it for some reason….

Two of our most beloved fictional characters happen to be small and green, and if they existed in the same universe, it would be hard not to imagine them as friends. Here Kermit and Yoda…

Judging by when this picture was taken, this guy is probably 40+ now, but I wonder if he’s still excited that Arnold is now returning to acting after governating the last few years. I wouldn’t…

Uh, wow. No, seriously. I’ve seen “oh this guy kind of looks like this cartoon” pictures before, but there’s no way on earth that this guy wasn’t the actual character model for Carl from Up….