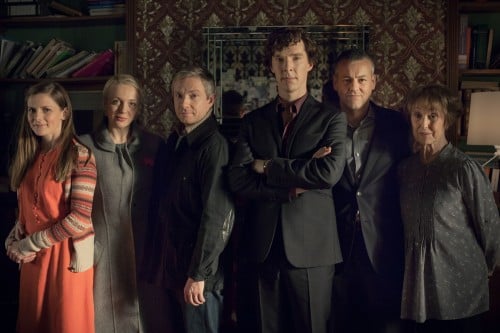 It’s quite the mystery how I ever got into Sherlock.

When I first heard about the series I was immediately turned off. I sighed and couldn’t believe that even the BBC, a network known for its uniqueness and quality would stoop to the rehash retread trend that every other entertainment avenue seemed to be following. Sherlock Holmes? Again? Would I be watching? Elementary, Watson, freaking of course not.

But one lonely Netflix night nothing sounded good and disposable mystery was a meal I wouldn’t mind consuming. And now here I am, Sherlock megafan, still refusing to throw out a ratty old coat of mine because it kind of looks like Benny’s—er, Mr. Cumberbatch’s. Moffat and Co. found a way to reinvent the wheel, adapting century-old stories into sleek, chic, modern television masterpieces.

A show with better replay value than most modern video games, I devoured the first two seasons of Sherlock many times over, picking up something new every time. I couldn’t wait for the promised third season, and when that glorious day came and PBS posted “The Empty Hearse” I couldn’t believe it when the video was loading on my computer.

I turned it off.

I had literally waited years for this moment but I decided…what’s a few months more? No, no, if I was to fall in love again, it was to be the first way: non-stop. I don’t allow my emotions to run start and go and I wasn’t going to start now. When season three in its entirety found its way to Netflix, then would I watch.

And guess what I just noticed the other night.

But would my passion remain? Can lightning strike…thrice? Was this a mystery worth more pondering…or are all the clues misleading? The game is afoot, Unrealtors. 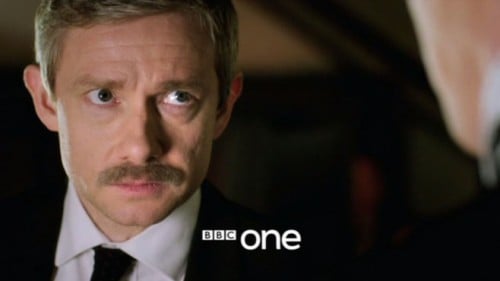 So, first things first, if you’re a fan of the series…I would be stunned if you didn’t love this third season. Never before have I seen such well executed fan service. We get plenty of winks, nods, hanged lanterns, you name it. There’s something for everyone if you’re locked into Sherlock, and while the number of nods may surprise you, it never feels too overwhelming. You’re gonna have fun, but not at the expense of the plot.

Of course the mysteries are as spot-on as ever, but when you’re cribbing from arguably the greatest mystery writer of all time, you’re bound to have some sharp stories. In a world of iOS and Google it’s hard to make a one-hundred year old conundrum fun, and, more importantly, feasible, but somehow our sense of plausibility remains and the stories are all the better for it. Take note, Hollywood, the Limeys have figured out how to perfectly adapt, and perhaps even enhance. 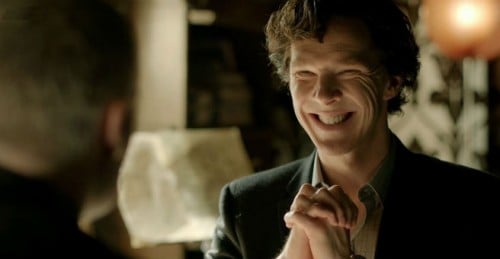 The devil is in the details, and season three doesn’t miss out. If you’re a Sherl-hawk like me, you keep an eye out for the littlest of littles. Don’t worry, coming back for thirds was a great idea. The word is polished, and boy does season three shine. My personal favorite, out of many, is the varying fonts for the kinetic typography that has become Sherlock’s signature, brilliant, revolutionary expository device.  Sherlock’s thought font compared to say a hospital’s morphine drip font is unique, accurate, and, oddly, a very telling character feature. Pay attention to the differences. The silent letters speak volumes.

But of course the reason we first swooned wasn’t the fonts or the winks or the solutions…it was Sherlock shooting the wall. It was Mrs. Hudson insisting she wasn’t a maid. It was John hearing Sherlock’s subtext as “Punch me in the face.” This show has also been an exquisitely dressed neurotic weirdo, and that’s why we all fell in love. And folks, without wanting to ruin anything, they’re all back, better than ever, twice as charming, and each has evolved leaps and bounds. It isn’t business as usual, in fact, quite the opposite, and what a refreshing thing this strange, rare storytelling substance we call growth is. 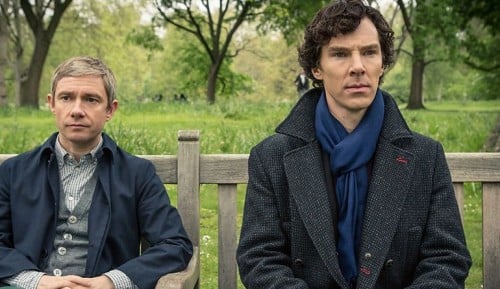 The biggest character on Sherlock, however, has always remained faceless. And that is Steven Moffat. I know, Whovians, you have your gripes, but over in Sherlock Forest he’s still a welcomed face. While maybe Moffat’s strings are showing a little more this time around…I’m okay with that. And I think we all should be. There’s such personality and heart throughout this series and that can only come out of a writer cutting himself open and bleeding all over the page. Without our heaping helping of Moffatry we’d have just another slick, but ultimately pointless procedural with accents. Or CBS’ Elementary (friendly ribbing, everyone). Moffat breathes life by sharing his air, and if that’s not for you, I’ve got about sixteen thousand or so episodes of various CSIs you might enjoy.

So…watch season three of Sherlock. It’s just brilliant. Yes, I realize that I’m a rampant fanboy, but I’ve found that we’re most often the hardest to please. I never wanted to like Sherlock. I’m still amazed that I love it. It goes against so much of what I think is the problem of modern pop culture entertainment. But that’s just from a superficial point of view. When you break out the magnifying glass you see that this is so much more than mere repetition. This is newborn television life that may share its father’s name, but is ready to realize its potential so much more. 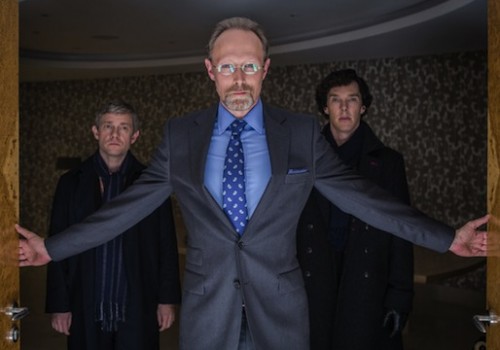 Sherlock is the Hendrix’s cover of “All Along the Watchtower” of television adaptations.  And season three is another perfect, beautiful chorus.

Back in June, fellow Unreality writer Nick Verboon posted an article that caught my eye: RWBY Trailers Will Kick Your Ass.  The new web series was teased with 4 brilliant trailers, each one a stylish,…

httpv://youtu.be/iMUezhpuEoE Simon and Garfunkel’s The Sound of Silence is one of my favorite classic pieces of music out there. And by classic I mean things that aren’t CLASSICAL music, but rather classic tracks from before…

It’s sort of a running joke in the industry that Lost had a rather terrible finale, and squandered a relatively cool concept with a bunch of confusing hocus pocus in the end. Other showrunners and…

(click for full size) I don’t know why, but this is the most confusing image I’ve seen in quite some time. Like, I understand what’s happened here. The Griffins have been given the body types…

I haven’t played with LEGOs in close to a decade now, but that doesn’t mean I don’t recognize a good set when I see one. This Arrested Development LEGO set is currently up for votes…