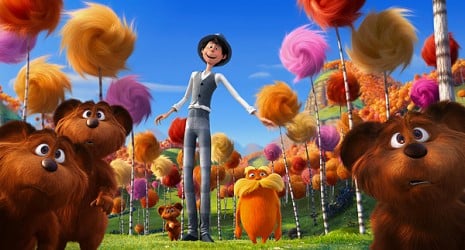 Dr. Seuss books were a treasured memory for a few generations of children, myself included. But in today’s world, kids don’t have to read the classics anymore. Rather, they can just wait until the stories are turned into CGI feature films voiced by their favorite celebrity heartthrobs.

But just because something worked as a twenty page, two hundred word book, that doesn’t mean it’s going to make an effective feature film, no matter how much of a genius the original author may have been. The Lorax, with all its flash and cash, doesn’t manage to emulate what  made the original story great.

This new version has added a lot of padding to warrant its ninety minute running time, and time is divided between two distinct stories. Ted (Zac Efron) is a resident of the all-plastic Thneedville, located in an area which hasn’t seen a natural bit of plant or animal life in eons. His pretty neighbor Audrey (these aren’t very Seuss-ian names by the way), voiced by Taylor Swift, wants to see a real life Truffla tree, long thought to be extinct, and so Ted has a mission. 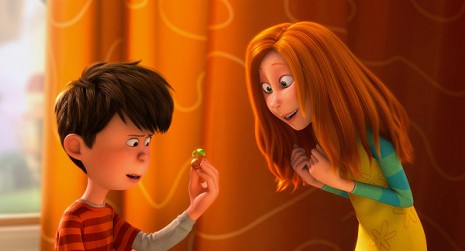 What mockery is this?

At the advice of his grandma (Betty White, she’s so hot right now) he sneaks out of town  much to the dismay of Mr. O’Hare (Rob Riggle), the town’s wealthy industrialist who has made a fortune selling bottled air to Thneedville’s citizens. Ted’s quest for trees will allow the people to potentially get his product for free.

Ted locates the Once-ler (Ed Helms), an old shut-in with a story to tell about how he chopped down all the Truffla trees at the behest of a magical forest creature, The Lorax (Danny DeVito). His tale is told in a series of flashbacks that recall his rise to and fall from power.

Seuss’s animation style lends itself to animated film, but the script does not. Much of the charm of Seuss’s books was not only the unique animation, but the sing-song lyrics he wrote to accompany the images. When you have a Hollywood pro scripting things instead, you get a whole lot of slapstick comedy and fish singing the Mission Impossible theme. Just once, I’d love to see someone take up the challenge of scipting a film like this ENTIRELY in rhyme. 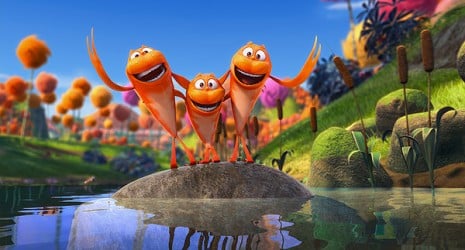 Some things are better left in two dimensions.

The environmental message is obvious and more relevant today than it was when the book was first published in 1971. This has drawn fire from the same crowd who thought that The Muppets was anti-capitalist because their bad guy was a wealthy oil baron determined to demolish their studio. Rather, if anything, the message is a bit hypocritical because as a cross -promotion for the film, The Lorax has been seen hawking a “green” Mazda SUV, as if there really is such a thing.

The film just isn’t funny, and even its elaborate musical numbers on the whole fall flat. Efron and Swift are clearly only there to get their names on the poster, while Ed Helms sounds too much like his Office character as he wails on the guitar during his flashback sequences. I did like the Lorax himself, voice cast well as Danny DeVito, but sadly he doesn’t get half the screen time of other characters.

While the book ended on a relatively cryptic and bleak note, the film has to craft a happy ending that ends up involving an elaborate car chase and a grandma snowboarding. It sounds like a bad cereal commercial, but it allows the film to end on a somewhat more heartwarming note. 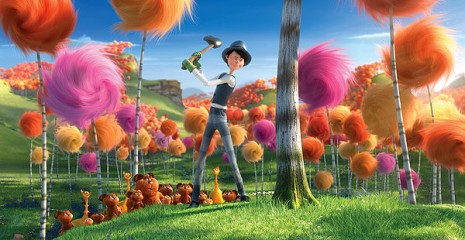 To be fair, those trees look delicious.

I just don’t think Seuss books translate to film all that well. Both with The Lorax and Horton Hears a Who, there simply wasn’t anything  there to make it on par with Pixar or Dreamworks classics as of late. Seuss’s The Grinch worked in live-action form only because of the exceptionally dedicated performance of Jim Carrey, but I don’t think that sort of success can be easily replicated.

It’s no slight to Seuss that his short rhyming stories don’t necessarily make for great feature films. Could you really turn Toy Story into a 100 word book and have it have the same effect as the film? Sometimes stories only work in their original mediums.

The message is on par, but the delivery is off, and I’m not sure The Lorax would appreciate the manufactured symbol of generic Hollywood animation he’s become.