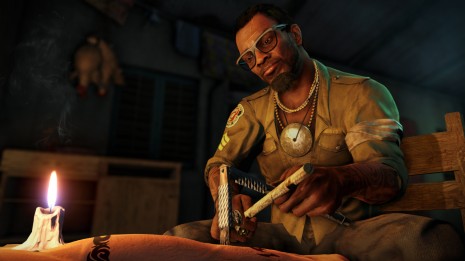 (whoops this was supposed to go up yesterday, read journal #1 here first)

Two journals in one week! Well, let’s just say I’ve been playing a hell of a lot of Far Cry 3 lately. The completionist in me had to do every hunting, assassination and racing challenge, in addition to clearing the entire pair of islands from enemy bases, so I’m guessing it took me a little longer than most get through the story after about 20 hours of gameplay.

This entry won’t be nearly as long as the first, which covered a large part of the central premises of the game. When I last left things, I guessed that I was about 40-50% done with the game, and was curious to see how it evolved from there. And does it?

No, not really, but that’s not necessarily a bad thing. Yes, the game can get a touch repetitive, as you do the same sorts of side-quests over and over to get cash and XP, but that said, I was still having fun until the very last soldier on the island had been eliminated. Unlike most open world RPGs where enemies respawn an infinite number of times at the various landmarks, there’s something very gratifying about killing bad guys and having them stay dead for good. 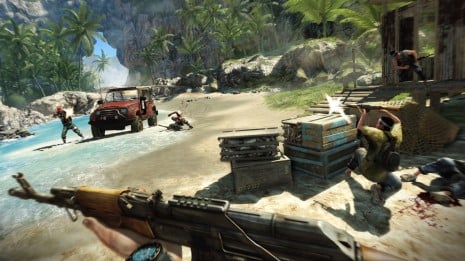 This works in tandem with the Far Cry XP system which I love. There’s just enough content where if you do 90% of the side missions, you’ll be able to level up EVERY skill in your arsenal. There’s no picking one of three trees to go down, and there’s only one real choice you ever have to make in the plot, and it’s in the last thirty seconds of the game. What I’m saying is that this is a game that solves the replay value problem I’ve had with other open world games like this. You don’t have to beat the story twice or clear out the same camps five times in order to max out all your skills and own all the best weapons. If you simply play the game and do the optional objectives, you come out at the end with everything you could possibly want. It’s…satisfying, and that’s something I can’t say about many titles these days.

The gameplay just doesn’t get old. Yes, the second half of the game simply had you killing “privateers” instead of pirates, but other than their different uniform color, they behave the same way. I still think it’s strange that in enemy bases, a soldier can watch his buddy get riddled with bullets right next to him, but so long as he doesn’t see the shooter, there’s no cause to raise the alarm. But ignoring reality in this way is the only thing that makes stealth takeovers of bases remotely possible.

And then there’s the story, which only got better as time went on. I had some fun about the whole “frat boy turned native warrior” thing, and the plotline is somewhat derivative of the other 50 stories that had a similar premise, but it does somehow feel fresh here. As Jason gets more and more involved with the local tribe and his desire for revenge outweighs his need to leave the island, you can actually feel the transformation of your character. That is no small feat considering you never actually see yourself for the duration of the game, not even in cutscenes. It’s an FPS that actually makes you FEEL like the character you’re playing. That may sound redundant, but in truth, not many games can pull this off. 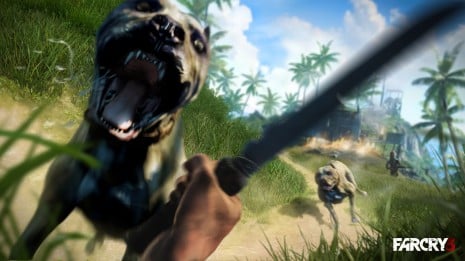 Any enemy base with dogs = f**k that, I’m going in with an RPG and machine gun.

This story also works because of the fantastic voice acting. Jason can be annoying at first, but you can feel his emotion as the story goes on.  The other characters in the story are all expertly voiced, and motion capture ensures they move like real people, rather than simply talk like them. Far and away pirate leader Vaas is the most interesting and well-acted character in the game. I was quite sad when you kill him about midway through and he doesn’t show up for the entire rest of the game, even as a hallucination, which is something that happens frequently on the island. Sorry if that’s a spoiler, but I think it’s safe to assume you’re going to kill an evil boss character at some point. I think the game made a mistake making him a mid level boss, as you don’t really have the same level of hate or interest toward the final guy. I can’t even remember his name.

This is a good game, even a great one. There’s something to be said for a game that can be repetitive, but still is fun for the duration. The gameplay is just that engaging, that it never feels old, even after taking over your 36th enemy base. And the fact that the story is actually engaging, well-thought out and well-executed is a huge bonus. If you play straight through the story, I’d imagine it’s an even more cinematic experience.

Yes, the campaign can get a bit COD-ish sometimes, but there are some levels that require you to use your head. I didn’t mind that they threw difficulty to the wind in the final chapter of the game, as they simply have you fly around in a helicopter blowing stuff up with ease as “Flight of Valkyries” plays. I’m guessing they assumed enough of their target audience hadn’t seen Apocalypse Now so they could pass off that epic moment as their own creation.

This is my favorite single player shooter of the year. Halo 4 is great for deathmatch multiplayer, Borderlands 2 for co-op, but if you like adventuring solo, Far Cry 3 is the game for you. 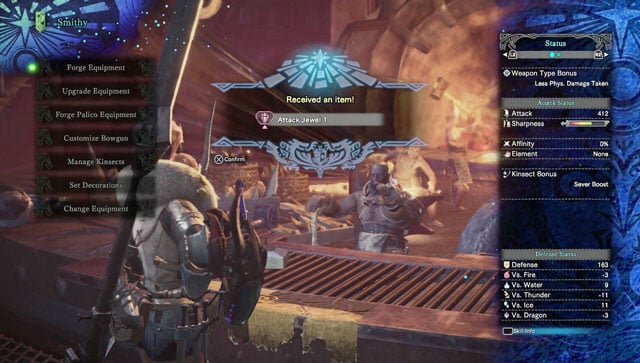