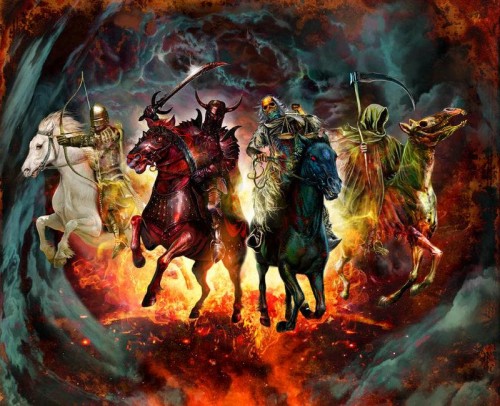 You know what they say about all good things. Children grow old and die, empires rise and fall, stars are born and extinguished all across the infinite galaxy, and Sara Clemens doesn’t write for Unreality anymore. Likewise, it is the way of the world that mankind’s days are numbered, and while that is a sad thought if we have to go out, I say we do it in style. None of this pointless nuclear war stupidity or “not with a bang, but a whimper” stuff. If we’ve got to go, let’s hope it’s suitably badass.

The Mayans may have been full of it, but that doesn’t mean the end isn’t still nigh. If wackos holding signs and shouting in the streets have taught me anything, it’s that the end is always freakin’ nigh. These are my favorite apocalyptic daydreams culled from my journeys through the countless realms of fiction. For the sake of avoiding excessive triteness there will not be zombies. Sorry for the inconvenience.

The Coming of Galactus 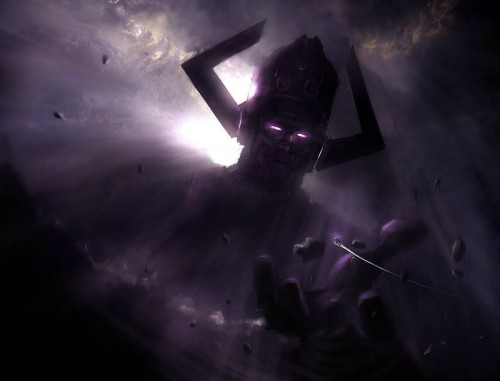 Wake up in the morning. Look at the sky. See this. Change underwear.

When Galactus hits the scene, you know shit’s about to go down. There are countless unoccupied planets out there he could be devouring, but no; it’s only fun if billions die as a result. Maybe the “G” on his belt isn’t his initial. Maybe it stands for “gangsta” because Galactus just don’t give a f**k.

Not only does this guy have a machine that converts the life force of your planet to energy, but he can give people awesome superpowers so it might be a good idea to suck up to him. He just might make you one of his heralds and you can scour the galaxies for edible worlds. That’s my angle. I’ll get to see the infinite universe, meet new people, and laugh as my boss totally owns their crappy planets. Good times all around. You know, except for all the genocide.

The Rise of the Machines 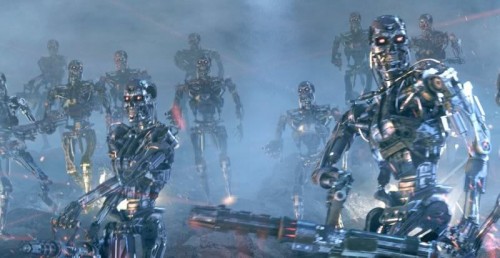 Can they all talk like Arnold? That would make our extermination so worth it.

Out of all the possible ways for the end of humanity to happen, this is the most inevitable. No joke. Our biology is too adaptable for a plague to properly wipe us out, zombies aren’t actually a thing, and you don’t get anywhere in politics by having a spine so nuclear war is actually really unlikely. But science? Science never stops, and it only goes in one direction.

The only real question is how should we design our unfeeling, genocidal robot overlords: Cylons, Replicants, Terminators, Geth, or Matrix style? I think murderous sexbots would be kind of a cool way to go. I’m pretty sure Japan is already on top of that (as seen in Ghost in the Shell 2). Speaking of our crazy friends in the land of the rising sun… 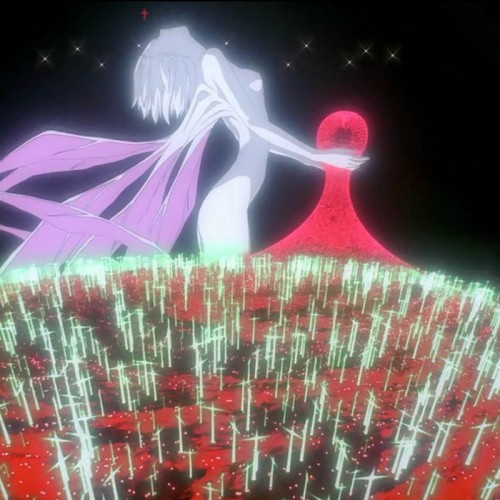 Where to begin? 26 episodes and one of the most epic film finales in entertainment history and a couple decades later there are only a limited number of people who understand just what the hell Neon Genesis Evangelion is all about. You’d need a PhD to really understand it all. You’d possibly need several.

Combine genetic biotechnology tampering on a massive scale with Biblical and Babylonian mythology, metaphorical individualist and solipsistic philosophies, and a giant naked anime girl, and there’s the Third Impact for you. It’s simple when you think about it. Why wouldn’t that unholy combination end the world?

So the end game here is that rather than existing as billions of unhappy individuals incapable of ever truly understanding each another, the things that separate us from one another will be removed and we’ll all exist as one big united ocean of souls. Conformity’s never been my bag, but I’d be willing to give it a go if the alternative is being flash-fried on the orders of psychotic politicians. 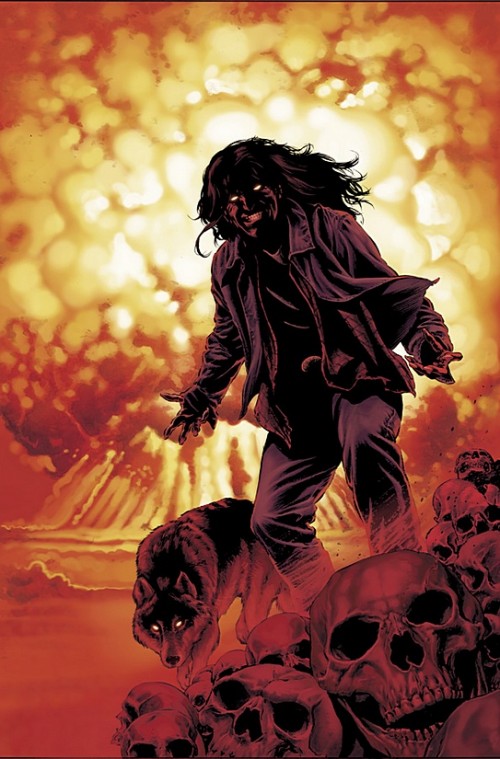 The trick here is to avoid dying in the Captain Trips plague that wipes out all but 1% of the population. Kind of bring a different meaning to the Occupy protesters’ slogan of being the 99%, huh? Still, I think of Stephen King’s scenario as the be-all-end-all of apocalypse stories featuring a little bit of everything. Religion, supernatural beings, infectious plague, atomic weapons, love, survival horror, betrayal, and acute pyromania; yup, it’s all there.

The Stand ends up kind of like a trumped-up version of the video game Populous where you have to rebuild your own good society on one part of the map (the map being America in this case) while an evil antagonist builds his society up elsewhere and eventually, one is going to have to destroy the other. So the question is: do you go to Vegas to live in revelry with Randall Flagg or Boulder, Colorado with the goodie two-shoes’ and Mother Abigail?

If you are familiar with the story and my online history, then you know the answer is a little more complicated for me. Too socially defunct to live amongst the shiny sappy people, but probably a bigger danger to the opposition than they’ll ever figure out when he heads out that way. I just want to blow stuff up. 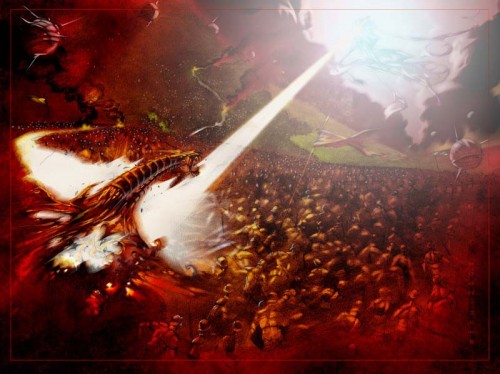 It might be cool to not be raptured just so I could see this go down.

Hey look everyone, there is a God and he really did have a plan! Sure, it was a pretty f**ked up plan, but now he’s here to rapture all of the righteous into eternal paradise where we were all supposed to go anyways when we died of natural causes or whatever. It’s cool, though; mysterious ways and all that. My body is ready, Lord.

Wait, what do you mean I didn’t give enough money to institutions led by pedophiles and bigots while I was on Earth? Really God? REALLY?! Well, at least I get front row seats to the greatest show on Earth. I’m sure Satan knows how it’s going to end being that he’s already been down this road, but I appreciate him trying because who doesn’t want to see the Four Horsemen with their own eyes?  I can already hear the Metallica song blasting.

I’m going to be pretty disappointed if the dragon and beasts are metaphorical. How lame would that be if the religious conservatives are right and Obama is actually the Antichrist? So unsatisfying. I mean, if the entire prophecy is metaphorical this whole scenario probably isn’t happening so let’s just say there is a literal dragon and seven-headed beasts with an alarmingly asymmetrical number of horns and “blasphemous names” for each head. I kind of want to hear what the blasphemous names are. They sound neat. I’ll bet they’re like black metal band names.

But yeah, before zombies, before the plague, before comics and moving pictures, before technology or alien invasions or any of it, you had Revelation. The granddaddy of all of the apocalyptic scenarios in our culture still inspires imaginations the world over and is the subject of study by those who think of it in metaphorical terms and in literal ones. And how often do you hear it referenced in other apocalypse stories? Like, just about every time out? Sounds right. 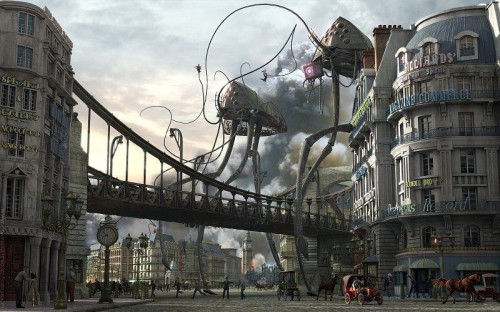 Sorry, alien invasion. I didn’t get to you this time, but you’re still awesome.

So who wants to be a lone badass wandering the post-apocalyptic wastelands? I do! I do! If you survive, maybe we can team up and take down some cannibals or a despot or something sometime. It’ll be cool. And if I could get one of those telepathic dogs, I’d be all set.

Feel free to share your own wishes for the demise of the human race. And remember to be prepared. I know I am… 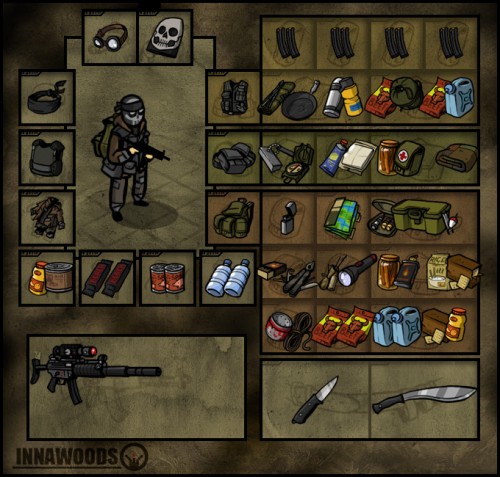 Let’s freakin’ do this!

While we might not see Jackie Chan on the American big screen as much as we used to, that doesn’t mean he’s still not one of the most beloved martial arts actors in the world. …

I know we tend to go a bit overboard on the Star Wars stuff on this site but let’s face it.  It’s all pretty awesome if you ask me.   And this sculpture is just another…

httpv://youtu.be/rliqwWV46AM It’s one of those video projects that just makes you smile. One intrepid Joss Whedon fan saw fit to combine two of his greatest achievements, Firelfly and The Avengers, into one video. In it, we’re… 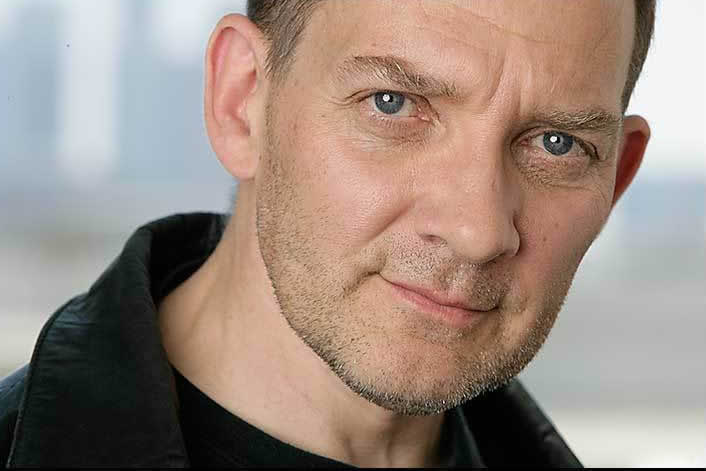 As I was watching Fight Club for the 600th time the other day I realized that the dude that plays Ed Norton’s boss needed a spot on this website.  After all he’s on television shows…

From artist LD Austin comes literally the most terrifying unicorn that has ever existed. The creatures are all sweetness and light most of the time, but when you really think about the core concept of…

Given how much coverage we’ve recently had on E3 I figured it was my responsibility to dig up the rest of the scraps that keep surfacing.  What better a way to start than with the…