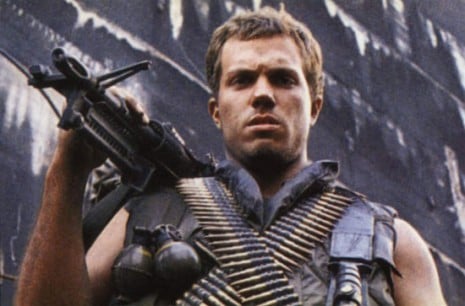 Oddly enough I first saw Adam Baldwin as a mean bully in the 80s movie Reckless.   That was a pretty cool movie about a rebellious type in high school who gets involved with the typical blond cheerleader.   Darryl Hannah is naked in that film and Adam Baldwin plays Mr. Jock butt head.

Most of you know Baldwin as Animal Mother in Full Metal Jacket.   But Baldwin’s been around the block more than once in Hollywood.  His other notables include a starring role in DC Cab and playing a military man in Independence Day.

All tolled, Baldwin has 104 titles to his name so he’s no stranger to the screen.  It’s hard to believe this guy is 50 now.   Actually he turned 50 yesterday.  Happy birthday Adam!

A clip after the jump…..

You can talk the talk but can you walk the walk?

We’ll be back tomorrow. Hope you are enjoying the long weekend and remembering why it exists.

Over the years we’ve seen our fair share of funny galleries containing superheroes doing the most menial of tasks.   We’ve even seen pictures of what they’d look like in old age.   And since it’s been…

You killed my father.  Prepare to die!

Everything is awesome when you’re the #1 toy in the world! We take on the much-beloved LEGO Movie – with some help from Epic Rap Battles of History’s Nice Peter and EpicLLOYD!!! Via Screenjunkies

Sometimes Paul and I come across artists we tend to like and just post their stuff.  So it’s not like today we’re gunning for Cosplay or Superhero art or anything like that.  Today I just…

The gaming year is over. There are no more titles of note releasing this year. There aren’t any exciting surprises in store for us in 2014. The only thing we can do is look toward…