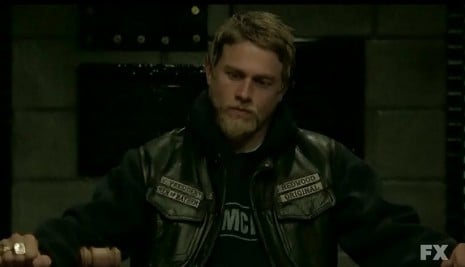 As you may have noticed, I don’t review Sons of Anarchy on a weekly basis as I usually only do that with one show at a time. But with the way this season of Dexter has gone, I almost wish I had made a different decision, as at almost all times during this fall, Sons of Anarchy has been the best show on TV.

This isn’t a new phenomenon,since the show was superb in seasons two and three, with the finale of the latter being one of the most jaw dropping hours of televisions I’ve EVER witnessed. I wanted to at least touch on this fourth season’s final episode, even if I’ve missed discussing all those that came before it.

What I have written about SOA recently is that I discovered that the show is a loose interpretation of Hamlet, with biker gangs subbing in for nobles. But the real meat of that is that there’s a son (Jax) haunted by the ghost of his father (John) and he must rise up and kill the king (Clay). With Jax discovering ALL Clay’s misdeeds last episode, including killing his father, his best friend’s father and trying to kill his wife, it seemed clear what had to be done. 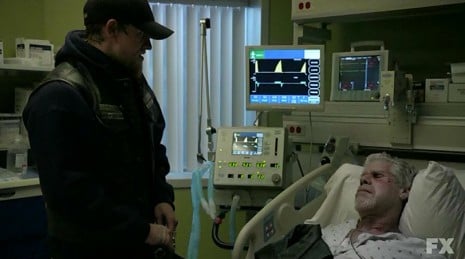 Not exactly an honor killing, but it would have done.

This is the problem with successful television. Sometimes you’ve built an arc that’s perfect for a penultimate conclusion, but the high ratings of your show force you trudge onward even if creatively that’s the wrong decision. It happened with Lost, it’s happened with 24, it’s happening with Dexter, and now it seems like it might be the case with SOA as well.

This should have been the series finale, with Jax killing Clay amidst a shitstorm of chaos. What we got instead was an ultimate anticlimax. It wasn’t a horrible ending per se, but the entire tension of the last eleven episodes was instantly diffused by a few strokes of the pen on the script.

The RICO case was dissolved when it was revealed the Galindo cartel was working with the CIA and their operation had to continue unimpeded for the “stability” of Mexico. Otto flipping was stopped for the same reason, and Juice’s record was wiped clean out of the kindness of the DA’s heart. Worse yet, Clay was forced to be allowed to live so the deal can go through with the Irish which is what the CIA demands, lest they take down the entire club. 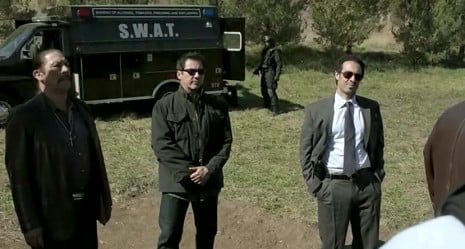 Don’t get me wrong ,it was an expertly set-up way to allow the club to escape disaster at the last minute. The best seasons of shows are when all seems lost, but then things resolve themselves in a completely unexpected manner. It happened with Dexter, when it seemed he would be identified as the Bay Harbor Butcher in season two. It happened in 24, when Jack Bauer volunteered to sacrifice himself to detonate a nuclear bomb to save millions. It happened last season in Sons, where all appeared to be coming crashing down, but then the script was flipped which created an exceptionally satisfying finale.

This wrap-up was smart, but it wasn’t satisfying the way last season’s was. Yes, it was very cool to see Jax finally take his place at the head of the table, but it seemed like the entire season was building with a slow boil but the burner was turned off at the least minute. This would have been a PERFECT way to end the series for good in my estimation, but the show will live on for as long as the numbers are there. Few shows actually volunteer to quit while they’re ahead (really only Seinfeld comes to mind), but I just hope Sons doesn’t wear itself thin as I’m not sure how long it can keep up this sort of breakneck pace.

So next season we’ll tune in to see what gangster the club has pissed off by Tig accidentally killing his daughter, and we’ll see what the CIA wants from the club and how Jax handles a neutered Clay. But even before this stuff happens, I really think this was the season to end it all, and I just hope the show can keep delivering after deciding to press on once more. 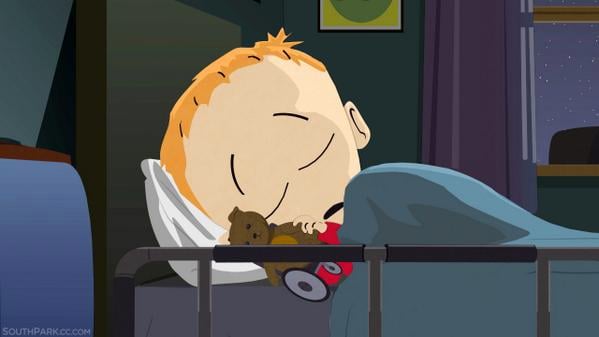