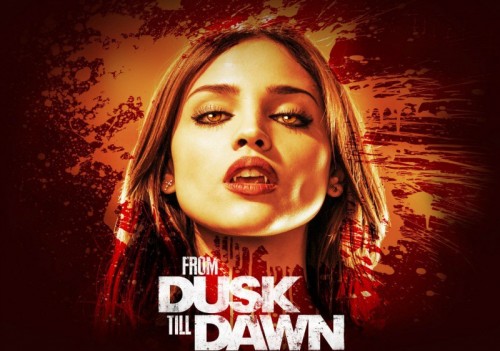 It’s a rare thing for a creator to revisit and expand upon their existing work. We’re accustomed to the slew of modern remakes and reboots of cult films by now, but to have a director decide he wants to expand his own classic film into a full television series? That’s a special kind of idea.

I was pretty excited when I heard Robert Rodriguez had started his own cable channel, El Rey, in order to bring even more of his Mexican-American flavored brand of tongue-in-cheek action entertainment to the public. Last week, Sin City: A Dame to Kill For inspired me to take a look at Frank Miller, and this week it’s co-director Rodriguez’s turn. My current cable package sadly doesn’t carry El Rey, but -as it so often does- Netflix has my back on this one and I got to enjoy the televisation of one of the most unique and badass vampire films of all time this week. The Titty Twister bar is back open for business and the Gecko brothers ride again. Let’s see how it went.

For those not in the know, From Dusk till Dawn tells the story of a pair of sibling bankrobbers on the run to Mexico. They end up taking a family hostage in an attempt to get past the border and reach their contacts on the other side where they take refuge in a strip joint. Then shit gets real. In the pre-grindhouse revival days, it seemed like the most insane thing ever and by any standard it’s still a ton of fun and a 90’s horror mash-up touchstone. The television show does a pretty respectable job of bringing that concept to the small screen in spite of its limitations.

I seldom do this, but I’m going to lead with the cast. The original From Dusk till Dawn featured a star-studded ensemble with some career-defining performances among them. How do you replace a cast including Harvey Keitel, George Clooney, Quentin Tarantino (who also wrote the script), Juliette Lewis, Salma Hayek, Cheech Marin, Tom Savini, Danny Trejo, and Fred Williamson? It was a perfect combination of mainstream Hollywood faces and cult cinema heroes written by one of the craziest writers in the business and directed by one of the most stylish action directors out there. Rodriguez as showrunner is the only returning member of the original crew, with all new faces in front of the camera. Can they possibly recapture the magic? 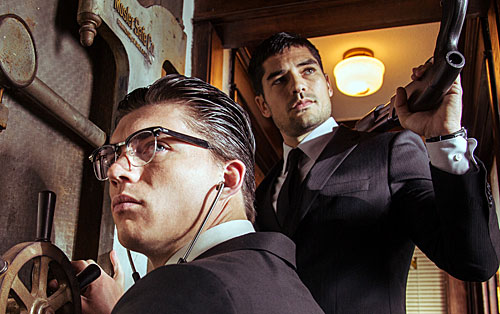 Unsurprisingly, the bag is mixed. Out of the actors, DJ Cotrona does the best job of channeling the original performance as Seth Gecko. Clooney’s performance in the role of the cynical (but not quite morally bankrupt) bank robber with a big mouth was my favorite of his career and Cotrona did as good a job as could ever be expected. Zane Holtz plays his psychotic brother, Richie, in the role Tarantino lent his permanently-agitated demeanor to (in a rare authentic-feeling performance from him). No big complaints there either.

Salma Hayek’s Santanico Pandemonium (which totally sounds like a lame Star Wars villain name) is one of the most unforgettable female vampires in cinema, but that’s largely thanks to her giving one of the most epic exotic dances ever captured on film. The role wasn’t exactly well-developed in the non-physical sense. She’s replaced by Eiza Gonzalez and although I have a severe crush on Hayek, Gonzalez is at least as good and makes the character’s expanded role her own. And let’s be honest, that face on the poster will put butts in seats. Bedroom eyes for days on that woman.

Robert Patrick replacing Keitel in the role of the ex-minister father of the Fuller family is a weak link along with Jake Busey replacing Savini as Sex Machine. Young Madison Davenport playing the teenage daughter I would say is arguably an improvement, but then Juliette Lewis was never a favorite of mine (aside from in Natural Born Killers).

Okay, now to the good stuff. Rodriguez was inspired to remake his vampire free-for-all in order to further delve into the Aztec and Mayan mythologies that he largely hinted at in the original film. The first season of From Dusk till Dawn: The Series is essentially a retelling of the events of the movie with the new cast, personal backstories told in flashbacks, new characters in the mix, and a new outcome. What begins as an almost note-for-note remake is something different by the end of the season. 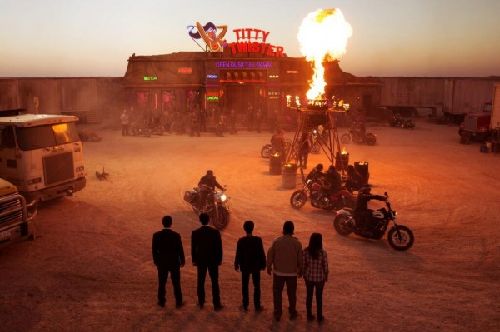 What, no “abandon all hope, ye who enter here” sign?

While the antagonists were originally straight-up vampires with demonic reptilian features, the new story greatly accentuates the serpent aspect, giving them viper fangs rather than the typical extended canine teeth. This makes for at least one shot that is incredibly unsettling so if you’ve got a serious fear of snakes, brace yourself. They are really more along the lines of shape-shifting snake demons -referred to as culebras- than traditional vampires; an ancient basis for the vampire myth rather than the literal thing.

As much as I enjoy the fleshing out of the original story, I do have to say that watching it play out over an entire television season as opposed to compressed into a single film really highlights for me what an impressive narrative QT and Rodriguez constructed originally. The film hauled ass and packed an immense amount of style, flair, story, and originality in its running time with very little exposition and never felt either rushed or drawn-out.

The show starts out right on the mark and often utilizes an excellent episode design that frames the present day narrative around relevant flashbacks, beginning in the past and then switching back and forth in time without ever feeling disjointed. Ironically, the narrative slows down quite a bit once all hell breaks loose and the Aztec temple filled with demons thirsting for the characters’ blood doesn’t feel as threatening as it should once the initial battle royale dies down. 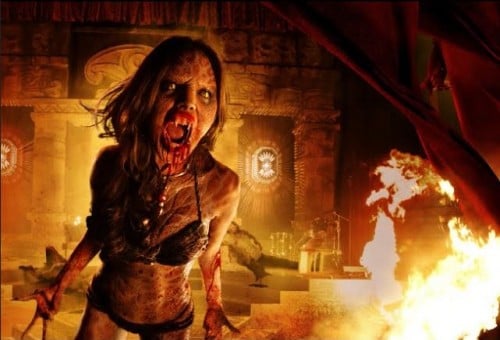 As long as she doesn’t turn into a spider, I’m still game.

There’s no real sense of tension as the cast pulls together to survive and gears up to try to make it to daylight. The story focuses instead on some uninspiring culebra politics, a series of visions testing the characters’ respective resolves, and Santanico’s courting of Richie. But since a lot of this is presumably done to set up possibilities for upcoming seasons, I can let it slide.

The first season of From Dusk till Dawn: The Series can be called a success for the most part. Given its clear budgetary limits, lack of story surprises, and absence of major star power it was never going to be more awesome than the movie was. Somehow it has a better Rotten Tomatoes/Metacritic ratings than the source material got, but I’m chalking that up to film critics being particularly stupid in the 90’s and the enduring cult success of the film giving the show a boost.

What I’m really excited for is to see where the show goes next. I have no earthly idea what Rodriguez has planned for the future here. It’s wide open. I doubt he’s going to adapt the straight-to-DVD sequels, and I’m sure we’re going to be following at least a few of the surviving characters, but the original story was so complete in and of itself that even with the added intrigue it’s hard to see how they’re going to perpetuate this story effectively.

But I seriously doubt that Rodriguez would have commissioned this as the flagship show for his new network without some pretty great ideas of where he wanted to go beyond the tale already told so I’m really looking forward to season two of this one. Retreading familiar ground with new faces, added backstory, and an open ending is all well and good, but the show’s real journey begins now. It can go anywhere from here and I can’t wait to see where.

Well, that certainly was… some sort of something. A werewolf episode, huh? Honestly, this was probably the episode from this season that did the least for me. It seems silly to accuse this show of…

Alright, so it’s an Unreality reader’s KID’S costume, as I don’t think she’s old enough to look at our fabulous cosplay galleries yet. But she’s well on her way to costume glory herself with this…

For years now I’ve been pushing this off. In an effort to enjoy my favorite currently airing show, Game of Thrones, I’ve so far avoided the source material completely. I really have wanted to stay…

I like a show that knows where it’s going, and unlike last season which I found a bit aimless, already in the second episode of Breaking Bad we’re starting to get an indication of…

I’m not sure where I stand on binge-watching.  Paul’s made some excellent points in the past, and there are pros and cons to both sides.  One of the things that does happen when you binge…