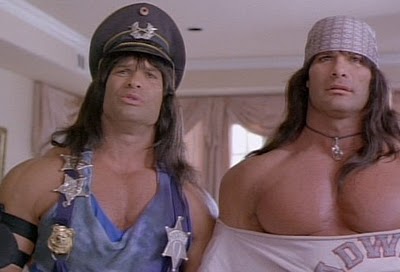 Before I even go on record here as recommending this movie I want to point out that Think Big is easily one of the dumbest movies of all time.   However, the real reason for this recommendation is to give a shout out to the Barbarian Brothers (Peter and David Paul).   If there was anyone back in the 80s that had even the slightest chance of being new Arnold’s it was probably these guys.

And you have to admit it, their size alone kind of made them funny.   Anyway, as dumb as expected, Think Big is about two somewhat retarded truckers hired to transport toxic waste across the country who get caught up with a teen genius who stows away on their truck.

Needless to say you can probably figure out the entire movie based on this sentence.   Those two being dumb.  The genius making fun of them but them ending up great friends in the end.   Who knows?  Who cares?  These guys are entertaining.

Trailer after the jump….

Wow, even the narrator sounds stupid.