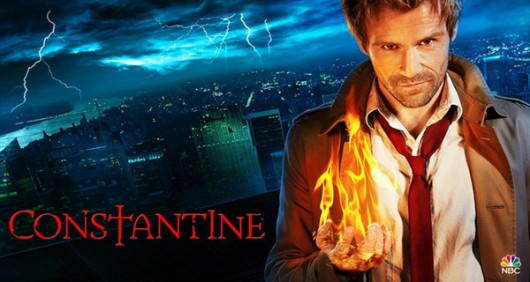 Comic book culture is on a major roll these days with an almost constant stream of films and television series making household names out of their characters. But let’s forget about movies and just look at TV. We’ve got The Flash, Arrow, The Walking Dead, Agents of SHIELD, Gotham, and no less than five new Marvel shows upcoming as Netflix originals. And that’s just live action series.

All of the shows I mentioned get discussed in an almost water cooler fashion amongst both nerds and mainstream viewers, but you know what? I’d take Constantine over all of them. It’s got the mythos, it’s got the source material, it’s got the perfect lead, it’s got a great mix of humor and grittiness, and it’s arguably got more potential at this point than every other comic-based show on the air. It was put together by David Goyer, the co-architect of the Dark Knight and Blade trilogies. That’s got to count for something (or at least 2/3 of something). Plus Neil Marshall directed the pilot. The talent is there.

No offense to the bigger names, but Arrow is often too steeped in joyless melodrama to completely capture the Emerald Archer’s essence while The Flash is visually impressive (if a bit saccharine) but there’s something annoying about a speedster that can’t dodge a punch. The Walking Dead typically exceeds expectations but is occasionally uneven and Gotham is cool, but I wonder how long it can last cruising on Penguin’s plotting while we wait for an apparently borderline-autistic Bruce Wayne to grow up. Meanwhile in the land of Marvel, SHIELD maintains its watchability, but only occasionally impresses and we’re all wondering how this Defenders thing on Netflix is going to fly. But Constantine is kicking ass right out of the gate and is the most true to the comic protagonist of any of these shows. And it’s a great protagonist.

A lot of you are probably thinking “Constantine? The Keanu Reeves guy?” Please excuse me while I spritz your face with a spray bottle of water and hiss “NO! Not Keanu Reeves! Keanu Reeves is NOT Constantine!” Don’t get me wrong, I didn’t hate the movie, but that was a truly heinous bit of casting. Not Affleck as Daredevil/Batman/ANYONE heinous, but heinous if for no other reason than John Constantine is absolutely nothing in the world if he is not extremely, defiantly, and terminally British. And he was designed after Sting. Yes, that Sting. Every little thing he does is magic, ya know? So no, he doesn’t really look like this: 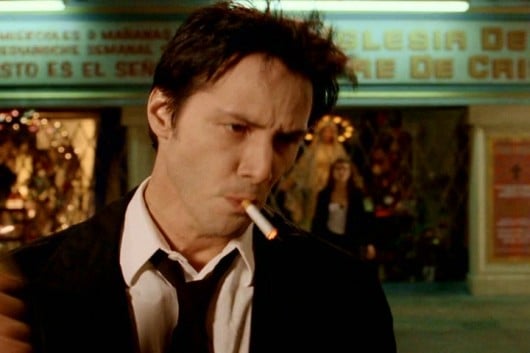 Well, they got the cigarette right, at least.

What this new version of the Hellblazer comic does first, foremost, and beyond what any current comic book show does is capture the essence of its protagonist, in this case Alan Moore’s creation, John Constantine. And Alan Moore is a mad genius so we need to be very appreciative of that. I add the “mad” part in reference to the fact that Moore claims to have met John in person on more than one occasion, among other things. The only element really missing from the new show is……you guessed it: cancer sticks. This is where we’re at with television standards now: you can portray any act of sex and violence so long as nobody smokes. Won’t somebody think of the children?

But let’s focus on the positive. What is so great about John Constantine, you ask? Well, for starters, he’s the epitome of the antihero. Not this “ooh, he smokes and say mean stuff when he kills people!” stuff. I mean, likable as he is, this guy is a nasty piece of work; a man damned to Hell on the rocky path to redemption who is constantly faced with nothing but bad choices, as is often the case when you traffic in demonology. Selling out your friends and having the ones you don’t sell out die horribly is standard procedure.

John’s brand of British snark, DGAF-flavored badassery, worldy cynicism, and willingness to do whatever he has to -morality be damned- make him the perfect protagonist for a darker series. And this series is dark, picking up right off the bat with John in the nuthouse after a failed exorcism led to a young girl being pulled down into Hell. Within four episodes, he’s already assaulted a radio station that’s broadcasting demonic tuneage while rocking Anarchy in the UK through his ear buds, confronted a gang of street hoods with fire in his hands, changed his business card from “master” of the dark arts to the more manageable “petty dabbler”, and manipulated a “hopeless” friend in the name of the greater good in a way that made even my thick skin crawl. The fun has just begun and I’m dying for more. 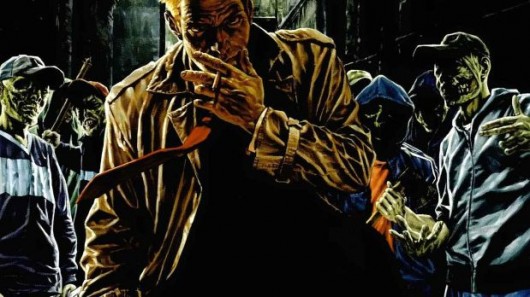 A beautiful day in the neighborhood.

When you consider the scope of Hellblazer’s mythos, this is a show that could go just about anywhere. Do anything. For instance, John had a part to play in Neil Gaiman’s legendary Sandman. How cool would it be to include that story in the show? Likely much cooler than whatever will end up onscreen in the proposed film adaptation of that comic, which we should all be dreading. Also, Swamp Thing, anyone? Does Zatanna have anything else lined up? How about a full-on Justice League Dark?

As a show, Constantine has shown remarkable judgment in the early going. The pilot’s featured female foil was a wide-eyed Liv Aberdine, who would have played the traditional role of needy audience surrogate constantly needing exposition and mostly there to look cute and help out like a good little girl. The second episode tossed this idea in the trash and replaced it with a cooler cliché in the form of Zed Martin, caustic up and coming psychic. She’s badass, she takes none of John’s shit, she has some really cool visions, and her room is full of pictures of things she drew from the Hellblazer comic which are either foreshadowing or blatant fanservice. Either one is good.

Lack of smoking aside, Constantine is shaping up to be a really great example of how to do a comic adaptation right. Whether it lives up to its possibilities we’ll have to wait and see, but I’m very much looking forward to spending some more time with DC’s nastiest supernatural detective and seeing where his adventures take him.