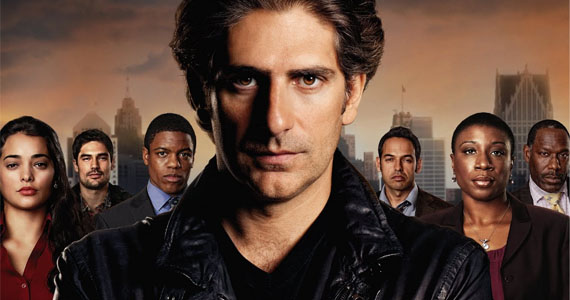 Yesterday, I brought you my first impressions of The Event, which I actually liked, a rarity for a new series these days. I watched that show on the recommendation that it was worth checking out, and today, I have the flipside of that. I heard that the Detroit 1-8-7 premiere was one of the worst pilots to debut on network TV in years, and for that reason I must check it out.

Well, I just finished watching it on ABC.com, and I absolutely have to concur. It is truly terrible, and I thank God it’s not on CBS so we don’t have to expect a nine-season run out of it.

I live in Detroit, so I thought I’d be able to appreciate this a bit more than the average viewer. And when I say I live in Detroit, I mean like everyone else who says they’re from Detroit,  I live in the suburbs outside of Detroit where our murder rate is 1000% less than that of the city itself. But I am very familiar with the downtown.

The city is no joke. In a given year, it’s usually fighting it out with Gary, Indiana and Flint, Michigan (what a state we have) as murder capital of the country. Therefore, I highly doubt that the police force is the jovial bunch of miscreants we see in this show, who are constantly joking around and saying clever little quips despite drowning in dead bodies. Detroit is not the setting for a show like this, and the tone is just way, way off. 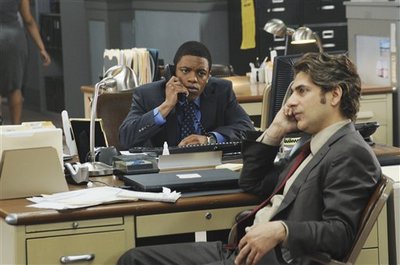 Fitch calls his new partner, even though he’s sitting right next to him. Hilarity! This happens more than once…

The thing is shot like Southland, as in, there’s a guy holding a camera following everyone around all the time, pretending like he’s filming COPS. This works great in Southland, but copying that here does not producer similar results.

The show is just horribly written, and no one better exemplifies this than Michael Imperioli’s character, Fitch. He’s had 10 years on the job, and has evolved into some sort of cop savant. His crime solving methods are supposed to be ballsy and brilliant, but in reality, if this show were based in any kind of reality, are idiotic and dangerous.

He executes not one, but two ridiculous occurrences of crime fighting that would never, ever happen in the real world. First, he makes a subject confess to a crime by sitting in a room and staring at him silently for hours. Next, he walks into a house where a man is holding his family hostage with a shotgun, and gives some Oprah advice about “we all feel pain” and talks the guy out of killing everyone (despite the fact he’s already killed four other people). These moments are supposed to make you say “oh man, this guy is a badass” but rather it comes out “oh man, this guy is a f*cking idiot.”

The rest of the show is populated with idiotic, one dimensional characters that I couldn’t care less to see develop. There’s old black cop, young black cop, middle-eastern cop, latina cop, handsome white cop and black lady chief. I’m surprised they didn’t manage to get any Asians in there.

In TV landscape that generally loves cop shows, you have to distinguish yourself from the pack. The only way Detroit 1-8-7 does this is by having a cumbersome title and by being way, way worse than any of its competitors, but unfortunately, that’s not the kind of distinction that will earn you more than a handful of episodes on the air.