When you think The CW you don’t really think critically adored and award winning dramas do you? Up until recently the target audience for most of it’s programming was females in their teens and early 20s, upon it’s launch the networks flagship program was Gossip Girl and it was accompanied by the likes of 90210, Melrose Place and The Carrie Diaries. Some of the only shows that weren’t teen fan fare and garnered some acclaim were what was left over from UPN and The WB, but in the past couple of years the network has turned a corner and has put out some quality programming which we can probably thank the new president Mark Pedowitz for. In just a few short years the network seems to have come quite far which is evidence by two Golden Globe nominations for its freshman show Jane the Virgin.

I remember a few years ago when Gossip Girl attempted to campaign for Golden Globe nominations and the snippets I saw of the campaign were quite embarrassing, I find it hard to believe that anyone could take it seriously. Gossip Girl was just a run of the mill teen drama that thought it was bigger than it was, and I doubt that it made the critics look favorably upon the network as a whole. I’m not saying that all the programming was bad, I’m a huge fan of Supernatural, Veronica Mars, Nikita, Ringer and probably \more that I can’t remember right now but the likes of Gossip Girl were what represented the network, and the show was pretty poor. I’m sure all the other networks looked upon The CW as an embarrassing little sister that was trying to get in on the limelight, and they went almost completely ignored. I didn’t actually think that there would be a possibility that any of their programming would be up for any major awards for at least a good few years so I was surprised when the Golden Globe nominations for 2015 were announced and Jane the Virgin was on the ballot for best Comedy/Musical and best actress in a Comedy/Musical. 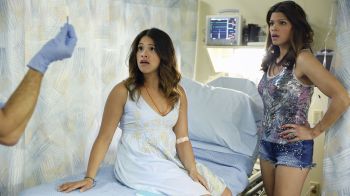 I watch some CW programming and in all honesty I’ve been embarrassed to admit to it, I usually just specify the shows I follow rather than say I am a CW viewer. In my eyes indulging in it was a guilty pleasure, it didn’t matter that the quality of the programs I watched were high, it was just that it was The CW. In recent years I have avoided picking up any new shows on there but when the nominations were announced I had to give Jane the Virgin a try so I watched the first two episodes and I regret not watching it sooner. With Jane the Virgin The CW has shown that it has completely broken away from the mould that it has built itself since its launch and Jane isn’t just refreshing for the network but it’s refreshing for the network as a whole. Firstly the cast don’t look like they just walked off of an Abercrombie spread, sure some of them are prettier than your average person but they aren’t the supermodels that we’ve grown use to seeing on the network. The cast of Gossip Girl, 90210 and the rest could probably be replaced by cardboard cutouts and we wouldn’t notice, in Jane the Virgin they can not only convey emotion but they can do it incredibly well. I’ve only watched two episodes and even Petra who is the most unlikable character for me is multifaceted and I can’t hate her completely so well done to the casting department!

I’d also like to mention that it’s nice to see an array of ethnicity amongst the cast, the casting we usually see on The CW usually tends to stick to primarily white actors with one or two black/asian/latina. I’m not accusing the network of any wrongdoing, we see it all the time on various other networks so I’m just saying it’s a nice change to have other ethnicities being represented. In Jane the cast is mainly Latino and that enables the show to bring in some aspects of the telenovela which makes it stand out from it’s peers, and I think probably had a hand in the show being nominated. It reminds me a little of Ugly Betty although I think that it may exceed it as not all the characters are caricatures, sure it’s soapy and we have to suspend disbelief on occasion but it seems a lot more realistic. The characters are multifaceted and I genuinely care about what happens to them, and look forward to watching the remaining 6 episodes that have aired.

Jane the Virgin has given me faith in The CW and I think that I can stop being embarrassed by it. I can stop saying “I watch Supernatural, Arrow and The Flash” and proudly says “I watch The CW” and I honestly thought it would be years before I could say that. I know that it’s only a couple of nominations, it only has a 1 in 5 chance of winning the awards but the nominations alone are a big step. With Jane the Virgin The CW has taken a major step in becoming a serious and competitive network and it makes me want to try out their other current offerings. How is Reign?