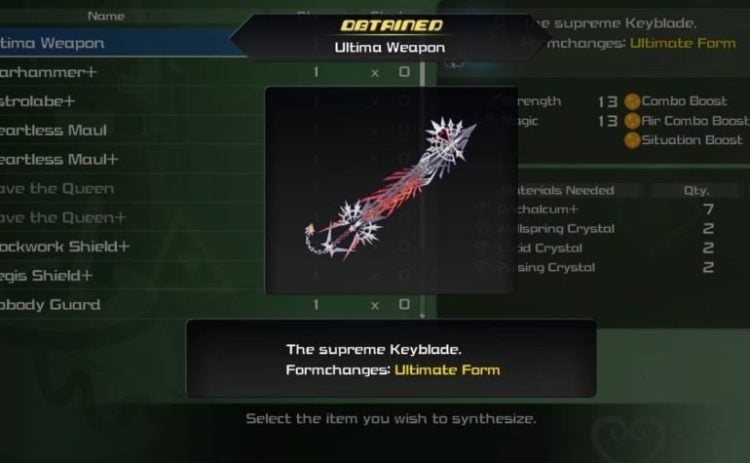 In Square Enix’s Kingdom of Hearts III, you play as Sora, a character emboldened with strength, vitality, integrity, and a high level of respect and appreciation for his travel companions. As a Keyblade wielder,Sora shares his time with two classic Disney characters, Donald and Goofy, In a quest to find King Mickey. He and his friends, Riku and Kairi originally hailed from the Destiny Islands, but the desire to seek out the unknown, to know that awaited them beyond their home overtook them, and they began their journeys, which have brought them to this point. When we meet Sora again in Kingdom of Hearts III we find that he’s grown a bit, and ready to find the seven Guardians of Light. If he and his companions fail, they risk the wrath of the terrible Xehanort and his desire to start another Keyblade War.

Just What is the Ultima Weapon?

In Kingdom of Hearts III, keyblades are weapons which can only be handled by those with a brave and compassionate heart, like Sora. There are a total of 14 keyblades present in the game, but none as prized as the Ultima. As a player you can equip up to three keyblades at a time and cycle through them during combat. However, as much as you’d wish to obtain the Ultima early on in the game, you’ll not be able to until the end. Not only that, but crafting or synthesizing it is no easy task, as we’ll soon see. As for specs, the Ultima Weapon comes with 13 Strength and 13 Magic. It also can do a formchange into the Ultimate Form where you can teleport among others. There are four other abilities which when played, deal extensive damage during combat:

How to Obtain the Ultima

To get your hands on the Ultima, you’ll first have to unlock its recipe. To unlock this most harrowing and magical weapon for Sora, you’ll first need to gather 4 items called Synthesis Materials in various amounts, and craft them in the Moogle Shop. To get these Synthesis Materials, you’ll be required to defeat bosses, enemies, as well as open a couple treasure chests. .

By now, you are getting a pretty good idea of why the Ultima is so prized, and also how difficult it is to farm the materials necessary to craft it. First, know that the game is set up so you can obtain your Synthesis Materials during your travels. To help you out, we’ve giving you a list of required materials. As you can see, there are 4 major materials in varying amounts, which add up to a grand total of 58 ingredients. Whether it’s Orichalcum+ or Lucid Crystals, we have everything you’ll need, right here to get it right. We’ll go over each of the four materials below, as well as provide you with their locations.

Visiting the Moogle Shop and playing its lottery is one of the easiest, but most annoying ways, to farm your first Orichalcum+. When you visit the shop and purchase something you may get a Prize Postcard. When you do, visit Twilight Town and send it via the postbox, which leads to you getting something in return, and one just might be an Orichalcum+. So, that means you’ll just have to keep purchasing and sending, and hope for the best, which is exactly why many players consider it annoying.

Not all such attempts are that annoying. Take Exile Island for instance. Just head toward the Caribbean, find Exile Island and locate the treasure chest in the center of the Isle. Open it and find some Orichalcum+!

Find your way to the Keyblade Graveyard in the Badlands. Locate the pinkish-red portal to enter the Final World. Here, you’ll find another treasure chest which houses the Orichalcum+ you need.

When in Arendelle, Play Frozen Slider

When you play Frozen Slider, you’ll be smashing down the side of the North Mountain on Goofy’s shield. Here, you’ll collect valuable points, but you also need to be on the lookout for the 10 treasures which are scattered throughout the course for your Orichalcum+.

During your travels, you’ll have access to 90 lucky emblems, also called ‘Mickeys’ by some players. Look closely, because you’ll need all 90 to get one Orichalcum+. We know that 90 is quite a lot to consider, so you can find each and every one’s location, right here.

When you enter the Eclipse Galaxy, you’ll find a huge structure surrounded by 5 baddies to beat. But that’s only the beginning. When you beat the baddies, the Omega Space Ship will spawn, and this is the big boss you have to beat. After a tough skirmish, you get your well-deserved Orichalcum+

Flans are mini games. Whenever you finish one of Kingdom of Hearts III main worlds, you’ll get access to one of these mini games. In order to get a trophy, you must play each of the 7, or as we like to say, “Flantastic Seven”. However, trophies are not enough for an Orichalcum+. Instead, you have to beat the score threshold for each game to get the last Orichalcum+.

Remember that you can only obtain the Ultima after the main story has played out. So, once you’ve beaten the story, the Battlegates on all worlds will be open for business. Here, the one you are interested in is Battlegate 12, this one can be found in the Northern district save point of San Fransokyo. Enter the Battlegate and crush the enemies before you, and get your Wellspring Crystals. Enemies in San Fransokyo which are known to drop Wellspring Crystals are Air Soldier, Tireblade, Soldiers, Neo Shadows, Shadows and Pago Shovels. Know that a few players online have claimed to get Wellspring Crystals by engaging in combat with enemies on the Island of Luck, especially by using Sora’s Lucky Strike ability.

To get your Lucid Crystals, you’ll have to visit the Caribbean to the Isle of Luck. Once there, you’ll come across three Anchor Raiders which need to be eliminated. Next, head back to your ship. Lucid Crystals can also be Synthesized in the Moogle Shop. To do this you’ll need the following recipe:

You can also synthesize these at the Moogle Shop. Here is the recipe:

There you go, you’ve successfully farmed all of the 58 ingredients necessary to craft or synthesize your Ultima Weapon. Just like the other keyblades, once you’ve obtained your supplies, it’s time to head over to the Moogle Shop and forge your Ultima. To do this, simply travel to a shop, select “Workshop” and then “Keyblade Forge”. that’s it! You’ve successfully crafted your Ultima. This is the most powerful melee weapon in the game as it’s able to hack and slash both secret and final boses. While it doesn’t require upgrading, some players have found using magic spells, such as the Wisdom Ring and Mickey’s Brooch will increase it’s damage, But don’t stop there, after you’ve completed the game you can use your Ultima Weapon to do battle with the remaining battle gates, destroy the hidden boss, Dark Inferno, complete photo missions and more, 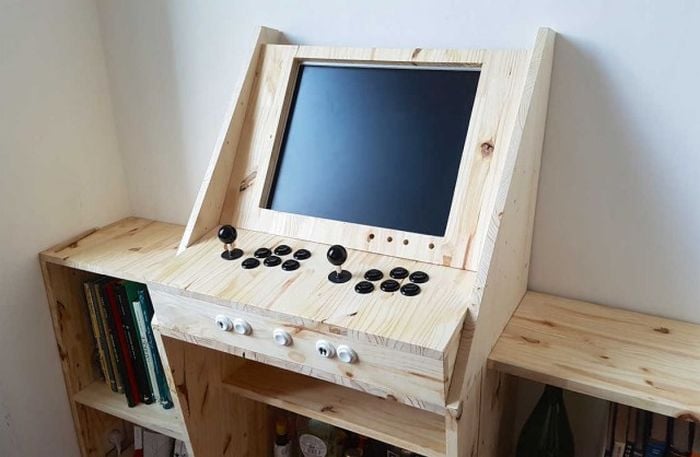