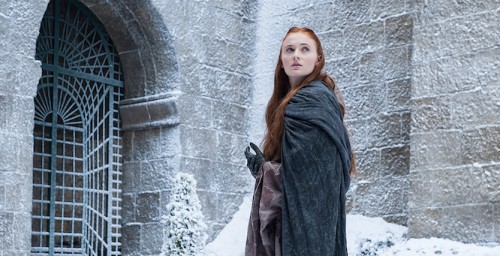 Though Game of Thrones has appeared to slow down a bit this season after the tumultuous Purple Wedding, it’s still producing fantastic episodes. It’s hard to top the incredible ending of Tyrion’s trial from last week, but “Mockingbird” certainly did its best with yet another (relatively) major character offing.

We’ll start with that, as there’s not really any point in dancing around the most eventful moment of the evening.

In a single, length sequence as the Eyrie, things escalate quickly as Sansa slaps idiot-child Robin, gets kissed by Petyr Baelish and watches him throw her aunt out the moon door after professing he only loved one woman, her sister.

I think absolutely no one was sad to see Lysa go, as even in her limited scenes her crazy was off the charts as of late. This was obviously Petyr’s plan all along, and now he alone is Lord of the Vale. Will he try to marry Sansa to lay claim to the north as well? Or does he do that by proxy by marrying her off to Robin instead, and still being able to pull her strings?

I’m wondering if Baelish planned that kiss in that place, at that time. The guy doesn’t improvise, and never does anything without thinking eight chess moves ahead. I have to believe he knew Lysa would see that kiss, and it would throw her into a fit, but I’m less sure if he actually has feelings for Sansa, or if she’s just another pawn.

Now the question becomes how he can explain how his wife just happened to tumble through the moon door. Sansa is the only witness, but…what exactly do you say there? It’s not like people don’t know Baelish is power hungry, after all, so he better have a damn good story. 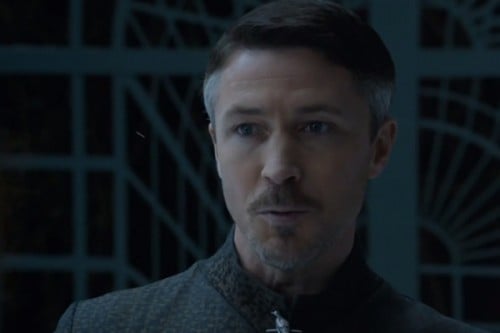 Outside of the plot itself, I have to ask, in a show full of powerful performances, does anyone else think that Aiden Gillen is laying it on a bit thick in recent episodes? I don’t know why, but this season, he seems to be overdoing it with his annunciation and whatever accent he’s supposed to have. It just comes across as a bit overwrought. I love the character, but the performance has been off-key for me lately. Maybe I’m alone in that.

We went briefly up to the wall to check in with Jon Snow and his failed quest to get the old Crows to understand how massive the wilding threat is. They won’t listen to him, but something tells me when giants are beating down their gates, they may regret that. Are they seriously still talking about ranging parties when there are thousands of wildlings about to attack them? Come on.

Dany agrees to let Daario sleep with her, while simultaneously avoiding any actual nudity herself which I have to believe has been inserted into her contract for this season. The best part of the evening wasn’t Daario’s ass, but the fact that Jorah finally gets to be useful again convincing Dany that being ruthless isn’t the way to make friends, and is really just a shortcut to becoming the type of villain she hates. She agrees to at least give the masters in Yunkai a choice to submit, but her quest to end all slavery seems to be a rather lofty goal no matter what tactics she uses. 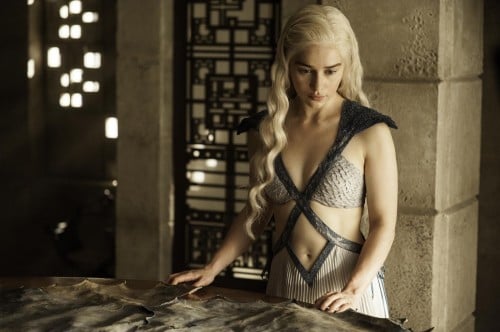 Arya and the Hound encounter even more of Arya’s old enemies (what luck!), this time a guy who threatened to rape her back when she first met her Faceless friend. She pokes him with Needle, but the Hound takes a rather savage bite to his neck and now has a rather nasty looking wound. Surely he’s seen worse, but we’ve also seen the mighty Khal Drogo felled by a single cut, and the Hound is refusing proper fire-based medical attention, so who knows. Also, that’s the first time we’ve seen him out of armor like, ever, I believe.

Once again Tyrion manages to steal the show with a pair of rather fantastic scenes in the wake of his trial. At first when Bronn came in wearing new clothes, the immediate and obvious thought was “oh shit, betrayed again.” And while yes, Cersei did totally bribe him, it’s not really the same sort of betrayal as what happened with Shae. Bronn explained his case well. He has gold, a wife, a possible future title. Yes, Tyrion is his pal, but he has almost no chance of beating the invincible Mountain (reintroduced as the biggest, scariest man alive this week), so why would he risk it? The best line of the night was Bronn’s, “Yes, you’re my friend, but when have you ever risked your life for mine?” On that note, he and Tyrion can part on good terms. I do worry that we won’t see him for quite a while now though.

I’m honestly surprised Tyrion didn’t think to recruit Oberyn Martell himself. I suppose it worked better dramatically to have his services offered as a surprise (the look on Tyrion’s face when he realizes why Martell is there is heart-wrenching), though he did know the man’s history with the Mountain. Of course Martell would love the chance to kill the Mountain, spite Tywin and Cersei Lannister, and live to continue to try and destroy the family. But the question is, can he?

We’ll in next week’s “The  Mountain and The Viper.”

– Lysa being flung out the moon door seemed a bit rushed to me. That was a much better slow burn in the books, and I think there were only three scenes total between Petyr and Sansa arriving at the Vale, and Lysa being killed. That just moved REALLY quickly, and it seems like it’s going to have to slow the hell down now as nothing all that major happens in the Vale now for the rest of the books.

– Previously, Petyr got to blame a musician for her death, but this time that hasn’t really been set up at all. What story is he going to concoct for the show? The pieces didn’t really seem set up ahead of time given how quickly this happened.

– I genuinely don’t remember Melisandre needing Stannis’ daughter for anything in the books. Did that happen? If so, what’s going on there?

– So that’s the wound that “kills” the Hound then? But there are hints he survives, and has simply given up his marauding ways. I expect we haven’t seen the last of him in the books.

– I’m starting to get genuinely concerned about moving into the next two books after this season. The timelines are going to be tough to combine, and I wonder if plotlines like Dorne and the Iron Islands are going to be cut completely (carving out a good bit of backstory) or left in (and creating a fair bit of boredom).

At some point I figure somebody held or will hold a contest for who could come up with the most unoriginal article idea and I intend on winning that sucker in spirit this week. If…

I keep hearing that a Voltron movie is on the horizon, but I’m half convinced they just converted it into Pacific Rim and called it a day. But perhaps a real movie will come someday,…

I’ve given up on SyFy shows for quite sometime now even before the whole Sharknado craze. I wasn’t too keen about the whole idea of Z Nation when word first broke out. It was immediately thrown to the “pass”…

Did you think I was done writing Lost posts forever now that the show’s wrapped? Well hah! I’m springing one more on you for old time’s sake, but I promise it’s a good one. An…

Happy Birthday Rob Lowe, you turned 50 on Monday.  You seemed to have been birthed in a wellspring of youth.  I was quite obsessed with Rob during his West Wing years playing Sam Seaborn; a…