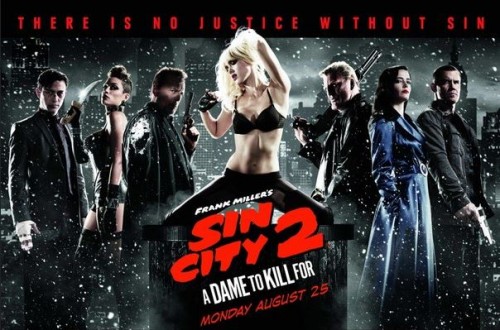 They finally went and did it. After almost ten years of waiting, they’ve followed up on the best pure comic adaptation of all time and released a sequel to Sin City. Naturally, this has put me in a Frank Miller kind of mood, so this week I’m going to discuss one of the most polarizing figures in the comic book industry; a true legend who at some point completely lost their shit and became almost universally reviled. But did he get it together enough to bring his comic world to life again as convincingly as he did before? Behold the rise and precipitous fall of a true legend first and then we’ll revisit that question.

I don’t think any single figure is as responsible for my return to comics as an adult than Miller is. I bought The Dark Knight Returns as an exploratory purchase a decade or so ago and that was it. I needed more Batman, I needed more comics, and I needed more Miller. He was just one of the most engaging writer/artists of any medium I’d ever come across, but at some point he just became terrible. So what the hell happened to cause this descent into cartoonish madness?

Since most of his works have been discussed to death, I’ll make his rundown of comic credentials quick. He’s responsible for the Dark Knight’s most iconic origin story in Batman: Year One as well as his legendary comeback in The Dark Knight Returns, his run on Daredevil put the character on the map, his was the art that launched Wolverine as a solo act in the 80’s, and he created 300 and Sin City in the 90’s. This who’s who highlight reel of classic comics represents around twenty years of sustained win. 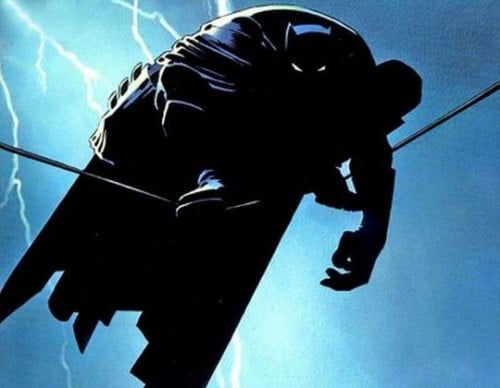 Then just like that, the rope snapped. Post-90’s Frank Miller was not the visionary artist we once knew. He was working on an ill-advised sequel the The Dark Knight Returns when terrorists destroyed the World Trade Center, and that might as well serve as the metaphor for the integrity of Frank Miller’s work, because the timing is dead on.

I’d always made allowances for his brand of gritty exploitation as over-the-top adolescent fantasies as being just that: a contrast of the immature and the mature. Sin City in particular was all about male power fever dreams with a noir caricature sheen and ridiculous sex and violence, but it maintained an air of absolutely compelling storytelling and some of the finest black and white art ever put in pages.

But at some point, Miller’s work tipped the scale hard from gritty and entertaining to just plain misanthropic and angry. And not just in the dark storytelling sense. It was like he was trolling the entire industry, daring us not to read any more. He was always a prime offender when it came to objectifying women; practically refusing to draw attractive female characters unless they were nude or close to it in most of his works, but it went with the adolescent fantasy motif; big violence and big sex.

When you take a character like Wonder Woman who serves as a modern feminist icon/avatar of compassionate strength and make her into some angry misandrist having hate-sex with Superman because she still need the D , you’re going to piss people off. Wonder Woman is not and has never been some trenchcoat-wearing noir cliché and I don’t think that is something anybody wanted to see. So why even do it? Why do this? 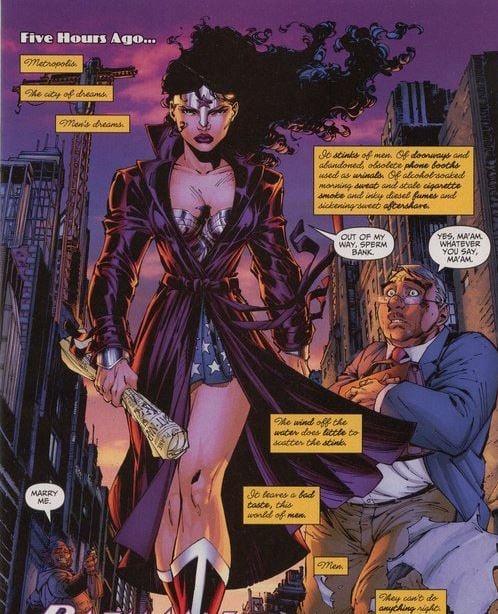 It’s a little scary to picture someone writing those lines with a straight face.

While the quality his work had taken a bizarre turn for the worse and began bordering on parody, the man himself often became irate and hateful as well. A few years back, Miller came unhinged when discussing the Occupy movement, referring to people protesting the exploitative corporate practices that are shredding our economy like so: “Occupy is nothing but a pack of louts, thieves, and rapists, an unruly mob, fed by Woodstock-era nostalgia and putrid false righteousness. These clowns can do nothing but harm America.” This from the man whose most iconic comic scene was Batman confronting Gotham’s wealthy ruling class to tell them “you’ve eaten Gotham’s wealth; its spirit. Your feast is nearly over. From this moment on…none of you are safe.” How is this the same guy?

He spent a lot of time combating corporate censorship and artists’ rights and wrote a Sin City story supporting gay rights in his 90’s heyday, but his more fascistic side started emerging in 300. Now the guy practically comes off as a FOX news caricature. Need more examples? Well, there’s Holy Terror. The original concept was a Batman comic dedicated to the Caped Crusader living up to his nickname and declaring war on Islam. And yes, it was to be unironically called Holy Terror, Batman! Things like this is why I sometimes think Frank Miller is pulling all of our legs. But at this point the act has been sustained so long it’s hard not to admit he’s insane.

Anyways, DC likely wanted no part of this political shitstorm and Miller took his latest elsewhere, creating the Fixer as his Batman stand-in to take on Al Qaeda. Miller himself, possibly after binging on Toby Keith music and O’Reilly Factor episodes for a few weeks straight, declared his intentions regarding Islam: “for the first time in my life I know how it feels to face an existential menace. They want us to die. All of a sudden I realize what my parents were talking about all those years. Patriotism, I now believe, isn’t some sentimental, old conceit. It’s self-preservation.” 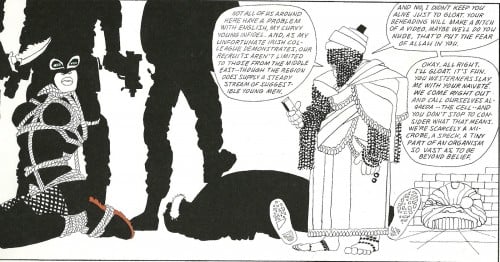 The amount of naivety the man portrays is scary. Did the 2001 realization that there are hurtful people in the world literally break his genius brain? Is shooting and bombing people and other everyday terrorism better than crashing a plane into a building? Miller, evil does not have a race or religion, and we’ve literally spent over a decade slaughtering people in their homes in countries utterly unaffiliated with Al Quaeda by the million to avenge the loss of two buildings and a couple thousand people to a small group of fanatics in a region we’ve been exploiting and abusing for decades. Shit happens. Grow up. I’m starting to think all those swastikas littering your good comics back in the day were trying to tell me something all along.

Another opportunity to speculate on what’s been going on the inside Miller’s head was his solo directing debut –he’d previously co-directed Sin City with Robert Rodriguez- The Spirit. This was the film that got me thinking he was just messing with us. I actually enjoyed it, but I would never suggest that the film is what we call “good”. At best, it’s so bad it’s good. Between the Samuel L. Jackson cosplay spectacular, the bumbling dialogue, the too-vampish ladies, and the head-on-a-foot hopping around, it must have been meant to be a comedy. I mean, what’s the alternative? But with Frank, the line between parody and serious is paper-thin and he doesn’t always seem to be able to see it. But given his insane media rants, at this point I’ve decided he’s just flat-out lost it.

The man gave us some of the greatest comics of all time; stories about people fighting for survival against the powers that be and taking on corruption wherever they found it, even if it meant taking on challenges way out of their league and dying out of pure spite. That Frank Miller was a brilliant man.

This neo-fascist joker we’ve been dealing with for the last thirteen years or so who’s spent so much time and energy destroying his legacy of quality that people have literally begun to question whether he was ever worth a damn in the first place? I don’t know who he is. A Kaufman-esque prankster? Maybe. A Nugentian entertainer/political troll? Eh. Or maybe he really is just a bitter old man who’s lost his way. Whatever he’s doing, I feel like he cheated me out of a lot of great stories he could have been writing instead of this humorless satire we’ve been getting.

I was really concerned when I heard that Miller would be writing all-new material for the new Sin City film. The comics are all pristine in my view, but they were written by a different man from where I’m sitting. Well, I’m pleased to say that Miller did not, in fact, ruin A Dame to Kill For. I might think that the new stuff was really unnecessary, not as great as the classic material, and made the movie’s narrative flow seem off, but the sequel I’ve waited so long to see was still enjoyable and far from the disaster I feared so why complain?

Frank Miller may have been putting out garbage for a good while now, but his latest work in film shows that he is still at least a little bit capable of channeling -if not completely living up to- the man who captured my imagination as a fledgling comic nerd looking for fiction that artfully melded mature themes and content with childish glee, engaging art, and quality storytelling . Come back to us, man. We’ve missed you.