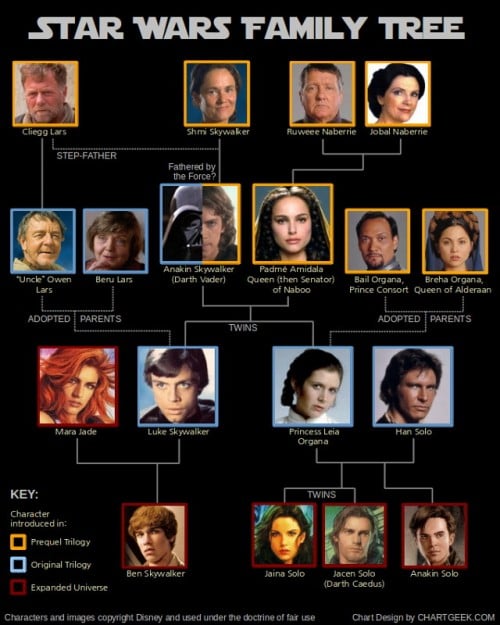 If you’re reading this site, chances are you could have probably written this chart yourself, but some people may indeed have trouble keeping the families of Star Wars straight. The expanded universe in particular is somewhere that might lose people and though I’ve read a handful of the books, I’ve forgotten about the children the Solos and Skywalkers.

Of course, what everyone wants to know is what role the expanded universe will play in the new Star Wars films. Will we really see expanded universe stories brought to life onscreen? Will we see three Solo kids and a Mara Jade romance? I’m not sure, though I can’t say I’m entirely opposed.

While I don’t think JJ Abrams should use any specific books as a script, I don’t think that using a few of the expanded universe characters is the worst idea I’ve heard. When we’re hearing rumors that the original cast will appear as older versions of themselves, I have to imagine that they will indeed have children who would be the stars of the show.

What do you think? Should Abrams ditch or embrace the expanded universe?

We’ve featured a number of wicked cakes on the site here before, but this has to be my favorite. It’s a Kill Bill-themed pastry that cake master Barbarann Garrard made for her daughter’s birthday. I really…

Filmmaking is visual trickery. When you have two hours to introduce characters, get them in trouble, and have them get back out of trouble, every second counts. The easy way to introduce a character who’s good…

Well, it’s been in the works for a while now, but things have been up and running long enough where I thought it was finally time to let you all know the news. As a…

I can’t say exactly when that first picture was taken, but judging by the way everyone looks, I’d say somewhere decently close to 1990, making this a 20 year age gap between the pictures. I…