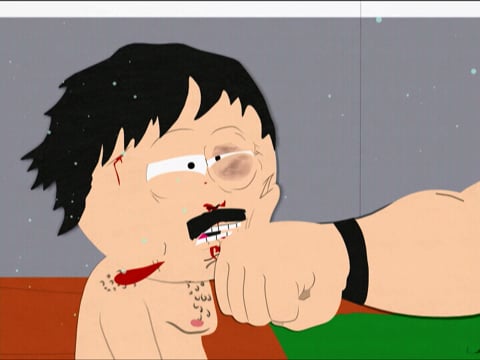 Call it a Rocky spoof. Call it a lament against the pains of Little League baseball. I call it the best episode in South Park history. Faced with an extended season, the South Park little league baseball team cannot seem to stop winning. Meanwhile, Randy Marsh faces his toughest test as a drunk dad fighting in the stands: the Bat Dad. In the scenes leading up to his big speech, Randy has fought his way through a slew of drunken parental foes (montage-style to the song “You’re the Best”, no less). But the Bat Dad, a mammoth caped man obsessed with his Denver squad, has Randy scared he might not have what he takes.

He confesses his fears to his wife Sharon, who tells him perhaps he should just not drink and go support his son. The ensuing climatic fight, with Randy entering late in the game with a tray of beers declaring “Let’s go South Park.” An epic fight ensues, and Randy goes down. Inspired by delusions of his wife and the coach from Rocky, Randy rises, stating “I didn’t hear a bell.” I almost can’t summarize this scene to someone without laughing. Randy’s complete and utter disconnect from the world is his defining character trait, and final fight is beautiful to behold. 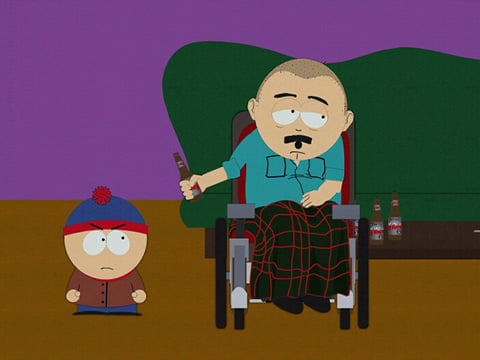 South Park has taken on some significant groups. The show has blasted Mormons, Scientology, and the media’s portrayal of Islam. But in “Bloody Mary,” they waged perhaps their most controversial war: attacking Alcoholics Anonymous. Randy uses his new knowledge that alcoholism is a disease beyond his control to relegate himself to a wheelchair, where he sucks down beers and laments his lot in life. At one point, he goes to visit a “sacred” statue of the Virgin Mary so that he may be granted freedom from his ailments.

I think “Bloody Mary” was a significant chapter for South Park because it committed to its premise without apology. One thing the show has always held true to is its label as an equal-opportunity offender. South Park earned the right to pick a fight with AA by battling so many smaller foes in earlier seasons. Of course, the episode is also another chapter in the legacy of Randy Marsh. His selfishness as a human and hilarity as a character continue to grow in “Bloody Mary.” 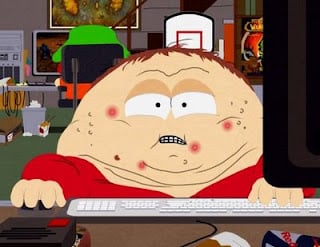 We’ve talked a lot about South Park for it’s higher-brow qualities, but part of the show is about how low it can go too. Case in point: the scene where Cartman takes a bathroom break during an epic session of World of Warcraft. It is, shall we say, graphic. Cartman is too busy to leave his computer, so he yells for his mother, who comes in with a bedpan. Cartman’s aim is less than perfect, and the scene is excruciatingly funny. South Park has always prided itself on keeping a consistent level of bathroom humor in their content. The scene is entirely unnecessary, but it’s the most memorable part of a great episode.

“Make Love, Not Warcraft” features scenes done in the style of the Warcraft game. In a sense, doing the bathroom scene provides a crude counterpoint to the technologically-advanced parts. Almost like Trey Parker and Matt Stone are giving a wink to viewers that says they know they’re doing something weird with the computer graphics, but don’t worry, because Cartman defecates on his mom too.

9. Gerald Broflovski Turns Into a Hobo (S11E7 – “Night of the Living Homeless”) 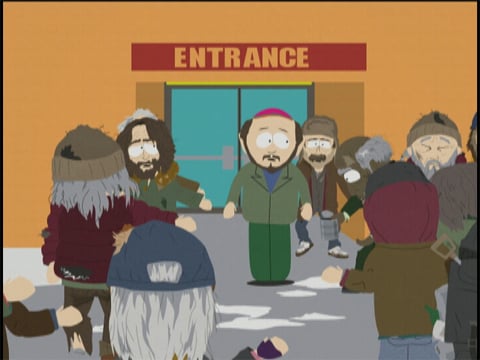 I used to live in Santa Cruz, CA. For those who’ve never had the pleasure, Santa Cruz is a beach town riddled with vagrants. I don’t say this to be unkind; it’s simply the way it is. Walking downtown, one couldn’t get a single block without being hit up for change. God forbid you light a cigarette. When my Santa Cruz brethren and I sat down to watch “Night of the Living Homeless,” we were convinced the show was based on our town. The premise is an homage to Dawn of the Dead, with poor people stepping in for zombies. In a pivotal scene, Kyle’s dad Gerald forges into the fray, where he finds himself without his wallet. Suddenly, he realizes he’ll need to take the bus, which requires….change!

This pick might be a bit biased, but the way the episode perfectly warps the Dawn of the Dead plot into something offensive and relevant is pretty impressive. Randy Marsh is great as the guy ready to put a bullet into anyone who appears to have “turned.” The episode is a departure from the more in-the-moment episodes South Park has adopted as its bread and butter, and yet it functions as a contemporary take on the issue of American poverty. Plus Randy with a shotgun. 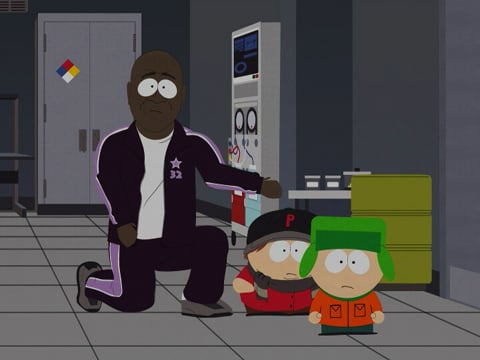 Allow me to cheat a little on this one. “Tonsil Trouble” may not be a perfect episode, but it has three incredible moments. The first is when Jimmy Buffet sings Cartman a song entitled “AIDS Burger in Paradise.” The song is the epitome of stupid, but if I say it to any of my friends, they go catatonic from laughter for several moments. Moment two is Cartman asking Kyle, “Are you sure? Are you HIV positive?” Incredibly offensive yet, but also so stupid you kind of laugh out of default. The third is the cure to HIV discovered by Cartman, Kyle and Magic Johnson. Apparently all you have to do is get a direct infusion of cash straight into your veins. The obvious metaphor, that those with money are much better fighting HIV than those without, is delivered in typically abstract but astute fashion.

“Tonsil Trouble” is a excellent endcap to my summary of South Park moments. It has terrifically terrible aspects to it, but it also hits home with a message about the true state of health care. One may not turn on South Park to learn anything, but it’s hard not to something out of most episodes. Honestly, for all the awards and accolades South Park has received, I’m surprised they haven’t earned more. What other show so aptly toes the line between “I would never show that to my parents” and “This show is smarter than to my parents.” Here’s to more memorable moments to come.

Ok, what did I miss?

This isn’t the first TARDIS dress I’ve ever seen, but it’s certainly the coolest. Worn by Sasha Trabane, painted by Andy Coyle and photographed by Nenita Hiller, the dress shows the blue box on the outside with the enormity…

(click to enlarge) Justin White is an exceptionally talented artist with a  show that happened this past Friday. In it, he displayed a series of animated pieces showing “G-Rated” versions of infamously violent or crude…

I’m not sure what percentage of you actually keep up with The Office any more, as it’s in what, its eighth season now? Insanity. I doubt there are many loyalists like myself who have managed…

After a week off due to the Fourth of July weekend, True Blood returned with more vampire and werewolf action.  When we last left off, Sookie was looking for Bill in Mississippi with the help…

As usual, the last year of Cartoon Network’s Adult Swim block didn’t pass without controversy. Given the lengthy gaps between seasons for Aaron Mcgruder’s suicidally-offensive animated racial satire The Boondocks, any new season has been…

From artist Matt Reedy comes a series of “Golden Books” turning adult animes into kid-friendly picture books. Attack on Titan is my favorite (because it’s the only one I’ve seen), but there’s Fooly Cooly and…