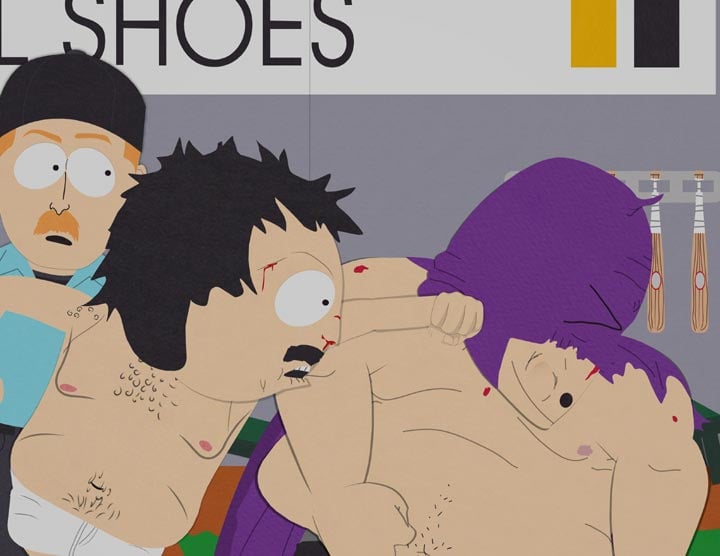 Every generation is defined by certain pop culture phenomena. In the 1930s and 1940s, there was the Jack Benny radio program. In the early 1970s, we had The Brady Bunch. For Generation Y, there is South Park.

South Park has grown with its viewers. Starting life as an attempt to televise the crudest, most offensive content possible, the show has evolved to take in what happens in the world and spit it back in a distorted, often hilarious fashion. Everything from scientology to Obama’s election to Pokemon have been skewered at the hands of Trey Parker and Matt Stone. The timelines of more recent episodes reflects the fact that each show is made, from inception to air date, in about six days.   In addition, the installments that don’t address the outside world are some of the most memorable.

Perhaps the best part of South Park is that each viewer  will slightly differ in what they love most. I’m a Randy Marsh guy, but my girlfriend loves Butters. Auxiliary characters like Jimmy have grown into integral members of the show. You could be a political science major or an aficionado of bathroom humor – you’re covered either way.

Presented in chronological order, these ten moments highlight the best of a show that has served as the backbone of my adolescence.

In its first four seasons, South Park broke plenty of new territory in terms of inappropriate subject matter. From the pilot episode onwards, the show set a precedent for being gross, outlandish and unexpectedly wise in its storylines. “Scott Tenorman Must Die” represented the darkest depths the show had ever ventured into. The story follows Cartman, who buys Tenorman’s pubic hair in a misguided effort to show how mature he is. The plot escalates as Tenorman toys with Cartman, sending him to the fictitious Ft. Collins Pube Fair and making him cower in the rain while singing “I’m a little piggy.”

Not to be outdone, Cartman devises a plan that results in a brilliant scene where Cartman reveals to Tenorman that not only are his parents dead, but that Scott has just eaten them. Then Scotts favorite band Radiohead walks by and comments on what a crybaby he is. “Scott Tenorman Must Die” sets the tone for Cartman as a truly evil child, and the big reveal scene where he tells Scott about his parents is both hilarious and horrifying. The fact that Radiohead actual did their own voices lends credibility to how great this episode is. 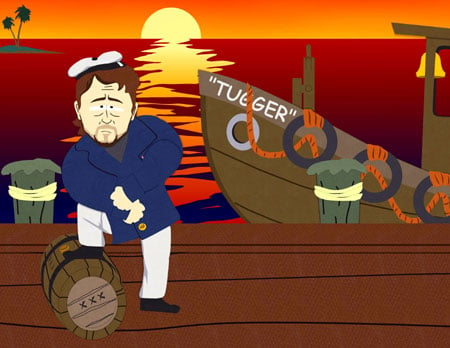 As the show enters what many consider its finest years, each episode revolved around a main plot and a subplot. Often the subplot was entirely unrelated, and frequently it allowed Parker and Stone to explore more original, absurd stories while the main plot played out. In “The New Terrance and Phillip Movie Trailer,” the subplot focuses on a reality show hosted by Russell Crowe where he travels the world fighting people who often have no interest in fighting. The show precedes the movie trailer the boys are desperate to watch, so as they bounce from house to house attempting to find a television where they can witness the trailer, we are given footage of Crowe’s show.

Not only is the one-dimensional Crowe character entertaining, but his sidekick Tugger (a tugboat) is almost too much to bear. At one point, Crowe plays Tugger a song by his band (in reality he does have one), which prompts Tugger to attempt suicide. While in the hospital, Crowe vows to take on a celebrity cause. He selects cancer, and promptly begins mercilessly beating a man with the illness in attempt to “beat” it. The entire concept of Russell Crowes’s Fighting Around the World is based on the actor’s violent tendencies, and the escalation of this character trait by having Crowe fight a man with a terminal illness set the tone for many more controversial celebrity portrayals to come. 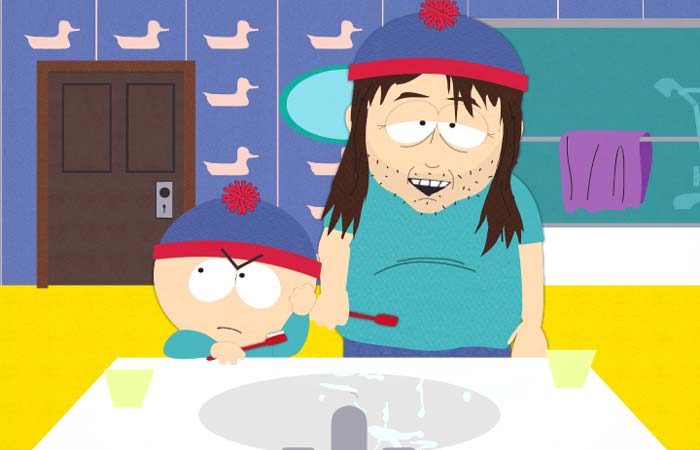 We all remember hearing about the dangers of drugs and alcohol growing-up. There were stupid commercials, special assemblies and a lot of eye rolling. South Park pounced on this parental fear of juvenile delinquency in the episode “My Future Self n’ Me.” The idea is simple: parents hire people to play future, failed versions of their children. Stan’s parents subject him to this lunacy, and he eventually discovers the truth.

First of all, this episode features a brilliant Cartman subplot where he fronts a revenge agency that smears the walls of people who’ve spited you with a wide array of fecal options. More important is the moment when Stan confronts his parents about the future self, who sits at dinner with them. Randy and Sharon refuse to admit the hoax, so Stan pretends to cut his hand off, inspiring Randy to cut off the hand of the future self. The scene of Randy severing the hand represents the desperate lengths parents are willing to go to protect their children, but within a typically subversive South Park context. “My Future Self n’ Me” marked the show’s ability to bring the laughs while also making social commentary.

4. Cartman Convinces Butters the World Has Ended So He Can Go to Casa Bonita (S7E11 – “Casa Bonita”) 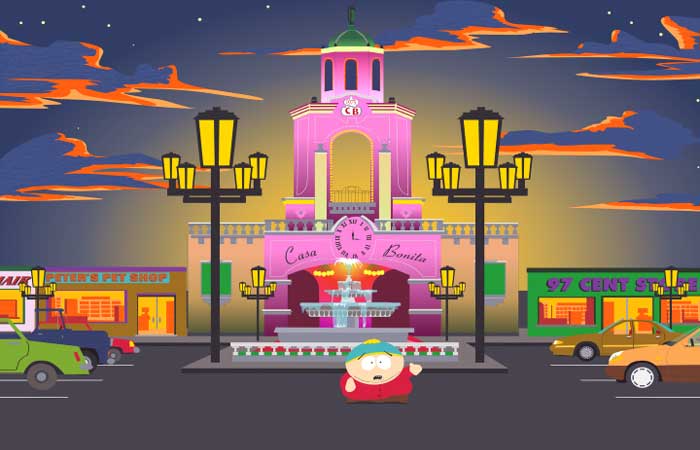 “Casa Bonita” is a vintage Cartman episode. When Kyle offers the final spot at his birthday party to Butters instead of Cartman, he convinces Butters the apocalypse has come. As Butters hides in a garbage dump, Cartman tries to earn a trip to Casa Bonita by being extra nice to Kyle. The true highlight of the episode comes when Cartman’s plot is revealed, and he runs through Casa Bonita while the cops pursue him. All the things Casa Bonita offers are comical: Black Bart’s cave, Cliff Divers…and also they really exist.

This episode is the dawn of the Cartman manipulating Butters era. In addition, the contrast of Stan and Kyle being legitimately worried about Butters while Cartman worries about getting to a novelty restaurant is an excellent example of the way the show plays characters off one another. In future seasons, Stan and Kyle often deal with the story’s primary concern while Cartman focuses on a self-serving element of the greater cause. “Casa Bonita” can thus be seen as a microcosm of later landmarks like the “Imaginationland” trilogy.

5. Cartman Pretends He’s Mentally Challenged to Win the Special Olympics (S8E2 – “Up the Down Steroid”) 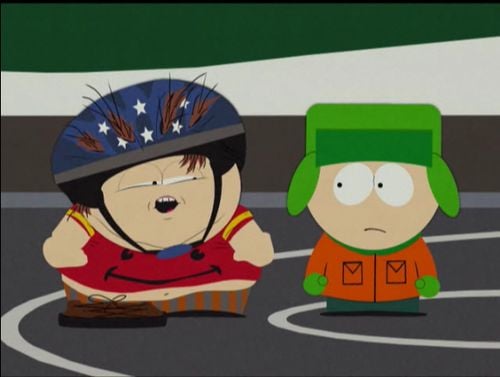 By season eight, the was some question as to what boundaries could possibly be left for the show to cross. Then came “Up the Down Steroid.” The primary story saw the disabled Jimmy getting ripped on steroids and storming the Special Olympics. Also featured was Cartman, convinced he was a lock to beat a bunch of handicapped kids, pretend to be mentally challenged in order to enroll in the games. The picture above is how Cartman interprets his role: a helmet, a Kool-Aid Man shirt, mismatched shoes and a horribly offense contorted face. The scene in which his mother Liane takes Cartman to the Special Olympics registration table is one of the funniest in the show’s history.

Season eight would also mark a shift in focus for the show. In its first eight seasons, South Park’s cast was primarily the four boys and their teacher Mr. Garrison. Characters like the boys’ parents, Tweak, Jimmy, Timmy and Butters all came and went, but in the latter half of the series (as it stands so far) Parker and Stone has afforded new faces significant roles. Namely, Randy Marsh, Stan’s father and the best character on the show, would grow into his own in the series’ best episode the following year.

Fitness blogger Neila Rey has crafted a series of “visual” workouts meant to get the attention of the (often overweight) geek community. He’s gone through and made a huge number of workouts based on various…

Anglophile alert: I am huge fan of British culture. I grew up on a steady diet of British comedy and I’ve never ever looked back. I don’t get the whole “it’s British humor” as an…

Running as geeky of a site as I do, I get approached all the time to plug various “nerd” t-shirt brands, and as you’ve seen, that’s not something I ever do. Most I’ve found I…

It’s been a while since I visited this series, where I attempt to deduce which show currently on television will take Breaking Bad’s abdicated throne as the best show on TV. I’ve already covered Sons…

As told in the tongue of the show itself. My fast is broken. For too long, eyes have been far removed from tales of Spartacus and gladiator brothers. My mind was diverted with thoughts Doctors… 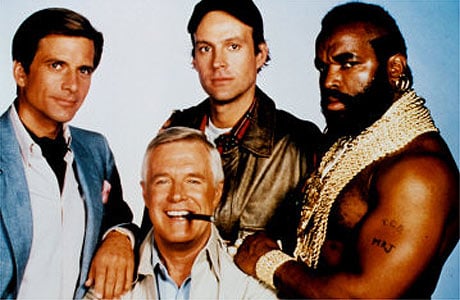