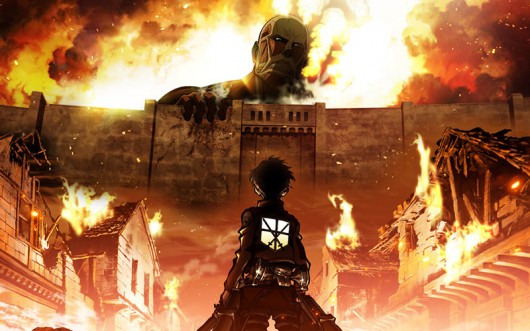 With most Western television taking either the college art project approach of pairing theme-appropriate but relatively static images with an evocative piece of music or the uber-boring voiceover summary narration over quick clips as openings for popular shows, it’s easy to forget about the classic approach of memorable theme songs and videos designed to capture the viewer’s imagination and summarize the show and its characters in irresistible visual ecstasy.

Anime has a long history and thousands of anime series, pretty much all of which continue to take the traditional route of pairing exciting and kinetic visuals with killer music in a way that is designed to pump you up for the show if you’re already a fan, or hook you into watching it if you’re a newbie. It’s becoming almost standard for animes to change their opening theme every dozen episodes (give or take), which to me really speaks of how excited the creators are to showcase their skills and how much the fans look forward to seeing these montages of sights and sounds.

In this age of DVD, streaming, and DVR consumption some people (like myself) have made it a habit of skipping past the minute and a half or so of opening credits sequences in favor of getting the show on the road. But here are five anime with opening sequences I never skip because they are just that awesome.

I’ll start us off with a classic. Eva is not only arguably the finest hard science fiction masterpiece to come out of…..well, anywhere, but its opening theme still does everything right too despite its age. It has action, moodiness, The Cruel Angel’s Thesis is a catchy song made up of different movements with perfect lyrics, and fascinating imagery that invests you immediately.

It’s a solid combination of subtle artfulness and quick-cutting action that combines several aspects of the show into a montage with one of the most classic anime theme songs of all time. It’s simple by modern standards, but remains effective some twenty years later and as you’ll see, the basic idea remains the template for a lot of memorable openings.

Nana kind of cheats because it already has probably the best anime soundtrack ever built into the show. It’s a story built around two killer rock bands and the way they influence the lives of the characters. Obviously, it’s going to have kickass theme music. The show goes through three different opening sequences and they’re all awesome. And the way the openings are integrated into the show, with the music artfully segueing from each episodes intro sequence, is extra cool and gives it punch every time you see it.

The first features of theme of a performance from the title character’s punk band Black Stones (BLAST) interspersed with moody imagery of the other title character (both girls are named Nana). I particularly love the shot of both of them standing in front of a billboard for the band Trapnest, whose massive success sets the stage where this story takes place. The song rocks like crazy and would probably get you excited for just about anything, but the imagery is amazing too.

Trapnest takes the second rocking opening in style, with Olivia Lufkin’s freakin’ amazing vocals taking center stage and more stylized imagery on display. My favorite shot is Trapnest’s Reira backlit onstage extending her arms dramatically before cutting to suddenly dark imagery of the male supporting band members of BLAST and Trapnest. I interpret this as a statement as saying that Nana is a story about women and while the men have important parts to play in their lives, the spotlight is for the ladies this time. Sorry, boys.

The third and final opening is back to BLAST and more rock concert imagery intercut with melancholy shots of the lead characters with an overall night motif. This is relevant to that final phase of the story for reasons I won’t spoil, and I kind of love that part at the end where each image burns away from inside to reveal another image underneath which burn away in turn and so on. God, I love this show.

Ergo Proxy isn’t a really big name anime, but conceptual science fiction buffs are going to want to check it out. There’s nothing else like it that I’ve seen. Like Eva, the opening to this one throws a lot at you, but since Ergo is more modern, it does it in much more visually stimulating ways with a parade of overlapping images and inscrutable text. There’s also a crow/raven motif throughout (possibly symbolizing death?) that adds an interesting feel to the almost overwhelming imagery.

Once the verse to Monoral’s excellent Kiri kicks in you get more traditional shots of various characters, but still with overlapping images and the way the characters are moved is really visually interesting, even without the unique backgrounds. And if you can find something more dramatic-looking than the shot at the beginning of the chorus with the revolving/ascending shot of the male lead screaming at the sky as the wind blows around him while the singer’s vocals soar, congratulations.

The video is completed with more fast shots, including more of the masked title character and the coolest-looking anime heroine ever, Re-L Mayer, leveling a gun at the camera with eyes that just do not give a damn. The closing shot of the airship flying off into the post-apocalyptic wasteland before the title card is the best possible way to prep you for a unique journey. I really need to watch this series again.

While the Hellsing Ultimate remake/continuation kicks ten shades of crap out of the original vampire hunting series, the old one does have a great damn title sequence going for it. A World Without Logos sets the tone with piano that screams hard-boiled noir and imagery of the famous guns and visage of anime’s most badass bloodsucker, Alucard, completing the scene as a crucifix imposes itself over his face leaving only his creepy eyes (previously obscured by his trademark red sunglasses) visible for an instant before the title logo -complete with slogan- comes up. Nice.

Scroll down to the city streets, where Alucard’s hellhound familiar, Baskerville, walks amongst us with a silver crucifix in its mouth. A procession of tortured undead follow him down an alleyway, and not a single f*** was given on that day as it cuts to Integra Hellsing being the angry boss she is followed by a murderously great shot of Alucard that spans the length of his gun before revealing his nemesis, the mad priest Father Anderson, at the other end and the ensuing confrontation.

A shot of headquarters burning segues into a silhouette of Alucard amorphously changing forms with various supporting characters appearing in the background, a drop of blood, and then the iconic image of reluctant vampiress Seres Victoria struggling not to lick the red, red kroovy off of a sword. Zooming out and we are looking into Baskerville’s eye as he walks away from the ghouls he just leveled, leaving the crucifix dangling from one of their now-inanimate hands as he walks away. Guess we missed the party. Actually it hasn’t even begun since the show hasn’t even started yet. How cool is that?

I’ve got a confession to make: when I put on my Attack on Titan shirt, I swear to god I hear the show’s first opening song and it makes me feel kind of epic. Is that weird? I think that’s weird. But I’m bringing it up to point out just how awesome that song is. It’s impossible for me not to immediately associate the story with the insanely dramatic theme music.

An image of Wall Maria being blown to crap opens the proceedings (same as in our story) and exposes the title card followed by the image of our protagonists standing among a pile of corpses. That’s what you call setting the mood, baby. Images of rampaging titans with blood splattered on the lens precede classic military imagery and in half a minute with no verbal explanation, you now understand the entire premise of the show if you’re paying attention.

Some art from the manga is then presented, including the recurring image of a praying mantis devouring a butterfly, which encompasses the show’s theme of the savage and uncaring destroying the beautiful, free, and innocent. Now that the premise and theme have been put on display, it’s party time.

Now we see the show’s trademark Omni-Directional Mobility Gear in action, which is a big part of what makes Attack on Titan and its opening so visually kinetic and cool. Think of the ODMG as a hip-mounted cross between Batman’s grapnel and Spider-Man’s webshooters that humans can use to battle and evade the massive cannibalistic titans. The shots here are to die for, as is the one of besieged humans repelling the hordes with cannon and rifle fire.

Next is our hero Eren Yaeger launching a solo assault on the dreaded Colossal Titan, pausing at the moment their eyes meet and the insanely epic shot of ODMG-wielding defenders launching themselves from behind city buildings and filling the sky as they descend on the attacking titan mob. Some more dramatic quick cuts, and then the final shot of our heroes standing in open land outside the walls where humanity is trapped, staring at the sun and their symbolic freedom. Yes.

Attack on Titan’s second opening would have made this list anyways, so it feels wrong not to include it. This time Wall Maria is obscured by a rush of birds, symbolizing freedom and revealing a wide open expanse of land beyond the wall; a place only the Scout Regiment Eren now belongs to has ever seen. Meanwhile, the new power metal-infused theme rocks. Some of the imagery of this arc such as the Scout’s signaling flares and a shadowy glimpse of the terrifying Female Titan is followed by some quick cuts and an image of the cast standing in the sunset (likely symbolizing humanity’s impending doom) with images of their faces superimposed over the scene.

Zoe shows up again, this time with blood on her mouth, reinforcing the monster theme, along with more character cuts, including Erin immersed in blood, along with the Scout’s wings logo transforming into flying birds, restating the end goal of freedom. And not it’s human titan battle time up until the closing title card. My body. It is ready.