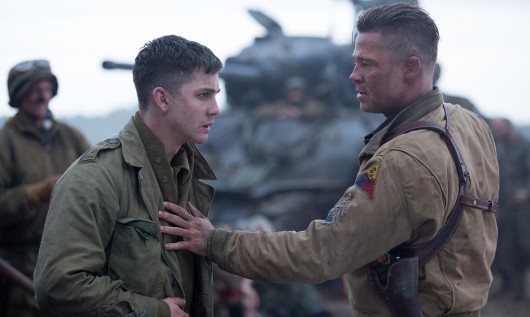 A couple weeks ago, Devin Faraci of Badass Digest wrote up a piece that delved into the problems filmgoers might find in the climactic sequences of recent war movie Fury. He’s not the only one to make mention of the issues; the premise in this piece is that the first two-thirds of Fury are basically so brilliant that they make up for a third act that turns into a typical Hollywood cheese-n-action climax. He’s not entirely wrong, either. The climax of Fury definitely has that Hollywood vibe to it, and in some ways it is a tangent from the approach the movie opens with.

But is it a problem? That I’m not so sure about. The more I think on the ending of Fury, the more I think its shortcomings and incongruities are actually their own little avenues into a different discussion of what the movie is doing.

So here’s my take. 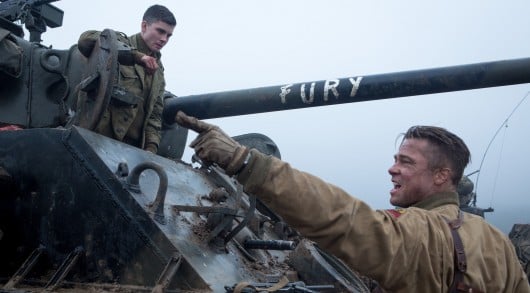 Fury provides a relentlessly bleak portrait of war. Some have described it as a WWII movie made like a Vietnam movie; this is accurate. As far as Fury is concerned, violence might thrill, but more often it just hurts people. Even “noble” war is ultimately sick and certainly not really the occupation of heroes. We haven’t been making John Wayne war movies for a long time, but this is probably the furthest a WWII movie has wandered from that model to date.

Then, the climactic action sequence kinda turns into a (admittedly still gruesome) John Wayne movie after all.

It’s not like Fury starts promoting violence as an awesome and desirable activity, but even a little shift in that direction is strange after earlier sequences. For instance, that moment where a soldier starts burning to death, then frantically grabs his pistol and blows his brains onto the mud to escape the trap of his own flaming body. With images like that setting the tone, it’s hard to go where this final battle wants us to go. Put simply, it’s hard to cheer for more people dying. 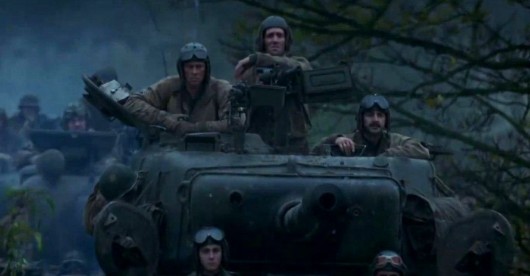 In Fury, dying is miserable. It sounds weird to point that out — most of us are already trying to stay as far away from it as possible. In movies, though, the unadorned agony and unfairness of death is a strange sight. Fury makes up a lot of ground in this department. Pain, both physical and psychological, is a constant companion for our band of protagonists. It even manages to ruin the one moment of normalcy and peace; of course, I’m referring to the extended dinner scene with the two German women.

This scene is the core of the film. It’s the one moment where the movie steps back from the absolute shit our heroes are buried in, to show just how far gone they are from anything we might understand. In the German house, Norman finds young love, warm food, and soothing music before having all three rudely tainted by the uncouth actions of his tankmates. The subtext is text: War ruins society.

This sequence leads to what is — for me — the most haunting moment of the movie. Because the war doesn’t just enter this house by way of society-starved young men. It enters on the wings of explosives, launched by other Germans to try and bomb out the American military. And of course, it isn’t just the American military who die in the attack. 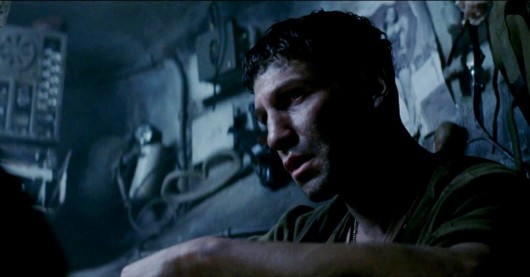 As Norman grapples with the shock, the chaos, the utter unfairness of modern combat, Coon-Ass grabs him in a weird hybrid of an embrace and a choke hold. Norman rages; C.A. rages back:

Norman does, just like everybody else. War has turned these men into monsters. Coon-Ass is the one who seems the most at ease with that fact, but the grueling combat has wounded everybody. Wardaddy’s literal scars appear when he removes his shirt to clean up. Gordo reveals psychological ones while telling a story about the time this squad was charged with the task of murdering horses left on a battlefield. Even Bible, devout Christian though he may be, seems as as anybody of barbarism under the right kind of pressure.

Also, Shia is freakin’ great in this.

So when Fury turns to something approaching Hollywood heroics in the final reel, I don’t think it’s doing so falsely. The dirty work of killing men was something that other people did at the start of the movie. Now we’ve met the men who do it, and against all our best instincts it’s hard not to root for them when they come upon their enemies. As an audience, we can accept this line of thinking or not.

What Norman has to accept is that these are the guys he’s stuck in that damn tank with. End of story. He had no say in the matter, and the only way out is either surviving until the end or dying before it’s over. If he wants to go with survival, this is the group he has to be part of.

Brad Pitt’s soldier nickname is “Wardaddy.” It’s more than just a cool leader name; it’s a description of his function for these guys. He’s their father during the tour, and under his watch they will be brothers. As they say, you don’t get to pick your family.

And the weird ending of Fury, to me, suggests that maybe there’s a weird sort of heroism in that after all.

What do you guys think? Did you dig Fury? Did the ending work for you?

Even though Guardians of the Galaxy is pretty far away, I have a hunch that Rocket Raccoon is going to be most people’s favorite new character of the year. He’s a raccoon, with guns, and…

Fun fact: There used to be a site called Unpoliticalmag.com where yours truly would go and write about politics, it was a lot of fun, and we even got on The Daily Show once, but… 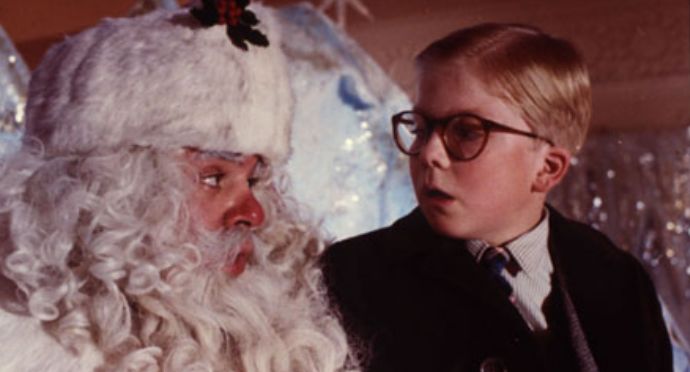 I’m not a big fan of Christmas.  It’s a time of the year when I feel alienated from the rest of society and cable television is littered with sappy Christmas movies.  Maybe you have to…

Promotional material from the upcoming X-Men: Days of Future Past where Peter Dinklage is the main villain, Bolivar Trask, inventor of the mutant-hunting robots, The Sentinels. I fully approve the decision to make Dinklage have…

Artist Bryan Ewing had some fun with the lead villains of The Shining and Psycho in these Japanese-inspired poster remakes. I believe each are available for purchase here somewhere, for a limited time. Someday I’m…

The remake of Stephen King/Brian De Palma’s Carrie is coming out, presumably to further cement Chloe Moretz as “that murdering teenager” between Kick-Ass and Let Me In. While I don’t know if the remake will…