While Pacific Rim failed to make much of a splash last summer, Godzilla has been stomping its box office competition this weekend. Proving that kaiju still have a place on the silver screen, the film’s smart marketing campaign successfully avoided being lumped in with its nauseating cousin, the 1998 Roland Emmerich version.

Renewed interest in kaiju, coupled with Godzilla‘s extremely lucrative opening weekend means we’re probably going to see a lot more monsters stomping cities in the near future. Michael Bay has evidently preemptively cashed in, and many more studios are guaranteed to follow suit.

This buzz seems like the perfect time to stick up for what is easily my favorite kaiju movie of all time, Big Man Japan. The film is an interesting look from the inside-out about what it means to fight giant monsters as a career choice. Written, directed, and starring Japanese filmmaker Hitoshi Matsumoto, the movie explores the nitty-gritty of giant monster fighting, such as how a giant puts on his fabulous and enormous purple underpants. 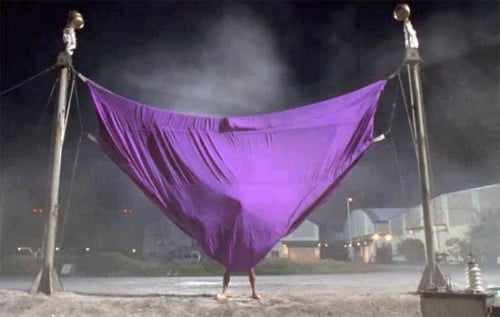 Taking the form of a documentary, the film mostly consists of interviews with the main character, Masaru Daisato. He is the sixth in a long and formerly illustrious line of Dai-Nipponjin – men who transform into giants in order to fight off monsters and save Japan. Matsumodo plays the whole concept almost entirely straight, including details as to Daisato’s corporate sponsorships and declining broadcast ratings.

In fact, most of the film would be boring as hell if it weren’t for Matsumodo’s enigmatic performance as Daisato, in addition to his documentarian’s extremely blunt approach. Moments like Daisato’s military attendants uncomfortably admitting that the transformation ceremony has become progressively more half-assed punctuate the sad and pensive nature of Daisato’s responses.

Which is not to say that the whole film is a drag. The monster fights are delightfully ridiculous, with opponents that sport bizarre attack strategies and disturbing faces that resemble ugly, middle-aged people. Watching Daisato beat the crap out of his outlandish foes with a big stick usually proves anticlimactic, but this, again, just provides more humor. The deaths of the kaiju are usually followed by a solemn but cartoonish ascent of their souls into heaven, much in the same fashion as Who Framed Roger Rabbit.

They also sport bizarre behaviors, such as one kaiju who is only interested in wooing another via a mating dance that resembles a cross between birds-of-paradise and breakdancing. All the while, the scene is causing a traffic jam below. 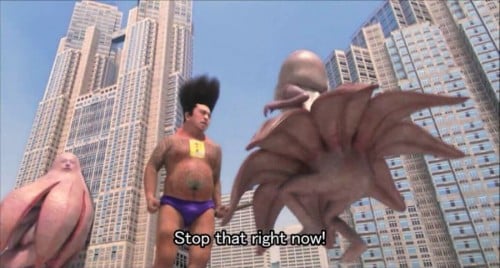 It’s also worth mentioning that Matsumoto’s directing really makes the most of his modest budget. The CG looks dated, but fits in with the playful vibe of the film’s kaiju sequences. Furthermore, the cinematography is top-notch. Most shots are framed extremely well and make the scenes that drag out a bit too long much more watchable for it.

Going in to the film, the extremely odd battle scenes seemed like the main draw, but instead I got sucked into the story of Daisato. He lives in a neglected house provided by the government and makes the modest salary equivalent of $60,000 a year including the money from his sponsorships. His agent, however, spends almost that much on a new car following a successful fight, while he is forced to take public transportation. Also, his wife and daughter want nothing to do with him, and the public vandalizes his house in protest of his wasteful and non-eco-friendly destruction. Rather than pity his subject, the documentarian forces these realities to the forefront, and causes Daisato to become depressed and withdrawn as the film progresses. 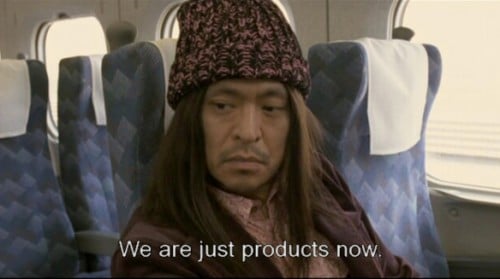 The point of all this weird juxtaposition hits home midway through the film, when we find out how successful and popular Daisato’s grandfather was at his kaiju killing gig. The Fourth Dai-Nipponjin evidently brought an entourage of geisha, servants, and fans with him everywhere he went, and never had to pay at restaurants and shops because of his immense popularity.

At the time, the Ministry of Monster Prevention enjoyed a glorious surge in resources, while now it is just a shade of its former self. The interviewees claim that the power stations used to electrocute and transform the Dai-Nipponjin dwindled from hundreds down to merely two. Daisato also points out that there were a lot more monsters to fight back then, and that people have lost interest in the brawls because they have become passé.

This theme of lost greatness could easily be understood as a metaphor for the first-world’s growth and subsequent decline following World War II. Self-made men in the fashion of Daisato’s grandfather made their mark on the world, but as corporate interests and an increasingly jaded population came to grips with modern reality, figures like Daisato became pariahs rather than heroes. The cynicism of Daisato’s sponsers, agents, bureaucrats, and viewers point to Matsumoto’s perspective regarding our increasingly nihilistic society. 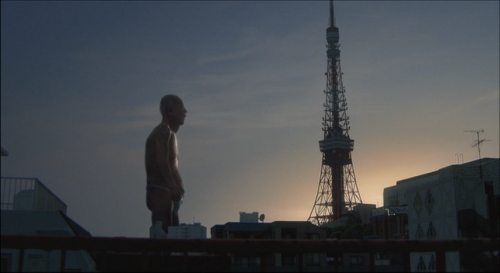 Through this lens, the film becomes that much more tragic despite the monster freakshow. Daisato seems progressively more traumatized with each transformation, and his agent suspiciously seems to be placing him in the public crosshairs with each fight, including one where his opponent was a giant, sickly child resting on the Tokyo Dome and crying for his mother. The increasing negative publicity has Daisato hopeless by the end of the film, and as an audience we get the sense that the corporate world is using him up until there’s nothing left.

Living in an era where most urban metropolis’s populations peaked in the 50s, as well as one with increasing job instability and steadily declining wages, we can identify with Daisato’s sadness at being born in an unfortunate time that seems to no longer want him.

This theme is the real reason why I think the film is a must-see for any kaiju fan; it creates a context far beyond any other popcorn flick and which lingers long after the end credits. Yes, the pacing can be murderously slow, but I promise if you sit through it by the end you will be entertained and intrigued by Matsumoto’s take on the kaiju genre. 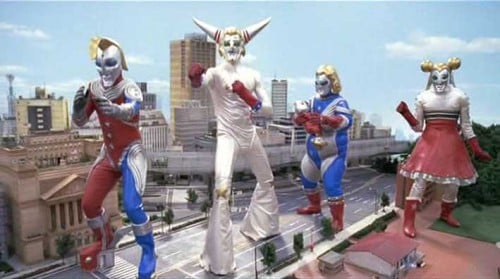 Also, slight spoilers, but there’s an abrupt style change at the very end, along with a stellar credits sequence that seems to be poking fun at America’s approach to militarism, as opposed to Japan’s. It makes watching the film to completion that much more worth it.

Jarrod Lipshy is a BA English graduate who wants to be a full-time writer. He collects old video games and sometimes watches weird Japanese movies based on the poster alone. 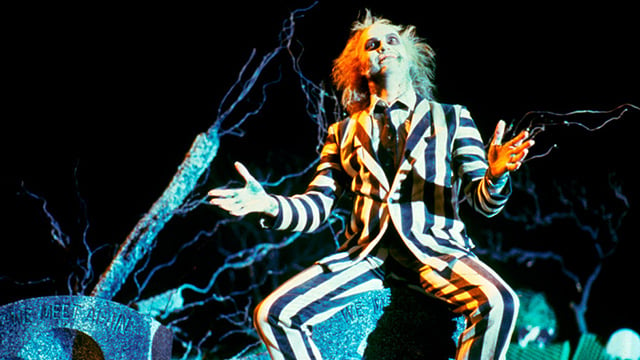