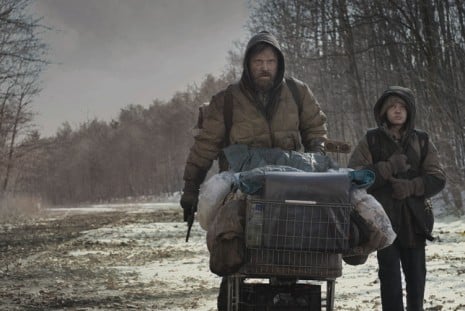 There are a great many movies about the apocalypse out there, but I don’t think there are any as thoughtful and poignant as The Road.

It’s a film that didn’t make it to all that many theaters for all that long, and as such, I think it was missed by many who would have appreciated it. It’s a stark picture of a dying world, stuck in permanent winter after some unnamed catastrophe that was likely nuclear war. Very few souls are left, and many that are have turned to cannibalism or other such depravities.

The movie follows two characters, known only as Man and Boy (Viggo Mortsensen and Kodi Smit-McPhee respectively) who travel the countryside trying to survive. The film has many disturbing moments throughout, but its most lingering effect is the degree of hopelessness which is felt throughout. If you know that going in, you’re better able to appreciate its horrific beauty in the way it’s filmed and acted. I actually thought that it might be a metaphor for the homeless in America, but I’m not sure if the author of the book, Cormac McCarthy had that in mind when he wrote it.

In any case, if you want the apocalypse with class, check out The Road for yourself. My full review of it from way back when is here.