1999 was a busy year for movies. The biggest cinematic event was the new Star Wars film was coming out at long last, and none of us knew it would be terrible.  Also released were The Sixth Sense, Toy Story 2, Fight Club and The Matrix. I could go on, but as you can see, it was a pretty stacked era for films.

So it’s no surprise that a few great movies slipped through the cracks. Despite premiering at over 2,000 theaters, The Iron Giant only made about $5M its opening weekend. It was from Warner Bros, and didn’t look anything like the typical Disney animated films kids would normally flock to. Its director, Brad Bird, had yet to helm The Incredibles or Ratatoille. And Vin Diesel? Is that some sort of car brand?

A boy finds a giant robot in the woods, befriends him, and spends the film guarding him from government agents set to take him in. In additional Diesel’s best role ever as the giant, Jennifer Aniston and Harry Connick Jr. have voices as well. The film can be best described as “charming,” and it’s nice to see a kids film break away from the typical “prince and princess” model of old Disney, or the “hilarious talking animals” philosophy of  movies like All Dogs Go to Heaven, An American Tail or The Rescuers. In a way, it was a precursor to the sorts of films Pixar would be coming out with, as it not only has a creative concept, but is full of emotion as well. The climactic scene of the film is one that got me more choked up than practically any other I’ve ever seen, and I bet it might to do the same to you.

So if you haven’t, check out The Iron Giant. Show it to your kids if you like, but even if you’re all grown up, it’s worth a watch.

Alright, so I’ve featued a few posts that have cute things turning mean. There have been Twisted Disney Princesses and Pokemon from Hell among others, but today I thought it might be nice for a…

As much as I love Gerard Butler, this movie definitely needs a dose of The Fett. I would also go as there’s probably now at least a 70% chance that Jennifer Aniston either gets frozen…

Today I’m recommending an extremely cheesy but important movie for you to watch:  Teen Witch.   And here’s how the story goes… Louise is not very popular at her highschool. Then she learns that she’s descended…

We are all doomed, you know? Hopeless, lost souls who are running in loops to try to trick ourselves into thinking we are making progress. The reality is, we are rodents on a hamster wheel….

Samurai films (aka jidaigeki or chanbara) are an essential part of any film fan’s international cinema diet. Japan has a long, long history of supplying art both philosophical and visceral by utilizing their nation’s… 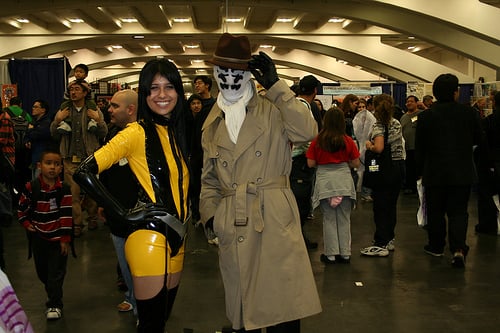 Considering the amount of hype Watchmen is getting, this movie better deliver.   We’ve seen it time and time again.  A movie is hyped for nearly a year and then winds up sucking big time.  Something…