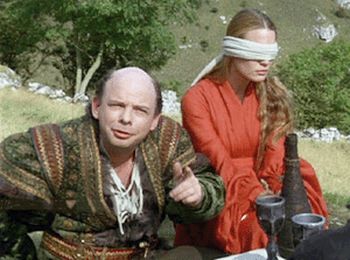 “Inconceivable!”  Does that ring any bells?  It should.  That’s because it came from The Princess Bride and the wonderful annoying little man who played Vizzini is none other than Wallace Shawn.   And if any of you out there really knew his name then I simply don’t believe you. I mean if you need an annoying voice pest of a man, then Wallace is your dude.

I couldn’t believe this when I read it, but he’s got over 130 credits to his name.   Clearly most of them are for his voice work but I’ll never forget the time he appeared on The Cosby Show.   Also, he’s done plenty of television work.

It’s just that it’s so hard to even think of him as anything but Vizzini.  Oh well.

Classic Vizzini after the jump….

“Never mess with a Sicilian when death is on the line!”