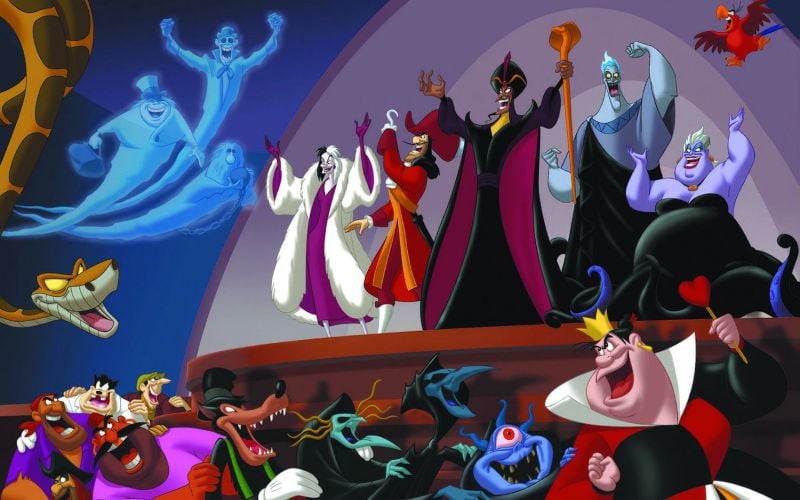 Not that I’m not blown away by the computer animation seen in today’s movies, but I sort of miss the traditional animation, particularly in Disney movies.  We may see a reversion back to that type of animation here and there, but for the most part, I’m afraid it’s gone for good.  One of the things I really liked about the traditionally animated Disney movies were the villains.  It takes a real sadistic villain to make the protagonist seem heroic, and some of Disney’s villains have been quite memorable.  Especially when they get to sing a song about how evil they are. 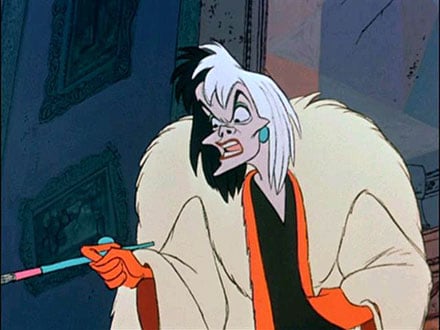 It should be an automatic red flag that Cruella smokes her cigarettes with a filter (by the way – how odd is it to see cigarettes in a Disney movie?), but her ridiculous hairstyle gives everyone fair warning that she’s out of her gourd.   And she is: the reason she is so set on acquiring a great number of puppies is so that she can turn them into fur coats.  Her great wealth and submissive henchmen make Cruella formidable for anyone, especially a small Dalmatian puppy. 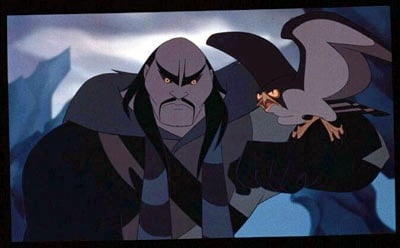 It’s tough to look more bad ass than Shan-Yu, the conqueror.  His Hun warriors are loyal, numerous, and deadly, and Shan-Yu has no qualms about resorting to classic villain behavior – like kidnapping.   Shun-Yu seems to get off on killing, and his falcon, Hayabusa, is just about the only pet bad ass enough for him.  Even Shun-Yu’s death was awesome; he was attached to a rocket that slammed into a tower, creating an incredible explosion.

8. The Horned King – The Black Cauldron 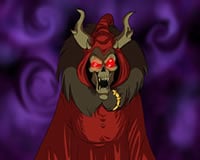 Seriously, just look at this guy.  Just looking like that immediately gives you villain street cred.  The Horned King seeks out the Black Cauldron so that he can create an army of undead soldiers and – like many awesome villains aspire to do – take over the world.  John Hurt voiced the Horned King, helping to create one of Disney’s scariest villains.  The Black Cauldron, unlike almost all of Disney’s animated movies, was rated PG, and a lot of that has to be due to The Horned King. 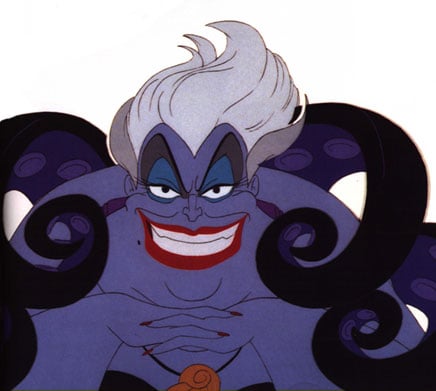 Ursula’s design always intrigued me: her top half is an overweight, seemingly sexually aggressive diva, while her bottom half is that of a giant octopus.  Pretty nasty.  When brute force or the use of her pet eels don’t get the job done, Ursula relies on sorcery and trickery to get what she wants.  Ursula managed to get a hold of Triton’s trident and would have ruled the oceans were it not for Eric killing her in the same way Ellen Brody killed Jaws.  Which, incidentally, is the only cool part about the Jaws video game for Nintendo.  Remember?

6. Gaston – Beauty and the Beast 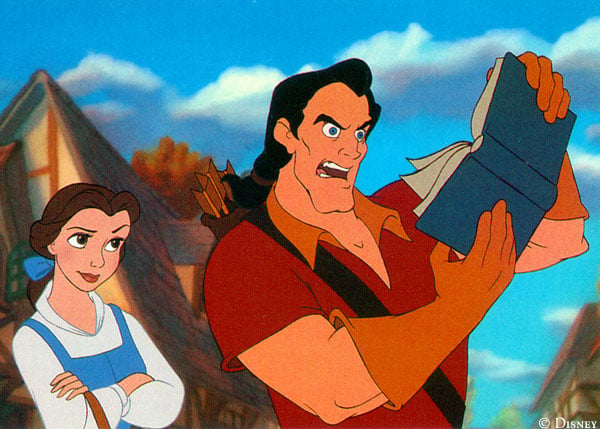 He’s not disfigured or magical or anything like that, but Gaston comes in the six spot simply because of his overwhelming douchebaggery.  I’m surprised he didn’t walk around with his collar popped.  He’s incredibly self-centered and focuses on superficial things, and his general intolerance makes for a terrific villain.  I’m guessing that we all know someone like Gaston.

5. Queen of Hearts – Alice in Wonderland 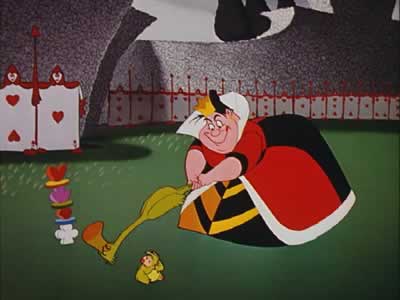 The Queen of Hearts takes full advantage of her status as Queen.  Everything is “her way,” right down to the matter in which her people speak.  The Queen enjoys playing croquet using flamingos and playing cards, and if she misses a shot, she’ll hold someone else accountable.  And that means a beheading.  Anytime anyone even slightly annoys her, the Queen of Hearts orders that they get his or her head chopped off.  That, my friends, is true power.  You do not mess with the Queen. 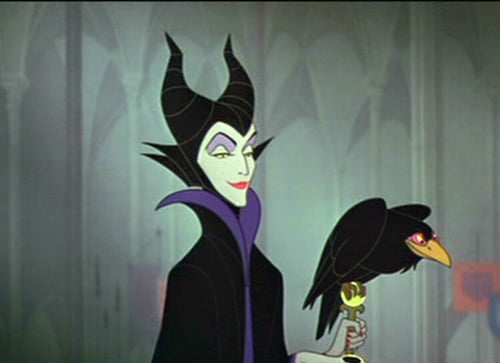 The “Mistress of all Evil” is indeed very evil, and quite powerful to boot.  Because she was not invited to the christening of the king and queen’s daughter, Aurora, Maleficent decided the best thing to do was to put a curse on Aurora that would render her dead on her sixteenth birthday.  That’s probably overdoing it a bit, but when you can teleport and turn into a gigantic, fire-breathing dragon, who’s going to tell you that you’re out of line? 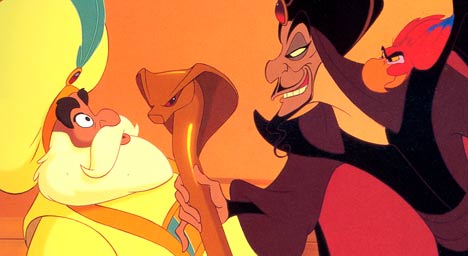 Jafar is an evil sorcerer and a known backstabber.  Once he obtained the magic lamp, Jafar was gifted with a number of abilities, such as shapeshifting, physical manipulation, and the ability to create weapons out of thin air.  Using his staff, which resembles a cobra, Jafar can hypnotize people.  Despite all his power, Jafar’s downfall was his greed.  By wishing to become a genie – and presumably all-powerful – Jafar was sucked into a magic lamp, trapped and at the mercy of a future master. 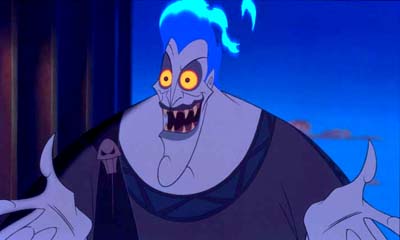 As lord of the Underworld, Hades in essentially evil incarnate.  The fact that he is voiced by James Woods lands him all the way in the number two spot, as nobody can channel pure assholishness like Woods.  It fits perfectly.  Hades desires to rule Mount Olympus but knows that Hercules stands in his way.  Naturally, he wants to destroy him.  Hades is a master manipulator (what else would you expect from Greek mythology’s version of the devil) and smooth talker and at one point strips Hercules of his power.  Unfortunately for Hades, cheesy, cliched, sappy love saves the day. 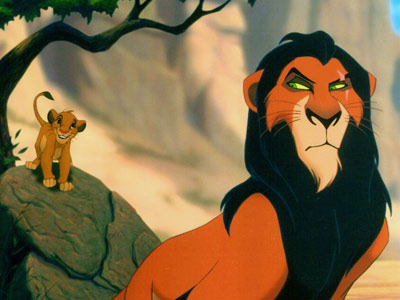 The best Disney animated film (we’re talking pre-computer animation/Pixar, here) also features Disney’s best animated villain.  Voiced by Jeremy Irons, Scar sets out to kill his own brother (Mufasa) and nephew (Simba) so that he can reign as king.  He’s cowardly when it comes to confrontation, but Scar is as deadly an opponent as one could have.  He makes good on part of his aim and actually kills his very own brother.  Even near defeat, Scar is a slimeball.  Faced with fighting his Simba, he blames all his crimes on his mercenary hyenas, just before flinging hot embers into Simba’s eyes.  That’s the equivalent of an animal sucker punch.  Scar is the lowest of the low, which is why he’s number one in this edition of Power Rankings.

Any Disney animated villains I left out?  Maybe Captain Hook should have cracked the top 10?  Hit me up and let me know.

Now see here, kids: Right outta the gate, I’m warning you that there will be no Transformers on my list! (“It’s a car! It’s a robot! What is it?!”) I prefer vehicles that have an… 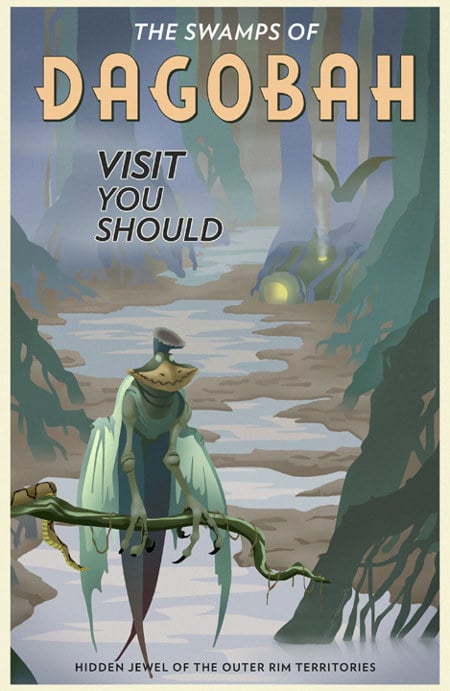 This is a series of vintage travel posters from the Star Wars universe by graphic designer Steve Thomas. In a ’60-ish style, he lists all the exotic locales you can travel to, and how you…

I know that our regularly scheduled programming for today would include my “Crappy Movie Recommendation of the Week” but I couldn’t help myself.   When I came across these photos on Buzzfeed I had to share…

For those of you who don’t know, 300 is without question my greatest guilty pleasure move of all time. I understand that it’s complete nonsense for the most part, but I love it nonetheless, and…

httpv://www.youtube.com/watch?v=pPTnMVs5vkw This was sent to me by a reader a long time ago, but I misplaced it until now. It’s a mashup of Jim Carrey’s The Cable Guy with The Girl with a Dragon Tattoo…

I haven’t been to Disney World in a number of years, and certainly not since they took over Marvel. I imagine that opens up whole new worlds of possibilities for attractions, and this gallery showcases…