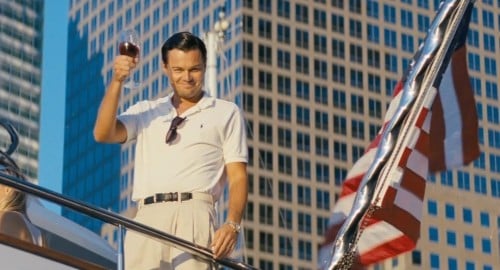 “Greed is good,” Gordon Gekko famously said in Oliver Stone’s Wall Street. In The Wolf of Wall Street, however, greed is the despicable, deplorable, debaucherous and pretty much the worst thing on planet earth. And Quaaludes are pretty bad too.

The Wolf of Wall Street marks the fifth time director Martin Scorsese has teamed up with Leonardo DiCaprio in an epic quasi-biopic that aims to win either or both of them an Oscar. This time, DiCaprio is yanked outside his comfort zone to play one of his most appalling roles to date, and that’s after seeing him as a merciless slave owner last year in Django Unchained.

Here DiCaprio is Jordan Belfort, one of the most notorious real-life swindlers ever to work on Wall Street. The man went from nothing to earning 50 million in a year at age 26, and then had his empire come crashing down around him as the FBI probed his and his friend’s illegal and shady trading activities.

The premise behind Belfort’s rapid wealth accumulation is complex, but pitched to the audience as relatively straightforward. In short, his rocket really started taking off when he realized he could sell regular stocks to rich folks, then after gaining their trust, sell them shadier, shittier stocks where he’d take a 50% commission on each sale instead of the traditional 1%. The practice made him and his partners very rich very quickly, and they escalated into even more obviously illegal activities like bribery, insider trading and so on. 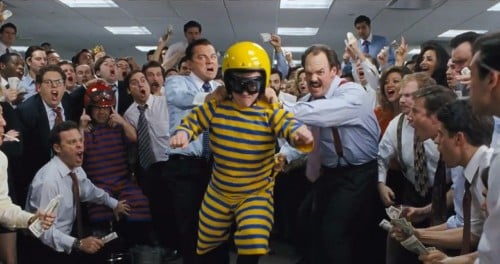 It’s so over the top it almost doesn’t seem real. The movie is based on Belfort’s own book, and constantly feels like a guy telling tall tales to make his own life sound even more impressive than it really is. Not to say the things shown didn’t happen, but it’s often just too insane to feel even remotely real. Belfort is a cartoon, a man constantly drifting from one high to the next, banging hookers and lines of coke, and inviting the rest of his friends and colleagues to do the same.

The problem with Belfort is that there’s just absolutely no progression at all with his character. He starts out slightly rotten and ends up entirely rotten, with nary a shred or even a hint of a redeeming moment for his character in three hours. There’s a scene where his wife finds out he’s been cheating on her with a supermodel which is supposed to be vaguely heart-wrenching (for her), but why should we care? We’ve been watching him plow through hookers for the last hour, so why should this be any different?  There’s nothing redeeming about the man, and you don’t once feel bad for him even as his world starts to crumble around him. Having the villain be the protagonist is nothing new in popular culture, but good or bad guy, leads need to at least have some level of depth to them, and Belfort and his primal motivations are about as deep as a kiddie pool. Money, sex, drugs, the end. Even Tony Montana had more moral quandaries than this guy.

All this would be well and good if the film was funny enough to get away with such a hateable lead like Belfort. Plenty of comedies don’t need anything resembling dramatic moments to work, as they’re simply so funny we don’t feel the need to emotionally invest in the characters.

And while The Wolf of Wall Street is funny (though more purely insane, truthfully) in no way should any movie attempting to be a through and through comedy be three hours long. Comedies are generally shorter than most films anyway, and usually work best from 90 to 110 minutes. But 180? That’s just nuts, even for a master filmmaker like Scorsese. That works for his usual fare, but the movie has been bloated beyond belief here, and there were just so many scenes that could have obviously been shortened or cut completely.

DiCaprio is great in the role, and he has a phenomenal supporting cast to back him up including the inexplicably amazing Jonah Hill who has somehow stumbled onto the A-list these past few years. DiCaprio’s second wife Naomi is played by relative unknown Margot Robbie who is great in her breakthrough role, not to the most breathtaking actress in any movie out this year. The film is well shot and has a fantastic script which does make the three hours feel much shorter most of the time. It’s a Scorsese film, which has an obvious quality floor automatically, but I think he needed to adapt more to the genre of the film. A three hour black comedy is just too damn long, no matter who you are. 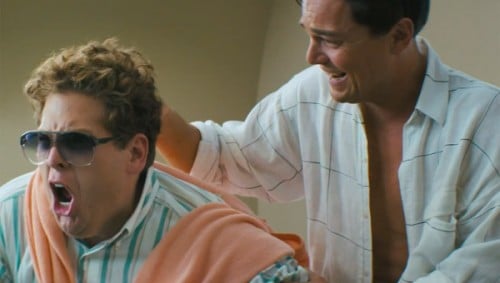 Weirdly, the fictional Gordon Gekko seems like a far better example of a somewhat realistic Wall Street tyrant than the childish Belfort, obsessed with collecting girls and toys and pills. Still, Belfort’s little cult of greed and excess certainly paints a less than rosy picture of the financial industry, even if they’re not all necessarily inhaling cocaine like it’s oxygen and throwing midgets at velcro dart boards for company team building exercises. But still, if the film is going for social commentary about the financial sector, there are far better examples to be found in Hollywood.

Ultimately, the film is fun because it’s enjoyable to watch Leonardo DiCaprio be a complete and total loon, and watch Scorsese try and cram as much debauchery as humanly possible into one film. Weirdly, some seem to be coming away from the film viewing Belfort as aspirational, which makes me weep for our country.

This isn’t Scorsese’s genre, but he lands yet another great performance from Leo and watching him bring Gomorrah to the present day is entertaining enough to be worth the price of admission.

There’s been much speculation about whether or not the central trio of the original Star Wars would return in some capacity for episode VII. Would JJ Abrams use them or write his own story without…

I almost forgot to write this post this year, but it’s always one of my favorites. You’ve seen my best films of 2011 list, but I have a special place in my heart for a… 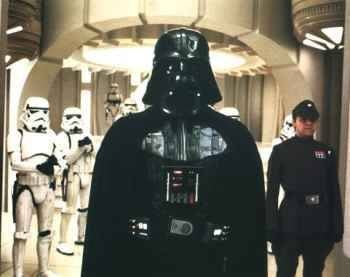 Perhaps one of the most recognizable themes in movie history,  The Imperial March or sometimes referred to as “Darth Vader’s Theme” by John Williams will always be a staple in any fan of the Star…

The new Superman costume was recently revealed by Warner Bros. (which can be seen in full below), but I prefer the photoshop cuddle session that was spawned out of the two heroic images put together….