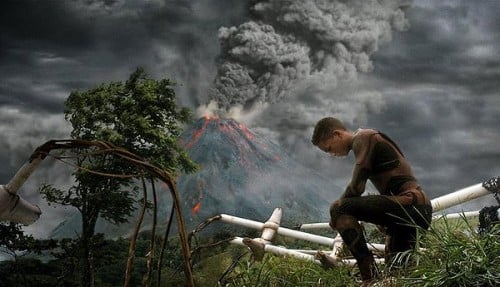 It’s a common complaint that modern movies often show you the entire story in their two minute trailers. It’s frustrating because why would you bother seeing  a film when a trailer has spelled out every plot point in advance?

After Earth didn’t seem to fall into this category. What we saw was an intriguing concept for a sci-fi film starring Will Smith, long absent from the silver screen, and his son Jayden, who recently disproved notions of nepotism with a great performance in the Karate Kid remake.

We’re shown the pair, also father and son on film, crash landing on Earth, long abandoned by humanity. Their ship breaks in two and injured ranger Cypher (Will) must send his son Kitai (Jayden)to the tail section of their plane to activate a beacon which will get them rescued.

Along the way Kitai discovers that Earth now hates humans quite a bit, and will do anything to make sure it kills them as fast as possible. Predators that were fearsome before have now evolved into even more dangerous beasts, and Kitai must contend with rabid baboons, enormous vulture-eagles and slinking jungle lions. Not to mention poisonous insects and periodic snap freezes.

It’s what we saw in the trailer, and it’s nearly the complete content of the film. It’s a simple point A to point B mission featuring all of the above, and honestly, it’s hard to recall a less interesting sci-fi movie.

There’s just not a drop of mystery to all this. From the opening narration, it seems that we left Earth 1,000 years ago “after we destroyed it.” There’s nothing to explain how exactly all these different species underwent such massive evolutionary changes in such a short amount of time, or why Earth’s temperature now fluctuates like it’s twice the distance from the sun. Chalk both up to global warming, I suppose, and call it a day.

Stranger still, the only part of the film left out of the trailer is the inclusion of a lone race of alien beasts known as the Ursa. When humanity left earth and moved to a new system, they were set on by the Ursa who are able to literally smell fear. Certain adept soldiers can learn to turn off their fear altogether, a process known as ghosting, as it renders them invisible to the Ursa. Cypher can ghost, his son cannot. This is unfortunate considering a captured Ursa was part of the cargo in the ship that went down, and is now running loose in the forests of Earth.

The inclusion of aliens feels out of place here as they’re barely relevant to the central plot. The film could have easily worked without the Ursa, and come up with a less blatant way for Kitai to learn about “facing his fears.”

The film attempts to build itself on the relationship between the two characters that are onscreen for 98% of the film. Kitai wants to be a ranger like his father, but also hates him for being gone all the time. Cypher seems to hold a grudge against Kitai for hiding when his older, ranger trained sister was killed by a home-invading Ursa, though since Kitai was like, seven at the time, it hardly seems like a fair burden to place on his soldiers.

This is certainly a different role for Smith, as he delivers every line with a grimace on his face, even his jokes. Jayden does fine with what he’s given, but both are made to talk in odd, non-existent accents that are meant to be futuristic, but only serve to be distracting. Smith literally sits on his ass for the duration of the film, incapacitated with two broken legs, and it hardly serves to be a thrilling father son bonding adventure with that being the set-up for the film. Essentially it’s like watching two people talk on the phone for ninety minutes, and there’s only so much character development that can really come from that.

That said, the film could have been cool. I like the idea about a hostile Earth that has evolved into something sinister. But what we see just isn’t exciting or interesting. Kitai runs away from monkeys, hits some lions with sticks. That’s about the extent of the action, and there’s no exploration of the potentially intriguing concepts the film raises.

And really, this movie didn’t need to take place on Earth at all, looking back. Unlike other films in the “ruined homeworld” genre, we see exactly zero man-made structures or landmarks in their crash zone. Rather, the location of Earth serves as nothing but a platform to showcase a few animal variants we sort of recognize, as the fact that the father and son are on Earth has no greater significance to the plot past that. As I said, there isn’t a single mystery to be found in this script, and therefore the most interesting aspect is guessing which color Kitai’s suit will change to next.

A month ago, Tom Cruise’s Oblivion took an original idea for post-apocalyptic sci-fi and jammed it full of more mysteries than you could count. The result was a thrilling, surprising and borderline brilliant feature a hundred times better than this one. Really, the only twist of After Earth comes when the credits hit.

Now who could have seen that coming?

If you asked me how many Disney Princess variants we’ve featured over the past six years on Unreality, I’d laugh in your face and say I lost track at “Disney Princess Sloths.” But if you…

It’s Friday, so that means trailer time; more specifically This Week in Movie Trailers time! How is everyone doing? Long week?  Ready for a break? Too cold? Heading south soon?Ready for some new releases? Again,…

Everyone knows that Avatar was in development for a long while, but most people didn’t know about it. But Hollywood insiders heard about the project being passed around, and in 1999 seemed like perhaps the…

Jennifer Jason Leigh has talent radiating from her pores. She’s a disgustingly talented actress and yet, very few people seem to know that. I recently had a JJL movie marathon and was amazed at just…

I’ve always gotten a kick out of little movie projects like this.   Sometimes people don’t stop to realize that the most simplistic of concepts can be highly entertaining.   I mean you’ve seen how many times…