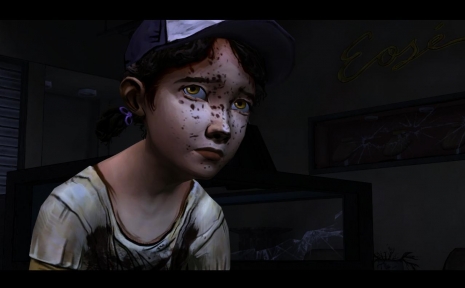 There’s really no way to avoid spoilers in this review so I won’t even try. If you haven’t played it yet and you’re still looking forward to the surprise, it’s probably best to stop reading right about now.

Even though I was excited to find out what happened in No Time Left I was more bummed that it was all about to end. Each episode in Telltale’s The Walking Dead left me on the edge of my seat and I was as excited for the release of each new episode as much as any of my favorite TV shows in recent memory. Each episode raised my expectations for the next. The closer I grew to each character the more I wanted them to get out alive and survive, perhaps even thrive, in the final episode of the series. Yeah, I should have known better. In my whole life I don’t think I’ve played a game in which I fought so hard for so many to gain so little.

First off, I am a little disappointed with the recycling of what are now clichés within The Walking Dead franchise, namely the epidemic of limbs getting sawn-off protagonists, smearing one’s self in nasty smelling walker bits, and the constant questioning of quick and painless deaths for those who are about to be eaten alive – the answer is yes by the way, if someone is about to get eaten alive, ending it quickly is the accepted social norm. I was surprised that themes and situations that were already well-worn territory thanks to the TV show and the comic were used again here for the game. With that being said, even some of the more cliché Walking Dead moments were done better in the game than in both the comic and the TV show. 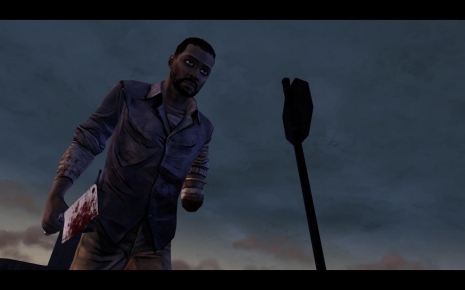 Where have I seen this before?

At the end of the last episode Lee, the game’s protagonist, was bitten by a walker – normally a death sentence for characters in this world. While that should have been the most pressing issue on everyone’s mind, and it was to some extent, we were all much more worried about Clementine, my surrogate daughter, who was taken by the strange man on the other end of the radio. Despite the obvious dangers of having someone around who has been bitten, everyone, for the first time in the game’s history, managed to put their bickering aside, mostly, to find Clementine.

It seems obvious now, but looking back the only thing that each member of the group had in common was that everyone liked Clementine. It seems that her kidnapping, theft, or whatever you want to call it was the catalyst that everyone needed to quit their bickering and work together as a group in order to find her. This pretty much represents what No Time Left is all about; everything that everyone has gone through will be worth it in some way if Clementine can be saved. If not, then there’s really no hope left. 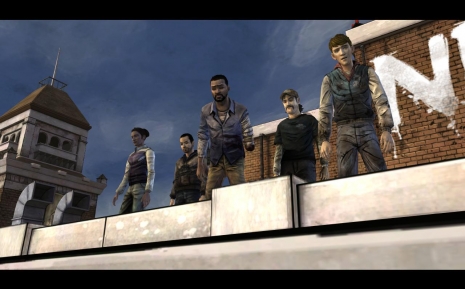 Get your game faces on everyone.

This makes episode five very different from the other episodes in the series. Lee’s bite has given him the opportunity to make all sorts of risky decisions – need a guy to jump across gaps in a building? Why not let the bitten guy do it?  Lee’s always been the group’s risk taker, now even more so that he’s on borrowed time, but everyone else in the group is much more supportive. Either it’s because they feel bad for Clementine or that Lee is about to be a walker, but for the first time my interactions with the group were downright pleasant. Of course, there’s was the nasty business of sawing off my bitten left arm, but hey that’s the apocalypse.