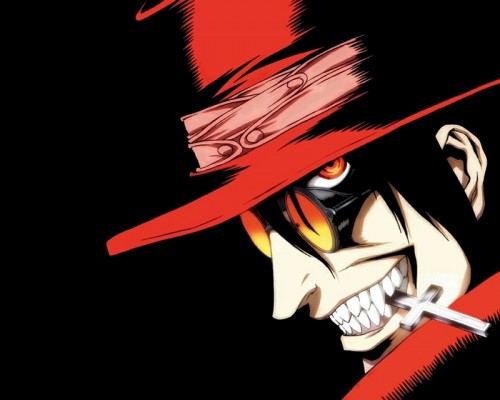 Last week, I filled your coffers/coffins with vampiric obscurities from the domain of live-action film to kick off my month-long celebration of all things nosferatu. This week, I’m giving hardcore nerd culture its due and featuring my favorite bloodsuckers from the alternative media domains of comics, anime, and video games.

And what, praytell makes these particular vampires so awesome that they deserve their own list? Well, that varies. Maybe it’s their twisted personality, or sympathetic backstory. Maybe they kick the most ass, maybe they are just plain entertaining to watch, or maybe they just look freakin’ cool. It could be all of the above; but one way or another, these lords and ladies of the night stand out from the crowd.

Great stories live and die with their characters, so instead of merely repping the series’ that spawned them, I’m going to go specifically into the characters and what makes them so goddamn cool in comparison to the thousands of fictional bloodsuckers cluttering our DVD and book shelves. Do come along. 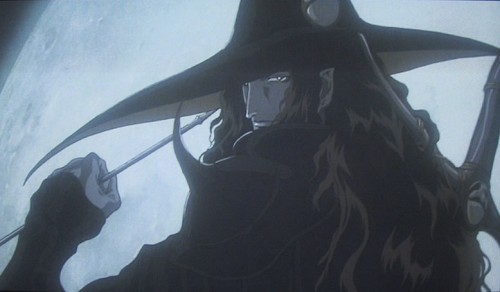 Okay, so this one is technically only a half vampire, but he is almost single-handedly responsible for my anime obsession so he’s getting a pass. The original Vampire Hunter D was something I taped from cable on VHS on impulse based entirely on the fact that it had the word “vampire” in the title. That first viewing of an old-school classic opened up an entire new world to me. When I bought my first DVD player, it was the first disc I bought and I watched it again and again; it remains one of my favorite films of all time. The exquisitely animated sequel, Bloodlust, owns the distinction of being the only DVD I have ever pre-ordered.

So now that it’s established that I’m a fan, the obvious question is why. What is it about this character that makes him such an icon? Well, just look at him: a stoic swashbuckling samurai in black atop a cyborg horse in a feudal post-apocalyptic future ruled by monsters and darkness. D and the world he inhabits represent a perfect storm of things I love.

On top of that is the character himself: a bounty hunter who specializes in exterminating the undead and keeping safe at night the very people who shun him during daylight hours.  A man and a monster who hunts his own kind and must remain alone, lest he give in to temptation and feed upon the mortal women who seek solace in his arms. His only companion is a snarky talking parasite living in his hand that manifests itself as a face in his palm and contains immense and mysterious powers of its own. D is just not the sort of character that comes along very often, but makes a huge impression when they do. 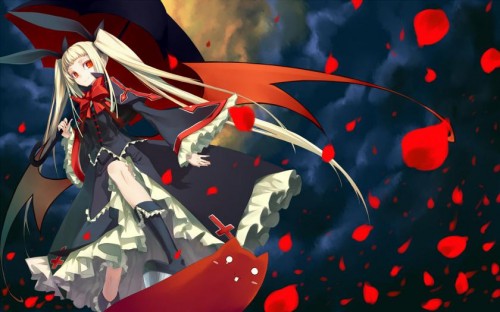 One thing that fighting games tend to lack is original characters. I don’t mean personalitywise so much as a character whose abilities completely change the way you approach the gameplay in the genre. Well, BlazBlue is the definitive outside-the-box fighting series and Rachel is one of its flagship characters.

Rachel is a vampire whose lack of physical aging has left her in the guise of a little girl. But she is actually a being of immense power who exists outside of the space and time loop that defines the word of BlazBlue and its inhabitants and is therefore one of the only characters who truly understands what the hell is going on. Her haughty, condescending demeanor doesn’t exactly endear her to the other characters, but their reactions to her make for some great comedy.

She is accompanied by morphable bat and cat sidekicks and a werewolf butler that she uses and abuses as she sees fit, and she does a mean impression of Sesame Street’s Count in her sleep, but all of this is secondary to her fighting abilities. Rachel represents a rare cerebral fighting game character whose abilities are not best utilized by memorizing combos or honing twitch reflexes. She fights by controlling space. Setting up lighting rods she can activate at any time while sending out electrified frogs like moving land mines and controlling projectiles and movement using manually shifting winds is an amazing and unique experience in a genre that is regularly a bit stale.

Rachel’s not the kind of character that’s a competitive play powerhouse, but she is a ton of fun to play as and a breath of fresh air from a gameplay standpoint. 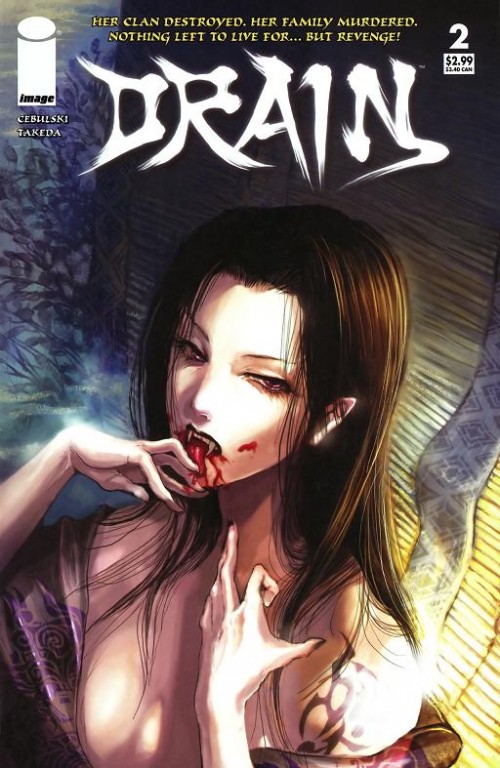 Yeah, Drain fits the bill to a T. One of my favorite comics of all time and an easy number one in terms of the quality of the artwork, anyone with a love of the immortal undead and Japanese imagery owes it to themselves to buy this book.

Chinatsu is the story’s protagonist, and is probably best thought of as a modern female Japanese vampire equivalent of The Highlander. As she chases the vampire who slaughtered her family through the centuries, she acquires a knack for trash talk and no small amount of skill with a katana, which gets plenty of use. How do you not fall in love with a vampiress who lures a scumbag into an alley, drains him of blood, and then tells him “So you probably expected to come out here and get some head, huh?” before decapitating him and quipping “So did I”.

In spite of her cynical sense of humor, Chinatsu differentiates herself from most other ass-kicking vampires because she is an emotionally vulnerable woman underneath it all. The typical vampire hero is stoic creature, but other interpretations of the vampire have them as characters with enhanced emotions to go with their other enhanced senses. This adds an element of sadness to Chinatsu’s story of love, betrayal, and revenge.

The story itself is rather straightforward, but the quality of the visuals and writing more than make up for a lack of innovative storytelling. Drain is the most underrated comic I’ve ever read, and its heroine is one of my favorite vampires ever. 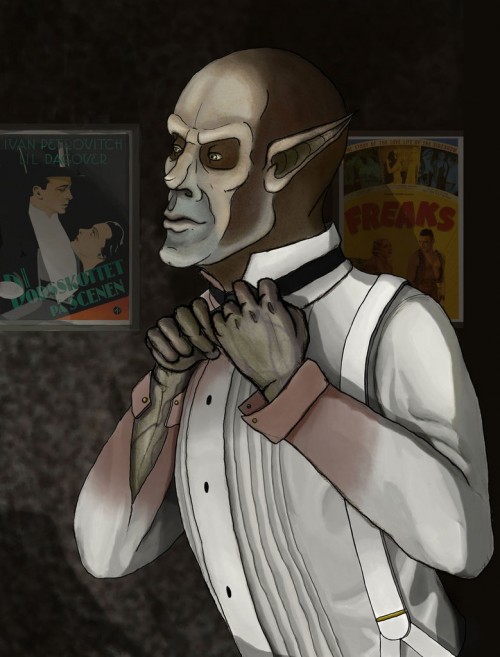 Vampire: The Masquerade – Bloodlines is a nearly decade old PC single-player role playing game that enjoys a strong fandom to this day. And with good reason. The gameplay is standard and fairly Bethesda-esque, but what sets the game apart -other than being an extremely rare instance of being a really exceptional vampire game-is the writing and the characters that inhabit the game’s world. There are at least five characters that could have made this list (including mai vamp waifu, VV), but I decided on good ol’ Gary Golden this time.

Gary used to be famous actor during the classic days of Hollywood. That was, of course, before he was turned by a member of the Nosferatu clan. In Vampire: The Masquerade mythology there are many clans/species of vampires, each encompassing varying abilities and worldviews. Most of the clans appear as humans to the naked eye. The Nosferatu are not one of those. They occupy the sewers and pride themselves on their ability to be practically invisible, making them voyeuristic by nature, and therefore excellent information brokers. Gary is the head of the clan, but he’s clearly still got some issues to work out.

What I love about this guy is his easygoing creepiness. His manner of speech, his room in a cavern featuring the most morbid mock dinner party ever where he taunts you from the dark by telling you he may be the voice in your head; yeah, this is my kind of dude. Here, I’ll let you see for yourself.

As a bonus to encounters like that, if you do some more favors for him over the course of your travels, he delivers to your apartment posters of the lovely ladies of Bloodlines in states of undress, which implies some rather sordid interests. Not that I don’t approve of the end result. Get on with your bad self, Gary! 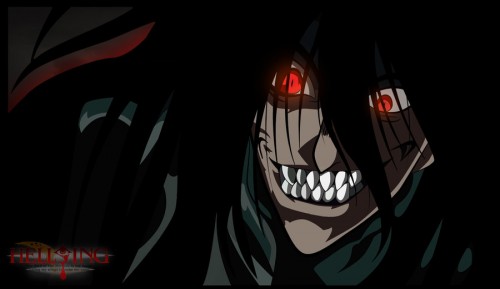 Who else could anchor a list of the coolest rulers of the night from entertainment genres outside of the mainstream but Hellsing’s own “immortal, invincible, undefeated , and almighty” Alucard? If there is such a thing as being too badass, than this guy is the poster boy for it.

Fun fact: the original television series Hellsing was the very first (cringeworthy) review I ever wrote over ten years ago. And here I am all that time later shilling for the superior remake series Hellsing Ultimate. In a way, Alucard inspired me to be where I’m at right now: writing on the internet about stuff only I like so that other people to ignore and ridicule me. Thanks, big guy.

So anyways, Alucard is anime’s ultimate avatar of badassness. A character so sinister, so sadistic, so twisted, and so overpowered in his abilities that it’s almost impossible to believe he’s the hero of the story. But when battling Nazis, everybody who is not a Nazi automatically becomes a good guy by comparison. This iteration of the legend of Vlad Tepes he has been subjugated by the Hellsing organization, an English protestant strike force dedicated to wiping out the undead. And yes, I’m sure they appreciate the irony that their most potent weapons are vampires.

Alucard typically uses dual pistols with blessed bullets made from melted down crucifixes to dispose of his targets, but that’s just for fun and cool factor. His true power is almost unlimited as he contains the sum life forces of every soul he’s consumed over centuries of existence, which is to say he is quite literally a one monster army with abilities limited pretty much by his own imagination.

That’s all well and good, but what makes him the coolest is his swag.

Whether battling a superpowered fellow vampire without leaving his chair or goading his superior, fellow badass Integra Hellsing, into ordering him to wipe out a squad of humans, the dude just revels in carnage. And when it comes to Hellsing Ultimate, carnage is both the journey and the destination. Amen.

It’s yet another “If George RR Martin Wrote” image from JoyofTech, and you’ll remember the last time they did this for Breaking Bad no doubt. Neither of these shows fit too terribly well into the…

(click to enlarge) I don’t care how many lights you put on your house this year, you will never have a cooler Christmas decoration than this set of Calvin and Hobbes stand-ups. I’m not sure…

Ever since Tony Jaa retired from acting to be a spirit monk in the forest or whatever insanity consumed him, there has been a distinct void in the action genre. There hasn’t quite been a… 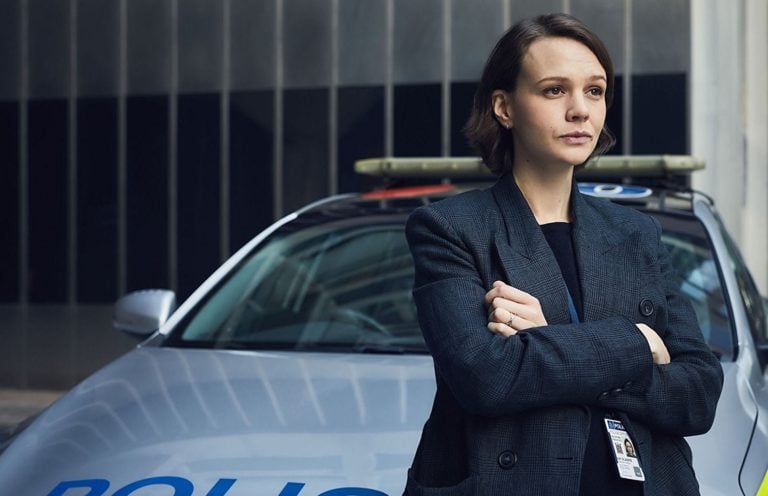 Britain has a vibrant entertainment industry that has provided us with some of the most engrossing and entertaining TV shows of all time. Although drama and comedy are two of the most popular genres in…

No, sadly this does not actually exist, so sorry to bust your bubble right off the bat. But with everything that’s ever existed getting its own version of Monopoly (I just saw Detroit Monopoly, seriously),…

Gamemoir meets Unreality EP. 1- Grand Theft Auto V by Gamemoir on Mixcloud Benny’s new site Gamemoir crossed over with Unreality this weekend as we both met up (virtually) for a podcast to discuss, what…