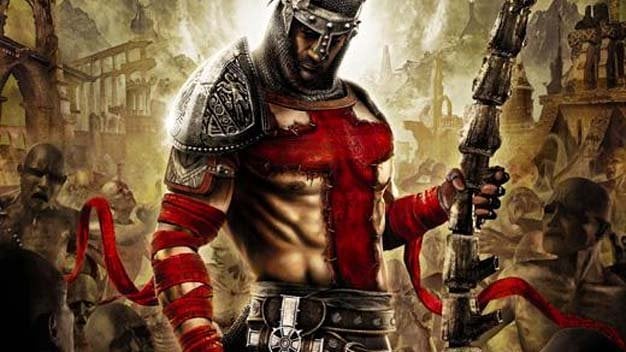 Let’s be honest here, Dante’s Inferno IS God of War. People always go back and forth between arguing over who stole what between the Devil May Cry and Ninja Gaiden and God of War series, but those comparisons pale to Dante’s Inferno‘s blatant and unapologetic hijacking of nearly everything GOW has done.

You can argue that God of War has established a new sort of genre of these hack and slash adventure games (though it didn’t), but it gets to a point where if you use not only the exact skeleton the series has created, but the muscle and flesh as well, you have to wonder when it starts to dip into plagiarism. However, what’s been stolen from GOW has made Dante’s Inferno a very fun game in itself, albeit a mere shadow of the classic franchise that “inspired” it. It doesn’t bring a whole lot new to the table, but its artistic direction alone is something to behold, it’s unquestionably fun to play, and it’s definitely worth a weekend rent if you’ve got a few spare hours to kill.

We’ll start where the two games diverge, the story. Rather than a Greek warrior on a mission to kill the God of War, we have Dante, an 11th century crusader (not poet) raiding the depths of hell on a mission of rescue to find his love, Beatrice, who has been taken from him. On his way down he finds he must face many of his own sins, and he’s not the holy hero we might have initially expected. 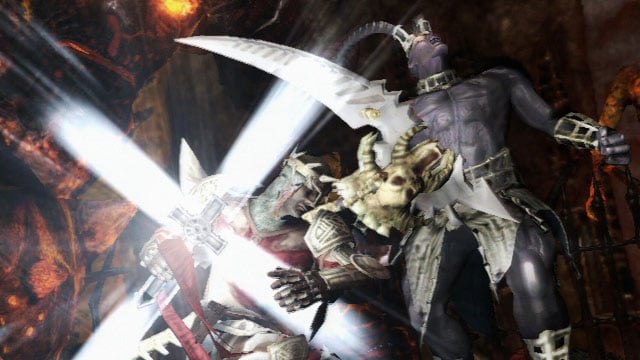 Sure, he kills demons with a cross, but he’s far from a saint.

I will say that this plot does strike me as rather cool; a rogue knight set to face his own demons in hell is a concept I can get behind and it has a bit of a Silent Hill 2 flair to it. But the problem is, the plot is butchered by inanity, as the reason for all this misfortune is revealed early: While off on a crusade, Dante accepted sexual favors from a heathen local in order to free her brother from jail. This leads to a chain reaction that ends up with his father, his wife and nearly himself dead, and everyone moaning about Dante’s “unforgivable betrayal.” Sure it’s a dick move, but eternal damnation for you and your entire family for two minutes of consensual fun? That’s Catholicism for you I guess.

Dante’s wife, in addition to being dragged to hell, finds that a good way of payback is to show her tits to absolutely everyone and anyone, on both earth and in hell. Seriously, this woman is topless for a solid 80% of the time she’s onscreen, and it crosses the line from “provactive” to “laughable” almost immediately. I can’t remember just when the last time there’s been so much unnecessary nudity in the game, and that’s all before we see Lucifer’s giant hairy swinging dong during the final boss battle.

But anyways, enough sex and back to violence. Dante must hack his way through legions of demons in the various circles of the original poet Dante’s hell, which contains rings for the seven deadly sins, which make for some of the best level and creature design I’ve seen in recent memory.

Lust is a palace made entirely out of genitalia. The columns are cocks, the doors are vaginas, and the enemies are naked demons that seduce Dante and try to strange him with tentacles coming out of their snatches. Gluttony is a cavern made out of blubberous fat and organs. Gnashing teeth try to eat you and giant piles of fat puke and shit on you. Lastly, Greed is fortress made out of gold, filled with gold statues sitting on rivers of liquid gold. Here you’ll find demons with two bickering heads, swinging giant maces…of gold. 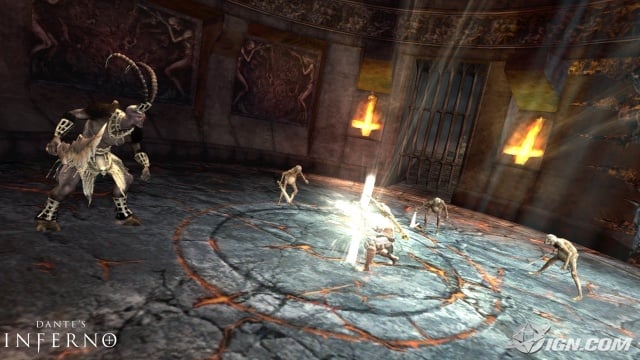 The amount of detail in the level design is pretty damn amazing.

But after these first few theme-based levels, the game begins a steady slide downhill. There are about 55 different circles in Dante’s hell, and the game has to blaze through some of them at a million miles an hour. The levels get less and less distinctive as the rings gets less and less cool (once you get to the “Flatterers” and “Politicians” rings you’ll start rolling your eyes) and the formerly creative unique enemy types resurface despite the fact that you’re no longer in their section of hell. Little details could have made this work, like if you’re going to bring a Gluttony baddie into Greed, at least put a little gold crown on his head, but alas, the operative word in the second half of Dante’s Inferno is “rushed.”

The last section of the game is something that’s equivalent to most games “challenge modes.” You know, where you have a certain amount of time to beat all enemies with one combo, all air moves, or while rapidly losing health? Usually this mode is found separate from the main game, as something to occupy your time after you beat it, but no, Dante’s Inferno places them squarely in the middle of the quest, acting like it totally didn’t do anything out of the ordinary. Oh Lucifer wants you to kill all these enemies using only aerial combos? Well sure, that seems natural!

It’s nice to see a game that has a legitimately challenging final boss battle for a change, and the fight against Lucifer had me tearing my hair out just enough times not to get completely fed up before I finally beat him. The end is clearly open for a sequel, but if you’re really surprised about that, I think there’s a special circle in hell for idiots. 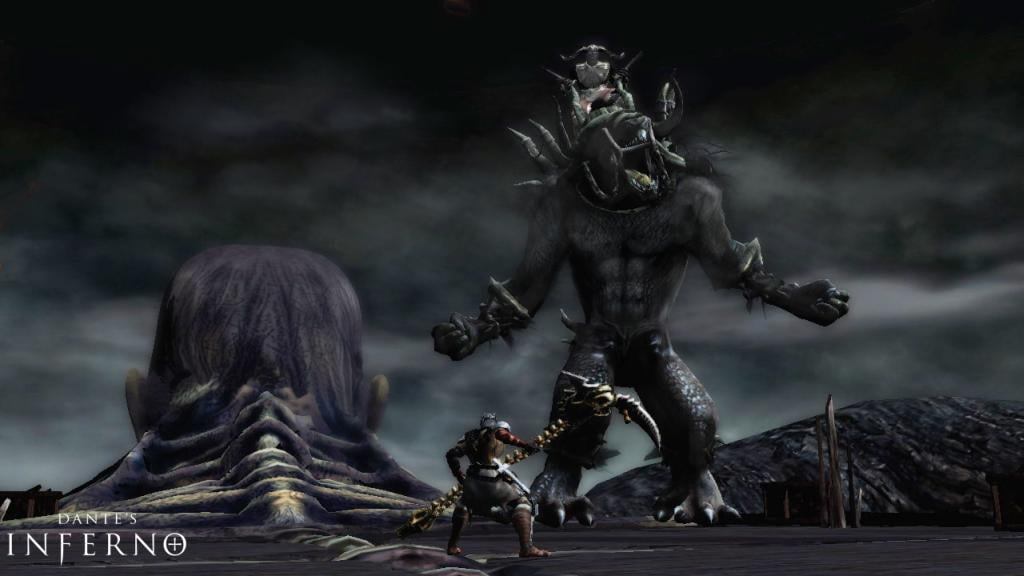 The obligatory “giant enemy you can ride and kill shit with.”

But enough of the story and design, what of the gameplay? Well, outside of having the exact same control scheme, melee, magic, life, platforming and experience systems as God of War, there’s really only one difference worth nothing, and it’s that the game has a “moral choice” system embedded within. As you’ll recall, Kratos only really ever had to pick between “disembowelment” and “dismemberment,” and would put a Blade of Chaos through your face before you could even finish the phrase “moral choice.”

Dante on the other hand, has the power to “Punish” or “Absolve” demons and lost souls he finds along the way. Punishing upgrades your scythe and gives you a bevy of combos to work with. Absolving strengthens your holy cross (a projectile) and upgrades your defensive capabilities. It also completely breaks the game. Let me explain.

For my playthrough, I chose to Punish everyone because it was quick and easy and didn’t involve the same idiotic Guitar Hero button sequence Absolving did. However, as good as my scythe got, when fighting any halfway powered enemy, single moves would cut my health in half almost instantly, and I kept dying like I was playing Battletoads and I even had to knock the difficultly down at a few insane moments just to move on (as the game likes to schedule big unavoidable battles when you happen to be the lowest on health). I finally crawled my way through the game, thinking it was a pretty challenging, but fun experience.

However, I then watched my roommate take a different path in his game, Absolving all the sinners as he went (despite the fact that Dante is in no way a priest and actually kind of an evil motherf*cker who shouldn’t have the power to send anyone to heaven). HIS upgrades and relics yielded a playing experience that was a mirror image of mine. By the end, he had A) A damage reducing upgrade B) A damage reducing relic C) A magic move that cause him to be invulnerable AND regenerate life and D) An upgrade that had enemies give him extra life when they croaked. Add in the power of the upgraded holy cross to the mix, which pushes enemies back with each hit so they can never actually reach you, and he was strolling through the game like it was Candyland instead of the bowels of hell. Battles that took me thirty minutes he danced through in five, all because he had the ability to refill his entire life bar three times over before he came anywhere near death, not to mention he barely took any damage to begin with. 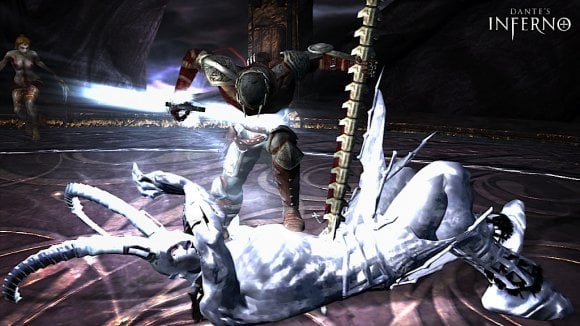 “The power of Christ compels you motherf*cker!”

And if you  thought that there would be some difference between a path of killing damned souls (who I thought were already dead?) or irresponsibly sending them to heaven (I’m sure Jesus will be thrilled to see Pontious Pilate again), you’re wrong. Both endings for the game are exactly the same, and the only difference is whether or not you want your journey to get there to be literal hell or delicious cake.

Aside from its complete and utter lack of balance, Dante’s Inferno is a genuinely fun experience for the most part. The level design is often brilliant, the combat is fast paced and the storyline shows signs of being somewhat interesting. Any game that steals absolutely everything from God of War is likely to have stolen a little bit of the fun as well, and Dante’s Inferno makes a nice stop gap until GOW3 finally comes out, or for us Xbox players, lets us taste a sample of just what makes the GOW series so good.

If the end hadn’t been rushed, and the holy path didn’t completely destroy all semblance of fairness in the game, Dante’s Inferno would have pushed itself out of purgatory and into heaven. But what we have instead is a decently fun, but unfinished game that does everything its mentor did, but slightly worse. It’s a noble effort, but it’s a little too plagiaristic for my tastes.