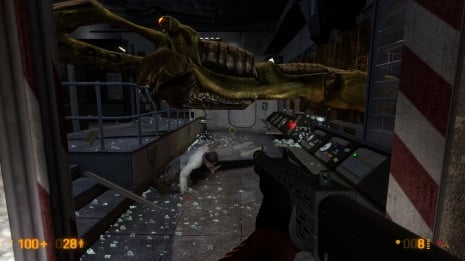 I really wasn’t planning on reviewing Black Mesa in any capacity this week as it’s not really a game in the traditional sense. But after sitting down to play it this weekend and going through the Black Mesa research facility once again I realized that it really doesn’t feel like a game I’ve played countless times before. Sure all of the key ingredients are there; the story is the same, as are the puzzles, maps, and enemies, but it all seems a bit more real. You ever come back to a game years after playing it only to think to yourself, “This isn’t what I remember?” Well Black Mesa is the opposite of that; it’s what the original Half Life looks like in my head when I think back to it.

For those of you that don’t know, Black Mesa is what’s referred to as a total conversion mod, and it’s a complete recreation of Valve’s 1998 hit Half Life. A team of 40 volunteers spent eight years painstakingly recreating Half Life within Valve’s Source Engine; complete with updated graphics, sounds, music, maps, and a ton more subtle details. There’s no money involved, they didn’t make a dime off of the project, they’ve done this because they’re fans of the original, and have released it for free for anyone who wishes to play it. It might not have the same impact the original did all those years ago, but it’s a worthy tribute to the game that helped make Valve what it is today. 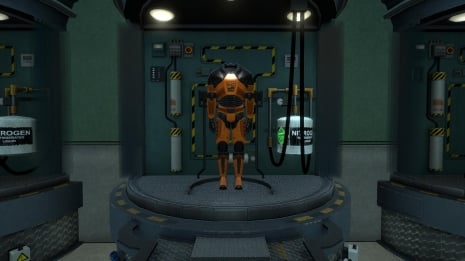 Before getting into the subtle details I figured I would start with all of the basic housekeeping. They’ve added achievements which are pretty much mandatory these days and while some of them are for basic combat and gameplay progression, there are some fun ones that reward more inventive players. Towards the beginning I was given an achievement for tossing a roll of toilet paper to a scientist crying for help in a bathroom stall.

In the original the player was limited to sprinting and using the flashlight in bursts with a kind of stamina bar that required a recharge time. In this version there is no stamina bar, you can run and shine your flashlight as much as you like. There are also some basic options and gameplay changes that weren’t in the original and they’ve updated them to account for what players expect in a modern game. My favorite change is that the AI now moves out of my way if they’re blocking my path, offering an apology as well. Now that’s progress.

Dr. Kleiner and Dr. Vance looking a bit more dapper this time around.

The game seems more difficult than the original, but I don’t think they actually made it any harder. It’s more likely that I’m either not as good as I used to be or that I’m so used to the hand-holding of modern games I’ve become rusty. Either way I died a lot more than I normally do.

Basic gameplay changes aside, there are a ton of other subtle changes that flesh-out the existing story. Barney, everyone’s favorite security guard turned hero, is missing from where he was in the original HL most likely to account for his actions during Valve’s first expansion, Blue Shift. The security guard that takes his place mentions Barney’s conspicuous absence, assuming he spent the night drinking. It’s not only a funny exchange, but also a patching of the plot hole created from Blue Shift.

The scientists and security guards that roam the halls, giving the facility life have all undergone some sort of change. For starters they all look different. I don’t mean they look different from HL they look different from each other with less reusing of character models. On top of being more realistic it’s also nice to not have to interact with 40 different versions of Dr. Kleiner. They not only speak to me, but to each other as well, and there are plenty of Easter egg conversations between them. At one point I overheard two scientists have an Office Space-like conversation about TPS reports, with one asking the other to come in and work on Saturday. It’s these types of simple changes that give life to the Black Mesa research facility in a way that simply wasn’t in the original. 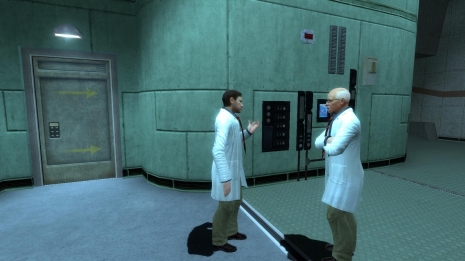 Just two scientists arguing over the value of TPS reports.

These types of humdrum changes are important because it feels like just another boring day at the office. They’re not all talking about their research and how important it is, there’s nothing special about this particular day, no one has any idea that they’re about to dramatically change human civilization forever, making it that much more shocking when disaster finally does strike.

In the original it seemed as if everyone knew me (Gordon Freeman) because they either liked me or simply because I was the main character, but in Black Mesa I get the distinct feeling that everyone is being nice to me for an altogether different reason. I had thought that I was special in some way, that I was smarter or more educated than everyone else and therefore was deserving of the praise everyone seemed to garnish me with. But Black Mesa has given me a different opinion as to what was really happening, and perhaps it was there all along.

They’re not being nice to me because I’m special; they’re being nice because I could drop dead at any moment while doing my job. I’m the sucker that’s forced to wear the H.E.V suit, walking around in the most dangerous room in the facility. It’s not kindness I’m being showered with, it’s guilt. I’m just a guinea pig; no one else wants to go in that awful room so I have to. Maybe I was supposed to get this while playing the original or maybe it’s just something that exists only in Black Mesa but it brings a new dynamic to the game’s plot that for me didn’t exist before. 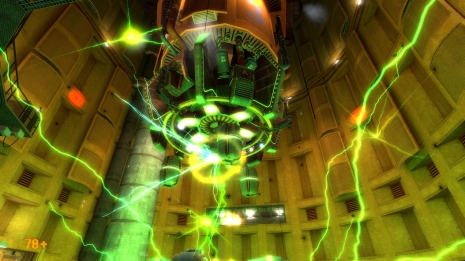 I think I broke it.

That’s really the heart of what Black Mesa is; a more subtle and polished version of the original. The story is the same, but the extra polish has revealed nooks and crannies that were perhaps hidden all along.  Gordon Freeman could be everyone’s favorite scientist or he could just be everyone’s favorite lab rat. Maybe that explains why every character in the Half Life universe greets me with a hearty “Gordon!” I had thought that it was out of excitement, but now it could also just be from the surprise in seeing their lab rat survive and make it that far.

In some ways the game is almost a parody of itself, and not in a bad way. But Black Mesa has the luxury of over ten years of feedback from the Half Life series, which was wrapped up and placed back into the game retroactively in Black Mesa. Many of the subtle jokes that became the hallmarks of HL2 have traveled backwards into Black Mesa. Maybe they made it the game it always should have been or perhaps they just smoothed out the edges that were always there.  Either way it was fun to visit Black Mesa once again.