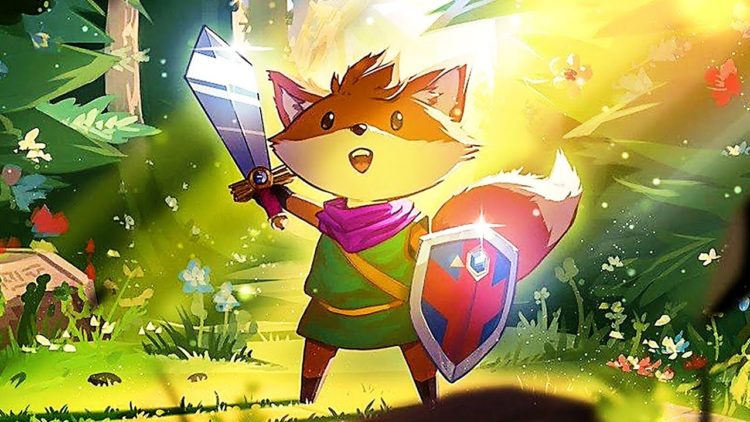 Sometimes what’s old becomes new again. Tunic is a new action RPG that has been in development for quite a few years by lone developer Andrew Shouldice. Even though this game was supposed to come out back in 2020, the decision was made to postpone it for a couple of years to polish it to perfection. Now, it is obvious that the inspiration of this indie came from the classic Legend of Zelda games during its 16-bit era. What sets it apart is the fact that everything is seen through an isometric view that’s synonymous with 8-bit games like Marble Madness and Snake Rattle n’ Roll. Players will take control of a fox who brandishes a sword and shield who is on a quest to rid his world of evil. The most recent trailer showed off a myriad of gameplay mechanics and it’s a lot to digest. However, there is no doubt that this game was meticulously crafted through the eyes of childhood innocence and nostalgia.

Right now, the overworld is mysterious and quite cryptic. Despite this game’s playful and charming demeanor, Tunic comes with a rather steep level of difficulty. This may be surprising to some players, but it’s something to keep in mind before jumping in. Nonetheless, this game has oodles of potential and hopefully, the developer will address the little issues it has before release. With that said, there is a lot to find and explore with Tunic. Even though the fact that it’s inspired by other noteworthy titles, it very much has its own voice. It is apparent that this game was carefully pieced together over a long period of time and it came together to be a rather solid little indie to keep an eye on.

Tunic definitely has a lot going for it. Its colorful and cutesy aesthetic may turn off some of the seasoned gamers out there, but don’t be fooled. This game is aiming to be a rather hardcore adventure. The text found in the “talking bubbles” that are synonymous with the Legend of Zelda games. The thing is that the language spoken is of an otherworldy dialect that is somewhat similar to Sanskrit. So, at the beginning of the game, players will be fumbling around the world trying to make of what is going on. It very much provides a “fish out of water” dynamic and feels like you have been warped to another world. It’s a fair bet to think that this language can be translated into English or other languages. Whether a relic needs to be found or maybe it happens on its own during the story remains to be seen.

The world seems to be rather large and it can be a jarring trek getting point to point. Luckily, there will be permanent shortcuts to activate that can help bypass dangerous areas and save time just like in the Dark Souls games. Yes, this world is crawling with an assortment of baddies that are doing everything they can to kill you. The thing is, players will start the game with literally nothing to fight will. They will need to poke around while under fire to find something to fight with. Eventually, the fox will find a large stick to smack enemies with, later on finding a more suitable sword and shield. It’s a slow process and it makes the start of this adventure feel very naked and vulnerable. Which what most likely the intention of the developer. The world appears to be fully explorable, with the only limitations being the power level of the fox.

Not to worry, Tunic does come with in-game guides to help iron out any questions players may of. What makes this game all the more appealing is that these guides look like the manual booklets that kids were forced to use during the 80s’. They weren’t exactly the most helpful reading material out there, but it was all they had. When it comes to this game, these manuals just heighten the mystery and make the title more engrossing. There are secrets, hidden passageways, and dungeons to find. Players will be able to save their progress through the use of shrines. However, this also makes all the enemies respawn. So, it’s a trade-off to keep in mind for sure. This game very much has a strategic element to it that’s not found in other games of its kind.

The combat operates with a “lock-on feature” that was found in Ocarina of Time. Blocking, strafing, and timing attacks will be the only way to take down enemies during encounters. Of course, the fox won’t be empty-handed, either. He will end up finding other tools to use. Things like bombs, ice powers, and a neon whip are all on display with the trailer. To complement the art design, the music has a mystical synth-wave vibe to it that couples nicely with the retro neon architecture found in some of the areas. It’s a fresh take on the RPG genre and it also gives a feeling of nostalgia to it, in many cases. The enemies found in this game are varied, mean, and unrelenting. Everything from giant skeletons, black knights, bouncing blobs, and laser turrets will be waiting around every corner.

Even though this game has been under development for a while, many people within the gaming community never forgot about it. The charm of Tunic has memorized a whole generation of gamers that missed out on action RPGs of yesteryear. There is a demo currently available for Xbox users and it gives a look at what to expect. With that said, gamers who have been itching to play this won’t need to wait much longer. This game is slated to be released this coming March. Upon launch, Tunic will be available to play on Xbox consoles and PC. Currently, there are no plans to release this game on Playstation or other consoles. Of course, never say never. Stranger things have happened within the gaming industry.